Jack R. Wilhelm was born in Fulton, Kentucky on July 28, 1903, according to a passenger list at Ancestry.com. In the 1910 U.S. Federal Census, he lived with his mother, younger sister, and maternal grandparents in Oklahoma City, Oklahoma at 218 East Sixth Street. The name of his father is not known or what happened to him. Ten years later Wilhelm remained in the same city but at 300 East Sixth Street. He was not employed.
Information about Wilhelm's art training and how he started in comics has not been found. Apparently he moved to New York City in the 1920s. Starting in 1927 he produced Meet the Misses for the McClure Syndicate; the panel ended in 1929. His next McClure strip was That Certain Party which ran in the Rockford Republic (Illinois) starting on August 6, 1928; it was undated but numbered in most panels. The main character, Mary Ellen, resembled actress Louise Brooks.

In some papers, such as the Rockford Morning Star (Illinois), the strip was known as Mary Ellen. A few years later, That Certain Party evolved into Nancy (Norton) which was published in the Morning Star from April 5 to May 16, 1931.

Wilhelm has not been found in the 1930 census. In the summer of 1931 he was on another strip but with a different syndicate. The Morning Herald (Uniontown, Pennsylvania), published the Central Press announcement, on July 20, 1931, of the debut of Frank Merriwell's Schooldays. Almost three years later the strip was re-titled Chip Collins' Adventures with Wilhelm still at the helm. Another artist, Paul Frehm, handled some of the art chores; years later, Frehm would be the artist on Ripley's Believe It or Not. 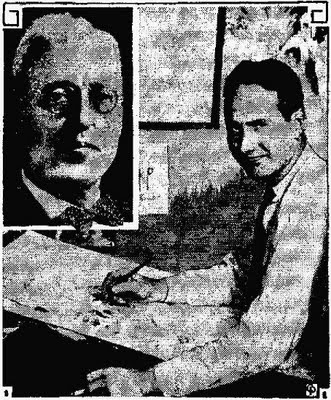 The first two Frank Merriwell's Schooldays strips.
A record of his World War II military service has not been found. Wilhelm passed away on April 25, 1945, in Hines, Illinois. The Rockford Morning Star (Illinois) reported his death the following day.
Artist for Chicago Newspaper Dies
Hines, Ill., April 25.—(AP)—Jack Wilhelm, 42, staff artist for the Chicago Herald-American, died today in Hines Memorial hospital.
Wilhelm, formerly a King Features syndicate cartoonist, came to the Herald-American following his discharge from the army six months ago. He was a native of Kentucky.

Comments:
Whatever happened to the obscure strips? All we ever see anymore are census records from ancestry-dot-com and cartoons taken from ChroniclingAmerica online and The NewspaperArchive sites from this Alex Jay guy.

Thanks D.D.! Counting down the days to the 1940 census coming to Ancestry.com.