Louis Franklin van Zelm was born in New Rochelle, New York on December 9, 1895, according to his World War I and II draft cards. He has not been found in the 1900 U.S. Federal Census.
The next census recorded him in New Rochelle, New York at 8 Banker Place. He was the oldest of our children born to Louis and Nettie. His father, a Holland emigrant, worked at an insurance company. The Portland Press Herald (Maine), August 13, 1949, said he graduated from Lawrenceville Prep. The New Rochelle Pioneer noted, on April 14, 1917, "Franklin van Zelm of this city, has won high honors for architectural students. He is a junior of the Massachusetts 'Tech'." He signed his World War I draft card on May 26, 1917. He was a student at the Massachusetts Institute of Technology. His description was tall, slender, with blue eyes and brown hair. The National Cyclopaedia of American Biography (1971) said he married Jane Morrison in 1918.

In the 1920 census, he lived in New Rochelle on Overlook Road. His occupation was vice president at a metal company. For the New York Evening World, he drew the strip Rusty and Bub.

Evening World, 3/1/1920
During the 1920s he contributed cartoons to the Larchmont Gazette, and drew Such Is Life. A 1925 issue of The Technology Review (Association of Alumni and Alumnae of the Massachusetts Institute of Technology) noted van Zelm's career changed.


...All the yellow journals through the Middle West in mid-December printed long stories to the effect that L.F. van Zelm, whom we all remember as the best little cartoonist we had during our days at the Institute, has deserted architecture for cartooning, and is now cleaning up hordes of shekels as the perpetrator of a comic strip which makes a daily appearance in the dailies throughout that section. I feel sure all the gang join me in wishing Van the greatest success.


The couple lived in New Rochelle on Wilmot Road, according to the 1930 census. On November 19, 1938, the Herald Statesman (Yonkers, New York) reported van Zelm's collaboration with Darwin J. Adams on a children's book featuring two white mice, The Adventures of Monte and Molly. 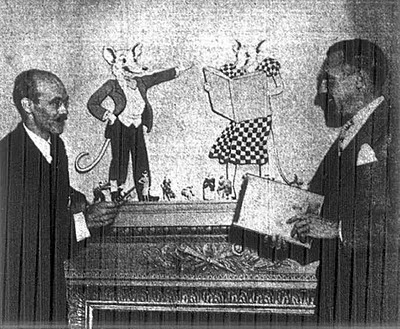 On April 25, 1942, he signed his World War II draft card. He lived in Boston, Massachusetts at 326 Commonwealth Avenue. He worked for the Christian Science Monitor. He was five feet ten-and-a-half inches tall, 155 pounds, with blue eyes and blonde hair. The Rockford Register-Republic (Illinois), in its December 13, 1954 issue, said he was on the Monitor staff from 1940 to 1947. The Portland Press Herald reported his August 12, 1949 marriage to Marie Jeffrey Miles. The couple lived at Summit Spring Manor in Maine. The Sun Journal reported his contribution to the community on June 8, 2009:


The story goes that the top of Summit Hill is a breeding ground for bald eagles because they can catch the high winds and hover.

It was that view that apparently inspired L. Franklin Van Zelm, owner of the Summit Spring Hotel and water bottling company, to redesign the water bottle's label in the 1930s to include the iconic eagle….

...Although the water had been sold for medicinal uses since the 1870s when the Summit Hill House opened, it was Van Zelm who first used the brown bottles with the eagle label, said Taja Dockendorf, principal of T. Doc Creative in Portland and designer of the limited-edition retro label.

Van Zelm, an illustrator for the Christian Science Monitor, is credited with redesigning the label to include the eagle. In 1936, he built the beautiful spring house that encloses the water source, reviving the bottling plant that sits about 50 feet downhill and shipping the bottles to places like S.S. Pierce in Boston and even overseas….


The National Cyclopaedia of American Biography said his third marriage was to Marie Silver on June 21, 1954. The News and Courier (Charleston, South Carolina) reported, on February 20, 1955, that van Zelm filled his 50-room house, an old hotel, with gnomes and elves, and drew the daily cartoon, The VanGnomes, for the Christian Science Monitor. In 1958 he produced the strip Farnsworth.

Van Zelm passed away March 24, 1961, in North Adams, Massachusetts, according to the March 26, Springfield Union (Massachusetts).

Comments:
Franklin Van Zelm's 3rd wife, Marie Silver, was my aunt.
Loved reading about pieces of his life I'd not heard before. I have some photographs of him if they would be of interest.

Van Zelm drew a very well-drawn and very funny daily comic strip titled "Aw, What's the Use." I discovered it by looking through the microfilm of The Bradenton (Fla.) Herald at the Bradenton Public Library. It was the first comic strip to run in that paper, starting Monday, May 7, 1923. That paper didn't seem to run it every day, but most days it ran the strip. I suppose that some days they didn't have room for it. It was copyright Western Newspaper Union. I didn't reach the last appearance of the strip in my research yet, but I will get back here with an update when I get the answer. It was the only strip running in this paper at the time. It was drawn in a clear line style reminiscent of George McManus and featured a man and his wife. It had a small narrow panel as the first panel, sort of like a title panel with a pictorial element that previewed the storyline.
Collin Kellogg