Louis Wilfred "Lou" Hanlon was born in Brooklyn, New York on October 12, 1882, according to his World War I and II draft cards; his full name is from Who's Who in American Art, Volume 2 (1938). In the 1900 U.S. Federal Census, he was the oldest of five children born to Michael and Jennie. They lived in Brooklyn at 139 Cumberland Street. His father was a printer and he was a designer. The date of his move to Pennsylvania is not known. Who's Who said he was a pupil of the Pennsylvania Academy of the Fine Arts, Drexel Institute, and the Pennsylvania Museum and School of Industrial Art.
In 1910 Hanlon lived in Aldan, Pennsylvania on Providence Road, just west of Philadelphia. He was a newspaper artist. He signed his World War I draft card on September 12, 1918. He lived in Philadelphia at 1022 Walnut. His occupation was newspaper artist at the Public Ledger. His nearest relative was his wife Anna. He was described as medium height and build with brown eyes and hair. 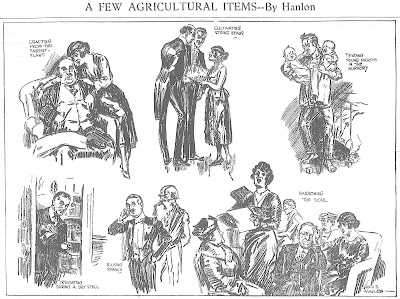 Brooklyn Daily Eagle 4/4/1920
The 1920 census recorded the couple in Philadelphia at 277 Eleventh Street. He continued as a newspaper artist. In the Brooklyn Daily Eagle, he followed Charles D. Mitchell on Follies of the Passing Show, starting on April 4, 1920. The New York Times, May 6, 1954, obituary said, "…Mr. Hanlon had worked for The New York Journal, The Chicago Tribune, The Philadelphia Ledger and Philadelphia North American." A 1924 issue of Printers' Ink reported that he joined The Ben Dale Company, advertising art, in New York. According to the Times, he was an original staff member of The New York Daily Mirror, which he joined in 1924.

According to the 1930 census, he lived in Richmond Hill, Queens, New York at 90-06 107 Street. The newspaper artist had married when he was 36 years old. His daughter, Cecelia, was eight years old. In November 1935, a Society of Illustrators benefit show offended a few members in the audience, and five artist's models were arrested. Hanlon was among the group of six illustrators who appeared in court. In the mid-1930s he produced The G-Man.
On April 25, 1942, he signed his World War II draft cards. He remained in Richmond Hill at a different address, 86-31 105 Street. He worked for the Daily Mirror. His description was five feet seven-and-a-half inches, 150 pounds, with brown eyes and gray hair. In March 1946, he was a member of the National Cartoonists Society.
Hanlon passed away May 5, 1954, in New York City. The Times said he died "…of a heart ailment. He was a charter member of the Society of Illustrators and a member of the Silurians, a society of old-time newspaper men; the Philadelphia Pen and Pencil, and the Circus Saints and Sinners. Mr. Hanlon was an amateur astronomer and actor and an authority on Shakespeare and Gilbert and Sullivan." He was buried at the Saint John Cemetery in Middle Village, New York.