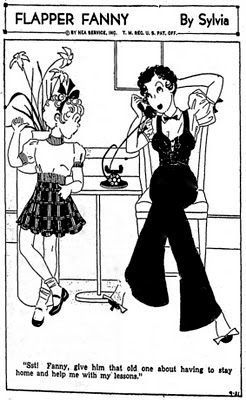 Sylvia Sneidman was born in Maryland on November 16, 1909, according to a 1931 passenger list at Ancestry.com. In the 1910 U.S. Federal Census, she was the youngest of two daughters born to Maurice and Rose. They lived in Baltimore, Maryland at 2820 Parkwood Avenue. Her father was a traveling salesman. In 1920 they lived in Newport News, Virginia at 76 33rd Street. The Sneidmans moved again, to Pittsburgh, Pennsylvania at 5821 Phillips Avenue, according to the 1930 census. The Sun (Baltimore, Maryland) reported, on July 10, 1931, that Maryland Institute students, including Sylvia, had reached Europe‎. She returned from the trip on August 14, 1931, in New York City, as recorded on a passenger list.

She found work at the Pittsburgh Press. The June 20, 1934 Press published her fashion drawings. The Star (Wilmington, Delaware) published her illustration for a serial story on May 12, 1935. Flapper Fanny Says was revamped and retitled, Flapper Fanny (above), with Sylvia, beginning on December 8, 1935.
Her marriage was reported in the Press on April 17, 1937.

Former Pittsburgh Artist Weds in East
Mr. and Mrs. Maurice Sneidman, of Shady Ave., have announced the marriage of their daughter, Miss Sylvia Sneidman, to Dr. Sidney Robbin, son of Mr. and Mrs. Robbin of New York City. The ceremony took place yesterday in New York, where the couple will reside.
The bride is a graduate of the Maryland Institute of Art, where she was winner of a traveling scholarship on which she toured Europe. Formerly a member of the art staff of The Pittsburgh Press, she is now an artist for Newspaper Enterprise Association, handling fashion drawings and such features as "Flapper Fanny," used daily in The Press and other newspapers. Dr. Robbin is a graduate of Johns Hopkins University.


At some point she switched to the Associated Press. One of her fashion drawings was printed in the Evening Leader (Corning, NY) on July 3, 1946. She produced How Christmas Began for the AP. Sylvia was featured in an AP series of do-it-yourself projects. The December 20, 1953 Lewiston Morning Tribune (Idaho) showed how she used tiles to decorate a table top. The March 22, 1959 News and Tribune (Jefferson City, Missouri) featured her drawing of a table and various stools made of driftwood and stone. (Newspaper Archive download)

Sylvia passed away in January 1989 according to the Social Security Index.