'Vignettes Is Family Favorite
The Spokesman-Review (Spokane, Washington) 11/22/1953
One of America's favorite comic features for the last 30 years has been "Vignettes of Life," a gently satirical cartoon treatment of human foibles and social mannerisms. No less today than at the time of its inception, this feature appeals to many readers because of the deftness of its characterizations. Readers can usually identify familiar personalities from among the cartoon characters—the man next door, the girl at the office, the youngster who lives in the corner house down the block.
"Vignettes" is created each week by Harry Weinert in the Inland Empire magazine of The Spokesman-Review on Sundays. Weinert was born in Royersford, Pa., in 1901, and developed an interest in art while attending Royersford public schools. His art training was furthered through studies at Corcoran School of Art, Washington, D.C.
After joining the art staff of the Philadelphia Public Ledger, Weinert continued his studies at the Pennsylvania School of Industrial Art, and later continued his studies abroad.
As a free lance artist he contributed to such publications as the Saturday Evening Post, Esquire and the Philadelphia Inquirer.
His spare time art work is devoted chiefly to the study of early American arts and crafts, particularly Pennsylvania Dutch. Aside from the art field, his hobbies are travel and when possible, chugging around Great Egg Harbor bay, New York, in an outboard motorboat, crabbing and fishing. 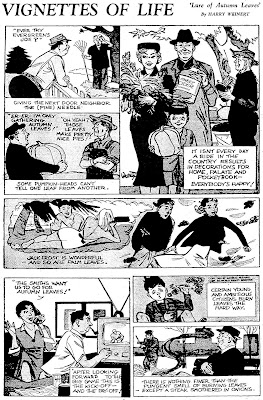 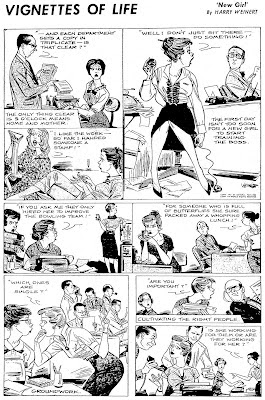 Seattle Daily Times, 4/9/1961
[Harry S. Weinert was born in Royersford, Pennsylvania on September 2, 1901; his birthdate is from the Social Security Death Index. In the 1910 U.S. Federal Census, he was the only child of John and Nellie. They lived in Royersford at 252 Washington Street. His father was a glass blower. The magazine, St. Nicholas, July 1917, published a list of young adult contributors to the St. Nicholas League. The "Roll of Honor" list included Weinert, for his drawing.
The Weinerts remained at the same address in the 1920 census. Weinert was a newspaper artist. A New York passenger list, at Ancestry.com, recorded his return from Europe. Aboard the S.S. Republic, he sailed from Bremen, Germany and arrived in New York City October 16, 1928. His address was 619 North 17 Street in Philadelphia.
He has not been found in the 1930 census. According to the Philadelphia, Pennsylvania, Marriage Index, at Ancestry.com, he married Regina M. Scally in 1936.
Philadelphia Inquirer Gold Seal Novels has an annotated list of illustrators, including Weinert, who contributed from the 1930s to the 1950s. The Philadelphia Directory 1950 had his address as "702 S Wash Sq". In 1952, he took over Vignettes of Life when Kemp Starrett passed away.
Weinert passed away in December 1968, according to the Social Security Death Index. His last residence was in Philadelphia.]