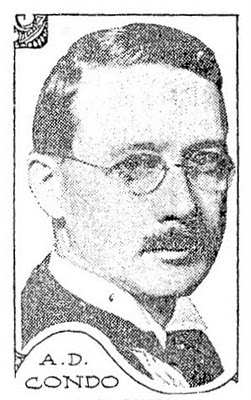 A.D. Condo, the man who draws Everett True for The States, was born some forty odd years ago near Toledo, Ohio. Long before Ardo was out of his teens, his father, a preacher, was killed in cyclone and the boy had to turn in and help make a living for the family.
One of young Condo's earliest jobs was as a printer. Later he became an engraver. His natural drawing ability took him from the engraving department to the art staff of theToledeo News-Bee. Here he drew cartoons and covered regular assignments from fires to picnics. More than ten years ago he left Toledo and went to work for theCleveland Press.
Condo's caricatures attracted much attention. Next, the Newspaper Enterprise Association secured his services. Today as a member of NEA's art staff, Condo is drawingEverett True for more than 250 of America's leading newspapers.
Psychologists say each man's hero is his exact opposite. Everett is fat. Condo isn't skinny but used to be.
Everett's "let's go" whenever he is displeased, landing with fists or his umbrella. Condo is long suffering and never had a fight in his life. He is big-hearted and loves children.
Something after this fashion, Condo does his work: He walks around the block until he finds a human pest and he sicks Everett one that particular pest—on paper of course. For example:
"An acquaintance told me people pestered him into buying a Liberty bond," recounted Condo. "So he bought the smallest one he could get—$50. He's rich. It made me so mad I wanted to kick him."
Condo didn't dare to do that so he had Everett administer the punishment.
And that's the way Everett True first broke into print. Condo came to the office one morning after a neighbor's rasping phonograph had annoyed him unusually the evening before—kept him awake, in fact, long after he had retired.
Why wasn't there someone to put a machine like that out of business, or to teach the owner of the machine a practical lesson, thought Condo. And before the day was over Everett was born—and the never-ending procession of pests has kept him busy ever since.
Condo's home is in Berkeley, California. He is a widower and lives with his mother and his little daughter.
[Armundo Dreisbach Condo was born in Freeport, Illinois on September 19, 1872. The Montana Daily Independent, November 18, 1923, reported his birth location. His World War I draft card had his birthdate. Dreisbach was his mother's maiden name. In the 1880 U.S. Federal Census, Condo lived with his maternal grandparents in Thompson, Ohio. The grandparents operated the Orphan Institute. His mother, Esther, and younger brother, Early, lived in Carthage, Missouri. His missionary father, Eli, was killed by a cyclone in Marshfield, Missouri, on April 18, 1880, according to Historical Data and Life Sketches of the Deceased Ministers of the Indiana Conference of the Evangelical Association, 1835 to 1915 (1915).
In the 1900 census, he lived with his mother and brother in Toledo, Ohio at 430 Raymer Street. Both brothers were newspaper artists. According to Don Markstein's Toonopedia, "A Chapter from the Career of Everett True, as the series was originally titled (it was quickly shortened to The Outbursts of Everett True), was created by A.D. Condo and J.W. Raper. It first appeared on July 22, 1905." Everett True panels can be viewed at Chronicling America. In 1908 he drew the panel, Mr. Skygack, from Mars. 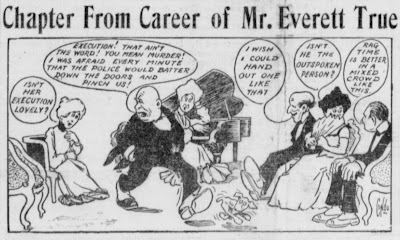 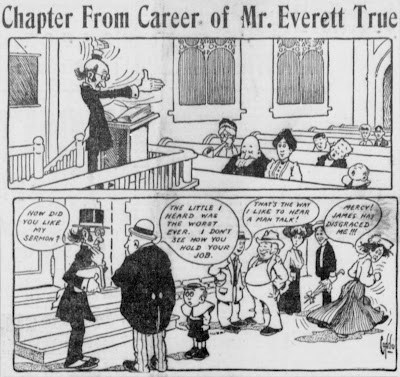 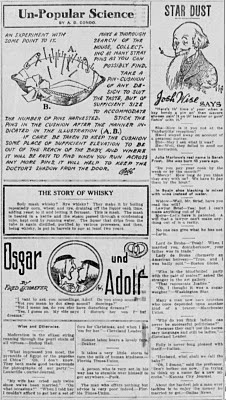 Seattle Star, 3/18/1910
Condo, a widower, was recorded in Cleveland, Ohio at 10819 Tacoma Avenue, according to the 1910 census. He was the head of the household of four which included his three-year-old daughter. He was a newspaper cartoonist and his brother was a printer. He drew the comic strip Osgar and Adolf from 1911 to 1915. Condo wrote about his first newspaper assignment in Pep, January 1917. He signed his World War I draft card on September 12, 1918. He was an NEA newspaper cartoonist who lived at 964 Tulare in Albany, California. His description was medium height, slender build, with gray eyes and brown hair.
In the 1920 census he, his daughter and mother were at the same address as the one on his draft card. He worked for NEA as an illustrator. Ten years later, Condo and his mother remained at the same place. He continued as a cartoonist. According to the California Death Index at Ancestry.com, Condo's mother passed away March 20, 1947, and he on August 24, 1956, in Albany, California.
Condo's characters Everett True, Osgar and Adolf appeared in Alley Oop from the last week of March to the third week of April 1969.