Charles Dean Cornwell was born in Louisville, Kentucky on March 5, 1892. His birth information was recorded on his World War I and II draft cards, both found at Ancestry.com. Charles was his first name as recorded in the 1900 U.S. Federal Census. He was the oldest of two children born to Charles and Margaret. They lived in Louisville at 2418 Portland Avenue. His father was a civil engineer. According to the National Cyclopaedia of American Biography (1967), his father's full name was Charles Louis and his mother was Margaret Wyckliffe Dean; her maiden name was Cornwell's middle name.

His earliest published work (above), in a national periodical, may have been in St. Nicholas, May 1907. He submitted a drawing to a St. Nicholas League contest announced in the January issue. In the May issue it said: "Drawing. Gold badges, Charles D. Cornwell (age 15), 3418 High Ave., Louisville, Ky…. "Who's Who in Kentucky (1936) said he attended the DuPont Manual Training High School.
The Field Guide to Wild American Pulp Artists said, "He had a natural talent for drawing, and in high school his cartoons appeared in the school newspaper and year books. After he graduated in 1910 at the age of eighteen he worked as a cartoonist for The Louisville Herald." In the 1910 census, Cornwell's mother was the head of the household. They lived in Louisville at 1500 First Street. His name was recorded as "Charles Dean" and he was a musician. The Seattle Daily Times (Washington), November 8, 1926, published Burton Rascoe's column, "The Daybook of a New Yorker", who wrote:


…At the office until 5:30 and dropped by the studio of Dean Cornwell, the American artist and illustrator, whom the great Brangwyn has named in his will to carry out the work he leaves unfinished, ignoring British royal academicians and more famous, but I dare say, not better artists than this tall, slim youth, who used to play the trap drums in a motion picture theatre two-piece orchestra for a living. He has his drum and traps in the studio and he turned on a phonograph record and I drummed to the piece while he was putting a few touches on a canvas; but when he had finished he took the sticks and made me look like a ham, so accomplished and dexterous a drummer is he.
We went to the station together and read the evening papers in the train until we reached Mamoraneck [sic], where our wives in separate cars awaited us...

The National Cyclopaedia said he attended the Art Institute of Chicago from 1909 to 1910 then "he began his career in 1911 as a charcoal-pencil artist with The Chicago Tribune". Some of his Tribune art can be viewed at ChicagoMag.com. He also contributed the Stone Age Stuff and Freddy Frappe panels to the Tribune's Crazy Quilt Sunday comic page, which is viewable at Barnacle Press. Stone Age Stuff ran from April 12, 1914 to January 10, 1915, and Freddy Frappe ran from May 31, 1914 to January 10, 1915. 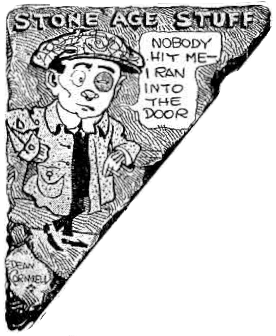 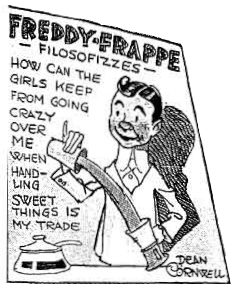 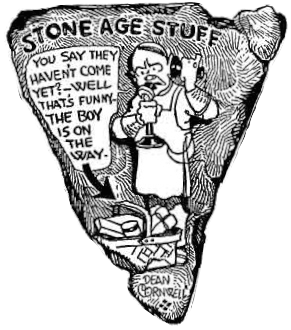 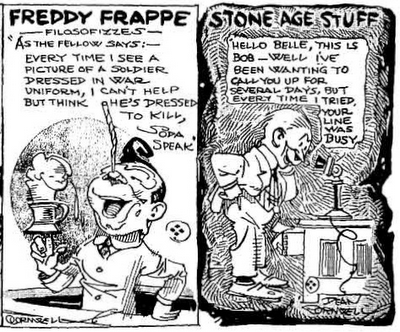 1/10/1915
In at least three different magazines, he used his full name. At this time the earliest one is Canada Monthly, November 1914. Next is The Green Book Magazine, January 1915. The FictionMags Index named The Red Book Magazine, February 1915. Other 1915 issues of Green Book Magazine with his art include March, April and May; in the last two issues his first name was dropped from the signature. National Museum of American Illustration said "Dean attended the Art Students League in New York in 1915".
He applied for a passport on November 29, 1916, to visit Cuba, Panama, and Costa Rica. Aboard the S.S. Calamares, he sailed on December 6 and returned on January 1, 1917. He lived in Leonia, New Jersey. On June 5, 1917, he signed his World War I draft card. He lived in Leonia at 105 Leonia Avenue. His occupation was illustrator for the Saturday Evening Post. His description was tall, slender with brown eyes and hair. The Cook County, Illinois, Marriages Index, 1871-1920, at Ancestry.com, said he married Mildred Montrose Kirkham September 3, 1918.
In the 1920 census, he remained in Leonia but at 201 Leonia Avenue. He and Mildred were artists with their own studio. His father passed away December 9, 1920. The Breckenridge News (Cloverport, Kentucky), December 15, 1920, reported the father's death.

C.L. Cornwell Aphasia Victim
Formerly Lived in Glen Dean and Father of Dean Cornwell Famous Artist.
Mr. C.L. Cornwell, who formerly lived in Glen Dean and was the engineer in charge of the construction of the Fordsville Branch line of the L.H. & St. L., died in the City Hospital of Louisville on Thursday. His death was due to injuries when he was hit by a Fourth Street car on the evening previous to his death.
Mr. Cornwell, while constructing the branch road, was married to Miss Margaret Dean, daughter of the late Johnson Dean, and a sister of Miss Amanda Dean and Mr. Charlie Dean, of Glen Dean, one of the most prominent families of Breckenridge county.
They have two children, a son, Dean Cornwell, of New York, one of the country's leading artists, who illustrates stories and who draws covers for the largest magazines. Their daughter, Miss Mary Cornwell, is also a very talented artist and magazine illustrator.
Mr. Cornwell suffered mental afflictions which unfitted him for work. He had been separated from his family for some time but they looked after him. Mr. Cornwell built the Breckenridge-Street and Kentucky-Street viaducts over the L. & N.R.R. tracks. He did a great deal of work for the Santa Fe railroad in Oklahoma and Texas, and was a specialist in the use of designing of pneumatic caissons.
His remains were buried in Louisville. His widow, son and daughter survive.

Spaghetti—My Style.
By Dean Cornwell, Illustrator
You know how to cook the spaghetti itself, I'm sure, so I will try to tell you how to make the sauce that I concocted some years ago and you'll like it.
Get a big iron kettle and put into it a lot of fine beef cut into small squares, some chopped bacon, dried mushrooms, (the kinds you get at any little Italian store), a can of tomatoes and some sliced onions. The dried mushrooms shoal be soaked for an hour or two before cooking.
Cover the material with plenty of water and season with salt, brown sugar, and Mexican chili powder. Cook slowly all day—the longer the better, I find.
When you are simply famished and cannot wait any longer, ladle the sauce onto the steaming hot spaghetti and enjoy a real meal. The sauce is still better, in my opinion, when warmed up the second day. 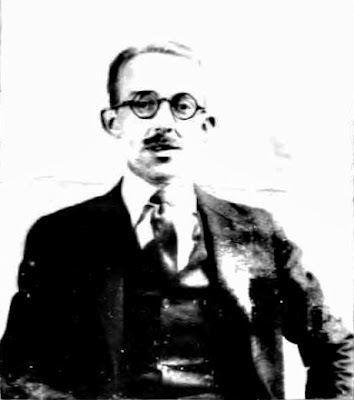 Passport photo, 1922
Cornwell visited Europe many times. On November 16, 1923, he returned from Cherbourg, France. His address was 58 West 57th Street in New York City. He and his wife planned to visit England, France and Italy beginning in late November 1924. On the passport application he gave his permanent address as Mamaroneck, New York. There were European trips in 1927 and 1928.

Family passport photos, 1924
The Trenton Times-Advertiser (New Jersey), April 27, 1924, listed a May 2 radio appearance by Cornwell, on WEAF, at 4:35 pm, about "The Mystery of Illustrating for Magazines". On January 17, 1929, he was a radio guest, whose appearance was promoted in the Rockford Republic (Illinois) article, "Dean Cornwell to Broadcast During Serenade".

Dean Cornwell, American artist, illustrator, world traveler, who has lately returned to New York after four years painting aboard, will be guest speaker for the Lehn & Fink serenade to be broadcast nationally over the NBC system, blue net, on Thursday evening at 7 o'clock….He will tell wherein the American girl, often less classically beautiful that her European sister, nevertheless decidedly outranks them in knowing how to assemble her good points and succeed in being more charming.
Mr. Cornwell arrived in New York with a crate of immense mural canvasses which he had sketched out in London because he could find no New York studio big enough to hold them. One of the first things he did was to look up a typical American girl model, for he has just begun work on one of the most important art consignments of the day, the mural decorations for the new memorial library in Los Angeles. Miss Murel Finley, Ziegfeld beauty of New York and California, was the artist's choice.
Picks California Girl.
Having painted women the world over, from the blonde beauties of the north countries to the dark-eyed and alluring sirens of the tropics, for his story illustrations which appear regularly in American magazines, this artist has achieved considerable reputation as a beauty critic. Asked what qualifications decided his choice of a California girl to pose for the figure of American girlhood in his forthcoming murals, he said:
"Of course, the first requirement was form and profile, human proportions that have been considered the ideal of feminine beauty throughout the ages. But for this piece of work, for a representation of ideal American womanhood, I needed more than this—radiant health, the beauty of a clear skin and firm muscles, and that well-groomed fitness which characterizes American women and makes them superior to other women of the world over."

He was recorded in the 1930 census in Manhattan, New York City at 1105 Park Avenue. He had a son and a daughter, and was an artist for an international magazine. In May 1930 he sailed to Europe again. American Art Annual Volume 30 (1933) gave his studio address as, "Gainsborough Studios, 222 Central Park South, New York". He visited Cuba in April 1933 and Bermuda in July 1938.
The New York Times, February 7, 1942, said, "Dean Cornwell, artist and head of the New York City Art Commission, took a large suite in 863 Park Avenue…" He signed his World War II draft card on April 27, 1942. Self-employed, his studio was at 222 Central Park South in New York City. His description was 6 feet and 165 pounds with brown eyes and blonde hair. His mother passed away March 9, 1947. The Niagara Falls Gazette (New York), July 23, 1948, reported the death of his sister.

Dean Cornwell's Sister Is Found Dead in Bed
Sun Valley, Idaho, July 23 (AP)—Mary Randolph Cornwell, 54, of 55 Park avenue, New York City, was found dead yesterday in her room at this resort.
Dr. Robert Wright, Blaine county coroner, said she had probably been reading in bed, gone to sleep and died of a heart attack.
Survivors include a brother, Dean Cornwell, noted artist, and a niece, Patricia Cornwell, an editor of Harper's Bazaar.


He returned from Europe in December 1955; his address was 33 West 67 Street in New York City. Cornwell passed away December 4, 1960, at Roosevelt Hospital in New York City. The December 6, New York Times obituary said the cause was a heart ailment. His wife passed away October 19, 1974.
An overview of his work is at Illustrators. The Century Association Archives Foundation has a photo of Cornwell and a stamp with his artwork. The book Dean Cornwell: Dean of Illustrators is available from various sources.