Jesse Harrison Mason was born in Baltimore, Maryland on December 7, 1891, according to his World War I and II draft cards at Ancestry.com. In the 1900 U.S. Federal Census, he was the oldest of two sons born to William and Gertrude. They lived in Baltimore at 1610 East Lanvale Street. His father was a butter merchant.
Ten years later, the family lived on the same street but at different number, 1705. Mason was an engraver at the Maryland Lithograph Company. His marriage was recorded in an issue of the Maryland Genealogical Society Bulletin, Volume 14, 1973: "Virginia Baker Heard & Jesse Harrison Mason, April 20, 1912". On June 5, 1917, he signed his World War I draft card. He lived in Baltimore at 1406 Ashland Avenue and had one child. His occupation was advertising artist at the Baltimore News. His description was medium height and build with blue eyes and light-colored hair.
In the 1920 census, Mason lived with his wife, daughter and mother at 4 Holly in Baltimore. He was an artist at an engraving company. According to the Baltimore Sun, January 17, 1969, he founded, in 1924, the Mason Company, an advertising firm. Printers' Ink, Volume 147, Issue 2, 1929, reported his success:

An issue of Printed Salesmanship, from Volume 53, 1929, said of Mason: "…self-taught insofar as he has not had much formal instruction in art, but a keen sense of perception plus a native skill in technique, which he is constantly developing..."
On July 15, 1929, Mason married Thora Bistrup in Baltimore, according to the Chronicle-Telegram (Elyria, Ohio), July 26. It is not known what happened to his first wife.
The 1930 census recorded Mason and his family in Linthicum Heights, Maryland on Maple Road. He was an advertising artist. In the mid-1930s, he and William D. Tipton (1892–1945) collaborated on the panel, Flight, and strip, Air-Minded Junior. 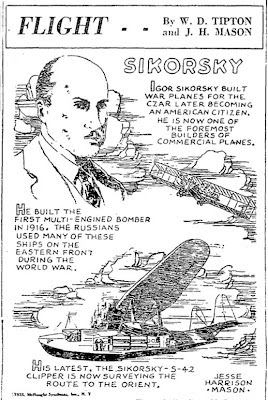 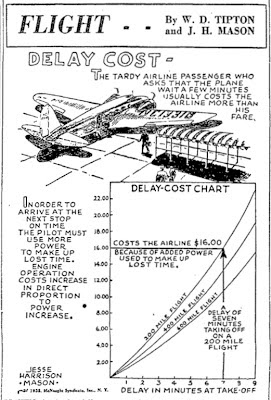 We've had so many compliments on American Aviation's masthead and stationery that we might as well break down and confess that it's all the doings of Jesse Harrison Mason, that dynamo of dynamic hurricanes from Baltimore. Jess not only contributes regularly to the National Aeronautic Association's magazine, but he has become overnight the latest sensation in the world of aviation art and designing. His St. Louis air race posters are undoubtedly the classiest conception of all time for air race posters. We think he did a grand job for us. Someday an airline is going to be begging Jess to do some designing for it, and then we'll begin to see some effective advertising.

Mason signed his World War II draft card April 27, 1942. He lived in Linthicum Heights at 4 Sycamore Road, where he was self-employed. He was described as 5 feet 10.5 inches, 165 pounds, with blue eyes and blonde hair.
Mason passed away January 14, 1969, in Baltimore. His death was reported in the Sun on January 17. He was buried at Loudon Park National Cemetery in Baltimore.