Lester Joseph Ambrose was born in Gardenville, New York on January 16, 1879, according to Who Was Who in American Art (1985). His birthdate was recorded on his World War I and II draft cards. Most book and web sources name Gardendale as his birthplace, but I have found no such city or village in New York. According to the 1880 U.S. Federal Census, he lived in Gardenville, which is just a few miles east of Buffalo. He was the oldest of three children born to Joseph and Mary. His father was a hotel keeper.

Who Was Who said he studied at the Art Students League branch in Buffalo. Later he attended the Chase School of Art in New York City, where his instructors were William Chase and Robert Henri. Ambrose served in Cuba during the Spanish-American War, according to the New York Times, December 2, 1949. The Illustrated Buffalo Express, April 23, 1899, noted his return: "Lester J. Ambrose is welcomed back into the club again. He has been wintering in Cuba with the boys of the [illegible]."
In 1900, he lived with his parents in West Seneca, located between Buffalo and Gardenville. His occupation was "Bar Garden[er]." His father passed away this decade. A short list of his magazine illustrations is here. Who Was Who said he contributed illustrations to The American, Pearson's, The Delineator, and Woman's Home Companion.
He lived with his mother and sister in Buffalo at 212 Normal Avenue, according to the 1910 census. He was an artist with his own studio. The Illustrated Buffalo Express reviewed Old Good-by's and Howdy-Do's, a book of verse by John D. Wells, and said, "The book is well made. It is illustrated by several drawings by Lester J. Ambrose, of which are in unusual sympathy with the text." For the Chicago Tribune, he contributed the strip Simp Simpson, which ran from February 1 to June 7, 1914. [practically without a doubt he was employed in the Tribune's bullpen in this period -- Allan] The Illustrated Buffalo Express, December 24, 1916, published his "The Story of Creation". The Rochester Democrat Chronicle, February 24, 1918, noted his participation in the upcoming Central Y.M.C.A. show on March 1: "…Lester J. Ambrose, cartoonist for the Post-Express, will give a chalk talk…" He signed his World War I draft card on September 12, 1918. He lived in Rochester, New York at 40 Tibbs. He was superintendent at the Post-Express. Who Was Who said he was a cartoonist for the Post-Express. He named his mother as his nearest relative; she lived at 73 Hughes Avenue in Buffalo. His description was medium height, slender build with gray eyes and brown hair. 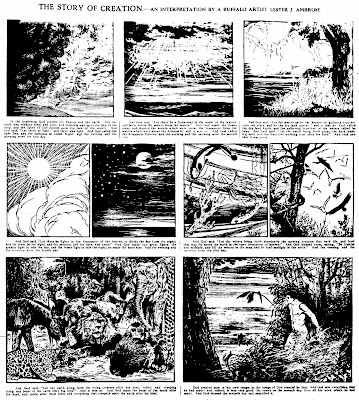 In the 1920 census his mother was the head of the household. They lived in Buffalo at 18 Merrimac Street. He was an artist. Who Was Who said he studied painting with Lucius Hitchcock, Kenneth Hayes Miller, and Louis Mora, but it's not clear when that was.
It's not known when he moved to Illinois, where the 1930 census recorded him in Oak Park at 905 South Clinton Avenue. He was married to Lila, whom he married when he was 43. His occupation was photo-engraver in photography. Lester was named in the the New York Times, November 17, 1935, article "Art Exhibit Stirs Storm in Chicago".
Charges of 'Indecency' Marks Attacks on Exhibit and Amaze Eastern Jury.
Art has driven politics over the ropes of the conversational ring in Chicago. The forty-sixth annual exhibit of American paintings and sculpture at the Art Institute has made itself the one topic upon which everybody must have an opinion. The exhibit broke into the newspapers in a manner which astounded the jury of three Eastern artists who selected the paintings as a cross-section of contemporary American Art.
…The allegation of obscenity is based less on nudity than upon a suggestiveness which some observers say they discover in facial expressions, contours and attitudes. "Dime a Dance," by Lester J. Ambrose, in which Al Capone is said to be a figure amid a group of coryphees; "Romance," by Thomas Hart Benton, in which a Negro walks hand in hand with his girl friend beneath a Southern moon, and "Lovers on a Stoop," by Mary E. Fife, are among those works of art which some have deplored.

On April 27, 1942 he signed his World War II draft card. He and Lila lived in New York City at 101 West 3rd Street. He was not working. His description was five feet eleven inches, 155 pounds, with gray eyes and hair. The New York Times, November 12, 1943, cited his painting in the fifth annual exhibition of the American Veterans Society of Artists.

The show makes an attractive ensemble and contains canvases that are outstanding. Among these quite the finest, in my estimation, is Lester J. Ambrose's tenderly and subtly brushed tiny "Gold Star Mother."