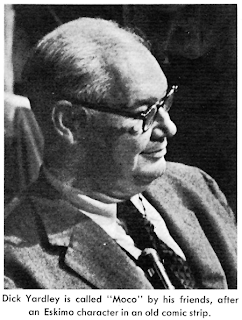 There are two cartoonists in America who cannot be copied. One of these is Chas. Addams, intimate of ghouls, gourmets, poltergeists, calcars, spoorns, octopi, devils, demons, morticians, witches, werewolves, weirdos, and all the forces of evil. The other is Dick Yardley of Baltimore's Morning Sun, whose perhaps even more sinister playfellows are the world's captains and kings. Of course any fairly competent lifter could handily appropriate their styles. A truly skilled copyist might begin to get some of the other stuff. But if perfect copies were possible, they would have to carry the signatures too—so indelibly is the mark of exclusive possession stamped on their work.
The most remarkable thing about Yardley (avaunt, Addams!) is that he is an editorial cartoonist at all. In a field bound by tradition and usage, limited in subject matter, regenerating on its own cliches, he has operated almost as if all the rest didn't exist.
His style, which might be described as early Ming, middle comic strip, late Picasso, and all Yardley—or perhaps better some other way-is not suitable for editorial cartoons. To begin with, it's not serious. We all know how you've got to be mighty serious about lots of things-atom bombs, for instance. You couldn't put over something big and profound by drawing a couple of nudeniks with four heads, a little banjo-eyed character in a beret and maybe a cat, all caught up in some sort of symbolical astral soup and expect to scare daylights out of your readers. Well, no, you couldn't—but Yardley can. 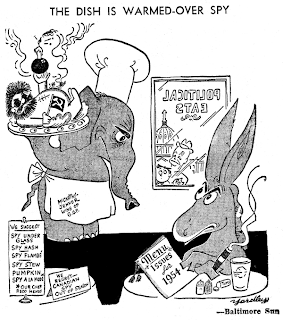 And when you think of it, hasn't he made his point in the most logical and familiar way? Aren't we all familiar with nightmares, subconscious thoughts, subliminal images? Don't we all have a horror of crawly and shapeless things, of mutations and monstrosities? Aren't we awed by the stars and galaxies? Isn't there a spooky ancient memory of signs and symbols, runes and cryptograms? And isn't comedy always there in our minds too, flickering like so much heat lightning?
Yardley's world is tremendously animate and in this quality too, it accurately reflects the state of the planet. Like something seen in a microscope, there are unexpected and beautiful mosaics, mysterious shapes and zillions of things whirling about in every direction. Oddly enough, the figures that suggest this motion are not in violent action. There are no flow lines and no straining for movement. Yet everything in the picture—houses, trees, water, animals, people—has a vitality of its own. The girls are corn fed and lovely, nubile and nifty. Villains are mean, ambitions are raw, politicos are crafty, embarrassments are keen. There is nothing static, nothing detached. Everything is involved with everything else as if in some over-sized, many-triangled love affair. Often as not, hovering over all this, may be a very special Cupid with wings sprouting from the glutei maximi rather than the shoulder locations favored by Fra Angelico, Rembrandt, Rubens and other knowing masters. 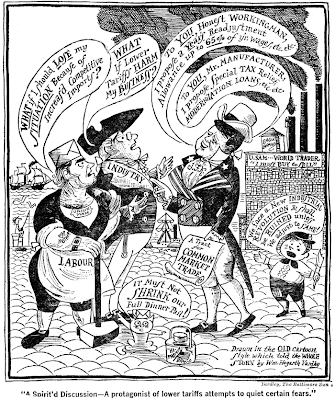 In fact, it is safe, I think, to say that love, more than anything else, make Yardley’s pictures go round and round. There is love of the work that shows in every line. And there is love of life, and humanity, and of things as they ought to be, that comes across, no matter what else he may be saying.
The experts on cartooning, who rise up every so often and tell us how bad we are, and what, on the other hand, great cartoons should be, are in agreement on several points. Foremost is the notion that all cartoons should be something like Goya's war etchings. Another is that they should be biting caricature in the manner of Daumier. All agree they should be simple, direct, forceful, uncluttered, understandable at a glance, the pen lines jagged, the ink acid, and never, never, never, should they be full of little labels, signs and explanations.
Yardley's great cartoons are great in spite of all this. He will probably never get any splendid prize or citation for conformity. If his work is Goyaesque in any way—it's 'La Maja Denuda' Goyaesque. (Some of his figures wear less than Adam). And it's hard to tell about his caricatures. Some are true, most are flattering, and others may be spitting images too, but not necessarily of the people depicted. His manner is often indirect, terribly cluttered, and even the Greek choruses (beret and cat) seem to have Greek choruses of their own. His lines are not jagged but flow as smoothly as Maryland rye, and as for labels— they are not only numerous but at times in foreign languages. You couldn't possibly understand one of these cartoons at a glance, but that's the point—you have to stay a while and look and think and enjoy. 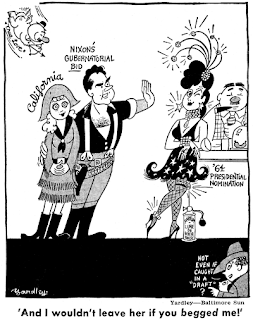 I am not artist enough to know how much art goes into his work. These pictures may be thought out in almost mathematical precision, or, more likely, they come out spontaneously. Certainly the designs are intricate and inventive. Certainly there are complicated and sophisticated constructions.
Before becoming an editorial cartoonist, Yardley did a back page panel largely about the pleasures of Baltimore, that had no equal anywhere. We didn’t have the bomb then and he could give a lot of attention to crab cakes and high prices and a curmudgeon of a boss and the bounties of Chesapeake and the activities of a very lovely little girl who happened to be his daughter. His drawing, always beautiful, foliated into elaborate maps, nostalgic wood-cut effects and simulations of old engravings. They still do now and then – weight of the world or no – and an added nifty on rare occasions may be an old photo or painting retouched into some hilarious caricature of itself. As clever as things are, you never think of them being clever because there is no self-consciousness or striving for effect. They are the right thing at the right time and just what you can expect one day or another from Yardley. 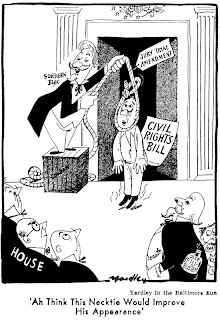 Since he has no peers it is hard to evaluate him in relation to other cartoonists or even in relation to the profession. He probably never broke up a Tweed ring or cleaned up a rat alley. He has probably never ruined any public figure through merciless caricature. He doesn’t, as a rule, lend his talents to furthering the routine good causes, and if he has a hobby of collecting medals or doing woodwork, he doesn’t mention it anywhere. On the other hand, though, he can hit very hard while not seeming to do so. His likes and hates are intense and constant and there is never any doubt which side he is on. His touch is often light and always whimsical, but as with all the greatest satirists, his concern is with the largest things. About the state of the world and the state of man, Dick Yardley probably has more to say than any of us.