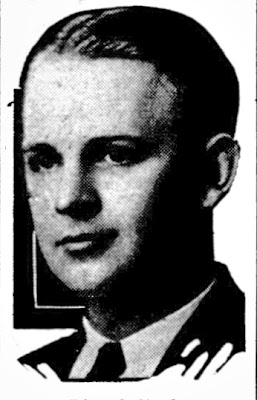 Edgar Everett "Abe" Martin was born in Indianapolis, Indiana on July 6, 1898, according to Ernest Lynn's article in the Advocate (Baton Rogue, Louisiana), September 3, 1960. His World War I draft card has the same birth date. In the 1900 U.S. Federal Census, he was the youngest of three sons born to George and Mary. They lived in Crawfordsville, Indiana at 308 South Green Street. His father was a teacher. The date of their move to Tennessee is not known


In the 1910 census, the family lived in Civil District 7, in Davidson County, Tennessee, on Hillsboro Road. His father was a professor at Vanderbilt University. On September 12, 1918, he signed his World War I draft card. He lived in Jacksonville, Tennessee. His occupation was foreman at the Dupont Engraving Company. His description was medium height and weight, with blue eyes and blonde-brown hair. Martin named his father as his nearest relative, who lived at 403 North 9th Street in Monmouth, Illinois.

The 1920 census recorded the Martin family in Monmouth at 813 East Broadway. His father was a college professor. The Advocate said: "As a freshman Martin used to draw grasshoppers, lizards and frogs in his father's biology classes. He quit in his junior year to enter the Academy of Fine Arts in Chicago. He joined Newspaper Enterprise Assn. in 1921." In 1922 he created Efficiency Ed. Later that year he drew The Nut Brothers. An Ancestry.com family tree said he married Mary Margery Armsby in 1922.

Editor & Publisher, February 26, 1949, said: "Martin landed with NEA in 1921 when he was 23. He drew several comics without much success until 1924 when NEA asked several artists to submit strips for a girl comic. Martin in off hours created Boots [and Her Buddies], submitted the idea, unsigned, and the board of judges picked her." Boots and Her Buddies began on February 18.


In 1930 Martin lived in East Cleveland, Ohio at 1868 Chapman. Two daughters were part of the family. His occupation was newspaper cartoonist. He signed a long-term contract with the NEA in 1930. The Independent (St. Petersburg, Florida), March 15, 1934, reported the Martin family's vacation in Florida. 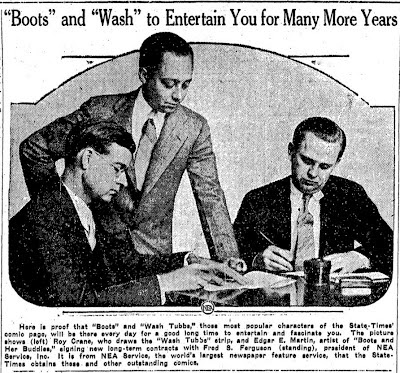 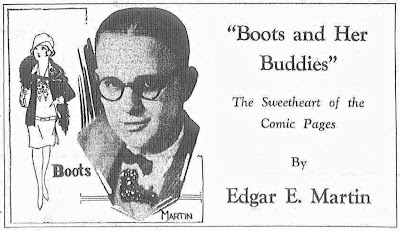 
Wikipedia said he moved to Clearwater, Florida in 1940. According to the 1945 Florida State Census, his family lived in Pinellas County at 1500 Maple. His education included college and his occupation was artist. The Independent, February 18, 1949, published a profile of Martin on the 25th anniversary of Boots.

Martin passed away August 30, 1960 in Clearwater, according to various newspapers including the New York Times, September 1, and the Advocate. Wikipedia and Comic Strip Artists in American Newspapers, 1945-1980 (2003) said the date was August 31. Comic Strip Artists said the Sunday Boots was turned over to Leo Carroll, Martin's assistant.

Comments:
Just a note -- The 2/22 was evidently published with the last two panels before the first.

Since this (and other) strips were designed in two neat halves to stack if desired, I'm guessing this sort of thing happened in a lot of composing rooms.