Fung the Only Chinese-American
Cartoonist in Captivity 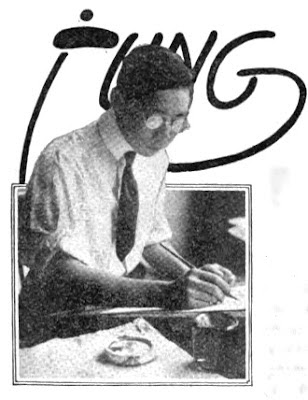 Paul Fung, the young Chinese-American cartoonist, of the Seattle Post-Intelligencer, is prized highly by his paper as the only one of his species in captivity. Young Mr. Fung has thus far succeeded in taking his honors with a degree of modesty which promises well for his future. With the tireless industry peculiar to the Chinese he has coupled an enterprise and a sense of humor truly American, and the combination has enabled him to put over a remarkbly [sic] high percentage of good work on his first newspaper job.

Paul Fung was born in Seattle 18 years ago. When he was five years old his parents returned to their former home in China, taking Paul with them.

An older sister, who lives in America, sent the boy copies of the American comic supplements and he became ambitious to take up newspaper work in the land where he was born. From copying the Katzenjammer Kids and Happy Hooligan, Fung took the next and almost inevitable step of seeking instruction in drawing.

His first teacher was a Chinese artist and he followed the Chinese method of instruction. Fung was taught to copy conventionalized flowers and leaves and birds out of a book of prints, working with camel's-hair brush on a pad of soft paper with Chinese ink as his medium.

During his six years in China young Fung passed through what corresponds to a high-school course. At the end of that time with his father and his brother he returned to Portland, Ore., where he finished an American grammar-grade education.

In Seattle, Fung entered the high school and speedily became the chief contributor to one of the high-school magazines published in that city. Ambitious still to work on a regular newspaper, Fung spent his spare time visiting the art rooms, listening to the advice of the men experienced in the business, and always trying to find his own opportunity.

A large vaudeville theater wanted an artist to make up cartoons of the current acts for use as lobby displays cards, and Fung got the job. He held it so successfully that his work attracted attention from the newspapers, and he figured as the hero of several special articles.

Eventually Fung got his chance, as most boys do who want to join a newspaper art staff badly enough. He went to work for the Post-Intelligencer as a comic artist, and is now making good as a cartoonist. 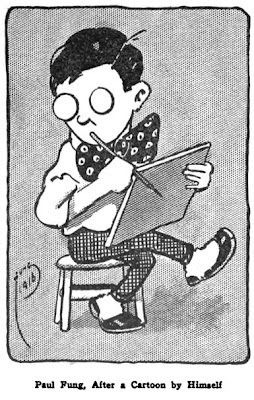 [If circumstances had been different, Ying "John" Zane may have preceded Paul Fung as the first Chinese American to become a nationally syndicated cartoonist. Cartoons Magazine, September 1915, published a short profile of him and a sample strip (pages 478–9).

Years later his name appeared in The New York Times, October 11, 1924 when a fire erupted on a steamship.


…When the first [fire] engines arrived flames were shooting through the superstructure and about 200 coolies of the crew, asleep below, had been confused by smoke and were shouting for help. Watchmen, firemen and policemen helped them off after they had been quieted by John Zane, a Chinese cartoonist on the China Press of Shanghai, who is working his way around the world as a member of the crew. A few Chinese jumped into the water and were fished out. They gathered with the rest on the pier, which also was aflame for a time, and cheered Zane for having saved them from panic and its consequences….

What happened to him after this event is unknown.]

Comments:
I've got two "Bughouse Fables" panel cartoons from 1930, clipped from the SF Call-Bulletin and credited to King Features Sydicate. Perhaps he was a KFS staffer?

Oh, sorry, I should have added that both are signed by Fung.