by Alexander Samalman
The Fourth Estate, 1925


China has produced a myriad philosophers, poets and water color artists, but only one American newspaper cartoonist.

The only representative of the ancient nation in the realms of comic art is Paul Fung, who illustrates Jack Lait's Gus and Gussie for King Features Syndicate. 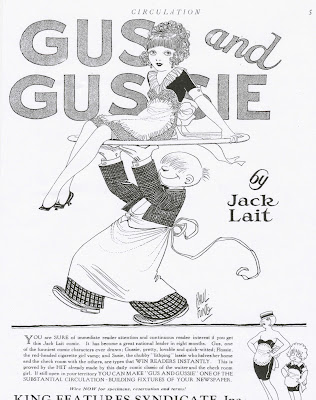 
Paul Fung was born in Seattle, the son of a Doctor of Divinity who presided over a Chinese Baptist Church. All of which goes to show that "Cartoonville" is the proper place for a Chinese minister's son.


When he was 5 he went to Canton, China, where he studied for 6 years, working for some time with a man who painted water colors on fans. An elder sister who lived in Seattle accumulated piles of American comic sheets and sent them to him from time to time. In his Oriental surroundings he devoured them greedily and dreamed dreams of becoming an American newspaper artist.

He returned to the United States. His family at that time lived at Portland, Ore., and there he got his start in the newspaper business as a carrier boy for the Portland News.

He studied at American High Schools and then at the University of Washington, taking an art course. Meanwhile he drew posters for a theatrical enterprise. Later he become a full-fledged newspaper cartoonist on the Seattle Post-Intelligencer, doing sport, political and feature pictures.

He attained local fame as a cartoonist and also as an entertainer, for he appeared for some time in a chalk-talk monologue at vaudeville theaters.

Several of his war cartoons, in especial one entitled "The Sweetheart of the Allies," which pictured a Salvation Army lassie, spread his fame throughout the nation.

Billy De Beck, creator of Barney Google, met Fung while on one of his western trips, and persuaded the young Chinese artist to come east. Soon Fung signed up with King Features Syndicate in New York and began The [sic] Guy From Grand Rapids, dealing with the adventures of a lonesome man alone in Gotham. This ran for a year, then Fung began his work as the illustrator of Gus and Gussie, which is written by Jack Lait.

At the age of 28, Fung is an eminently successful newspaper artist, known throughout America as a careful, capable craftsman.

"I draw because I enjoy it," says Fung. "I always liked to draw more than I liked anything else. I have two brothers who are also interested in art. Silas is studing [sic] at the Chicago Academy of Fine Arts and Timothy is doing well as a commercial artist.

"I must express my gratitude to Billy De Beck, whose encouragement and friendship have meant a lot to me."

"I am a pure Chinese, but please discredit any rumors that I'm identified with a tong!"

And Paul laughed at his little jest while he bent froward [sic] over his drawing board to draw the curls on the head of his character, Gussie.