(The Chinese Exclusion Act, passed in 1882, restricted the entry of Chinese into the United States. Its purpose was to keep out Chinese laborers. The act was renewed in 1892 and eventually made permanent. For the Chinese Americans already in America, they had to notify immigration whenever they traveled to a foreign country or territory, such as Hawaii. The travel documents of the Chinese were made in triplicate and shared with other immigration offices. For example, a Chinese resident of Chicago would have a file there. If he traveled to China through Seattle, then a file would be opened in there. 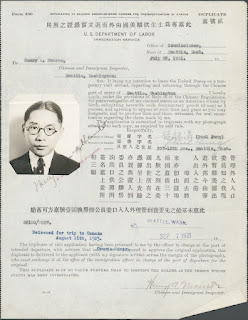 Back in 1921, Paul Fung filled out Form 430, above, for the U.S. Department of Labor Immigration Service. When he decided to make a brief trip to Vancouver in August 1923, he submitted the form, and it was approved: "Reissued for trip to Canada August 16, 1923. Commissioner". There was a mix-up in Vancouver that was eventually resolved. While Fung waited at the hotel, he wrote a thank you letter to Mr. Weedin. This letter, below, was stamped "Received August 20 1923 U.S. Immigration Service Seattle", and placed in his file. All of the documents are from Fung's file at the Seattle branch of the National Archives and Records Administration.) 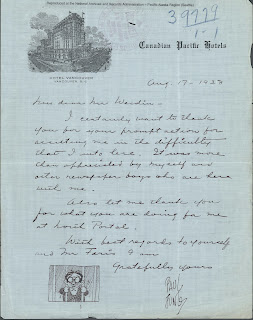