A Short Biography of Rick Fletcher
by his son, Ross Fletcher

[Stripper's Guide thanks Mr. Fletcher for allowing us permission to print this essay,
which is copyright (c) 2012 Ross Fletcher. All rights reserved]

Rick Fletcher was born in Burlington, Iowa on June 1 1916 to William and Maude Fletcher. He was the second of four children: Russell, Richard, Martha and Edward. Rick had a keen interest in drawing from an early age. Encouraged by his mother, he drew every day and studied art and anatomy books from the local library, teaching him perspective, composition, color and technique. In his diary, he wrote that when asked how he learned his art skills, “I say that I go to art school at the library.” 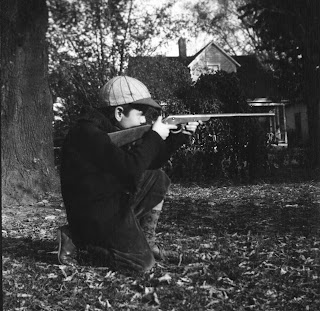 After graduating from Burlington High School with the class of 1934, Rick and his family moved to Galesburg, Illinois. There his father worked for the Chicago, Burlington & Quincy Railroad as a fireman on the steamers, and later as an engineer on the stainless steel Burlington Zephyr. His mother was a happy homemaker who loved to raise her family and cook wonderful meals, including Eggplant Parmesan, Rick’s favorite.


Rick’s career growth in 1935 was quite remarkable. During March, the 18-year old Rick and his younger sister Martha started a business. Rick would design and draw paper dolls and Martha would sell them at school to her friends. A diary entry recorded his take, “Made twenty six cents.”


Rick also entered the Knox Laundry Anagram contest, winning three tickets to the Orpheum Theater. The following week he used his little brother Ed’s name and won first place again. The third week he entered with a neighbor girl’s name and won yet again. Another quote from his diary said; “The president of Knox Laundry asked the girl’s sister if Rick Fletcher didn’t do the drawing. My reputation is getting out.”


On May 2 1935 Rick won a twenty-two dollar Mixmaster food mixer in the Doyle’s Furniture Store contest; this further boosted his confidence. He gave the food mixer to his mother.


On September 26 1935 Rick wrote to a longtime friend, Joe Weber, who was working as a photographer at the new Tri City Star newspaper in Davenport, Iowa. He asked about the possibility of a job in the art department. Weber brought Rick to the attention of Mr. Hinkle, the publisher, who liked Rick’s work and hired him for fifteen dollars a week starting October 3 1935. Rick soon moved to Davenport to become a one-man art department. Within a week he complained in his diary, “work is coming in too fast to get any quality” but decided “composition is what puts the drawing over.” Rick went to the Davenport Library for more art instruction material.


Rick worked at the Tri City Star for two years, then found a more desirable position at the Rudy A. Moritz Advertising Agency in Davenport. Rick was hired as the art director, producing ads and campaigns for national accounts. This position allowed him more time to produce higher quality work.


Rick’s final entry in his 1935 diary summed up the enthusiasm he held for his career. “This has certainly been some swell year, all because of my artwork. My first big cash in was the Mixmaster food mixer that I won and gave my mother, and then the big achievement which was the job at Tri City Star. My greatest help has been from Joe Weber and Mr. Hinkle, the Publisher of the Star and the Beacon Publishing Company…I can consider 1935 as a year I was launched in my career, which I hope will reap me rich rewards and fame in the future, it really was an eventful year.”


In 1942, Rick’s career was interrupted by World War II. He went to Camp Dodge in Iowa on September 29th1942, then on to Officer Candidate School at Fort Belvoir in Virginia. He was commissioned in the Corps of Engineers in April 1943 and assigned as a First Lieutenant S-1 Adjutant to the 308th Engineer Combat Battalion with the 83rd infantry Division. 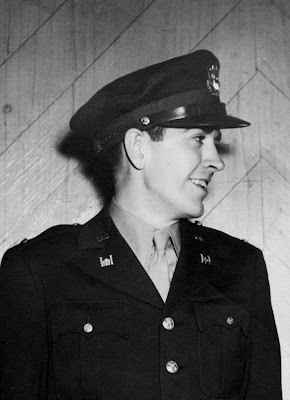 Rick went through five European military campaigns from D-Day +10 at Omaha Beach, the Battle of Normandy through the hedgerows zigzagging across France, into Belgium, Holland and fought in the Battle of the Bulge. He raced through the German Wehrmacht into Germany along with the 83rd Infantry Division when General Eisenhower ordered the Army to stop. He was in Zerbst Germany near the Elbe River just eighty-eight miles from the bunker where Hitler was hiding in Berlin. Two weeks later Hitler committed suicide in the bunker when the Russian Army invaded from the eastern front. Rick received the Bronze Star for his service in the war in Europe.


At the end of the war until his trip back to the United States, Rick was assigned various positions; commanding officer of the Sonndorf Prisoner of War Camp in Germany; purchasing and contracting officers to build camps for Displaced Persons and Prisoners of War; and trial judge advocate. Aside from his regular duties in the U.S. Army, Rick hand-lettered signs and painted vehicles. He also passed the time by drawing caricatures of himself, expressing his moods in his letters home.


Rick’s desire to draw became increasingly problematic as many supplies were scarce while overseas. Rick frequently instead relied on his 35mm Leica camera to produce quick, convenient photographs. Throughout Europe he took photos of citizens, soldiers and landscapes, eventually making a scrapbook. He later made a watercolor painting of Belgian peasants based on a photo he took from his jeep.


He was separated from service as a Captain on February 27 1946. His name is inscribed in the Book of Honor at the Court of Patriots - Rock Island Arsenal Museum, located on the same property as the National Cemetery in Rock Island Illinois where he is buried along with his wife Beverly.


After the war Rick was offered jobs at two locations, the Chicago Tribune and a local engraving studio. In a diary entry Rick decided to choose the Tribune because “I just liked walking down Michigan Avenue and going into the Tribune Tower, which has quite a mystique in Chicago.” Rick joined the advertising art department in April 1946, handling illustrations and cartooning. Rick studied for several years under the supervision of Carey Orr, Pulitzer Prize winning chief editorial cartoonist; learning advanced comic strip technique. Orr taught many illustrators, including, back in 1917, then high school student Walt Disney.

Tribune colleagues took notice of Rick’s art, which showed quality and versatility. While he worked in the advertising department, Rick continued to pursue opportunities in illustration by submitting original samples of his own work to editors at the Chicago Tribune. The Old Glory Story was Rick’s first strip, a color Sunday feature, starting in February 1953. Written and researched by Athena Robbins, this award-winning story began as an illustrated history of the American flag. The feature was so well received that Robbins and Fletcher were asked to continue it after the initial story was completed, exploring other aspects of American history. The unique aspect of The Old Glory Story was that all the stories, flags, people, uniforms, weapons and transportation were illustrated with historical accuracy and reproduced in full color. The feature ended up running over thirteen years, finally ending in April 1966. The stories told in the strip are as follows:

Meanwhile, in 1961, while working on Old Glory at the Crossroads, an opportunity was presented by Chester Gould, the creator of Dick Tracy and Rick’s colleague at the Chicago Tribune. Gould’s young assistant, Dick Locher, had to leave for family reasons, and Gould hired Rick as a part time assistant artist, His duties for Gould included penciling panels, illustrating and inking backgrounds, advertising layout and illustration, as well as developing story-lines. 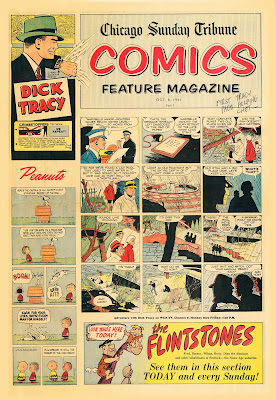 During the spring of 1962 Gould hired Rick on a full time basis to be part of the Dick Tracy production team, which at the time included Chester Gould’s brother, Ray, for lettering; Jack Ryan, production art, and Chicago Police Detective Al Valenis for police-related research.


Rick concurrently worked on The Old Glory Story and Dick Tracy from 1961 until the last Old Glory strip was completed in 1966. Rick performed as a member of Chester Gould’s production team for the Dick Tracy comic strip continuously for 16 years, 1961-1977, learning Gould’s unique drawing and story style that Rick called “Gouldism”. This long-term experience and an already award-winning illustration career led Chester Gould and Tribune executives to agree to have Rick Fletcher take over production of Dick Tracy when Gould retired on December 24 1977.


Working with a young new writer, Max Allan Collins, Rick began showing his strengths by equipping Tracy with state of the art equipment: a nickel plated Colt Trooper MKIII .357 magnum revolver with illuminated night-sights and the 2-way wrist TV (which Rick created with his younger brother Ed in 1963 while working with Gould).


Rick drew the Dick Tracy comic strip for five years, always researching the latest technologies, reflecting current trends in popular culture and listening to his fans. Rick also utilized proper law enforcement techniques and procedures learned from several of his friends in law enforcement. Among them were Julio Santiago of the Dakota County Minnesota Sheriff’s Office, friends working at the Federal Bureau of Investigation and his old friend Al Valenis from the Chicago Police Department. 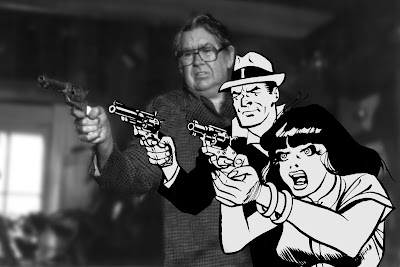 Contributing time and talent to his local community in Woodstock Illinois, Rick produced several illustrations for fundraising auctions, as well as personal cards for friends in the hospital. On several occasions Rick  acknowledged friends and family by using their name or likeness hidden somewhere in the background of the Dick Tracy panels, then present them the original art as a gift.


Teaming with the Chicago Tribune from early 1946 until cancer took his life on March 16, 1983; described by his colleagues as the “world’s greatest artist of guns, hardware and machinery in the history of comic strips,” and having hundreds of millions of readers around the globe agree, Rick proved his abilities to manage and produce exquisite, timeless American illustrations.

Postscript: Rick Fletcher is often confused with another man with a nearly identical name who cartooned for the Chicago Tribune in the same era -- Dick Fletcher. That other fellow produced the strips Surgeon Stone and Jed Cooper. In case there is any lingering doubt about there being two cartooning Fletchers at the Trib, here's proof in the form of a 1956 Joseph Parrish caricature of the two: