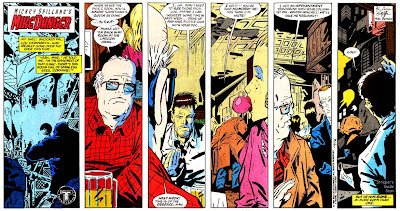 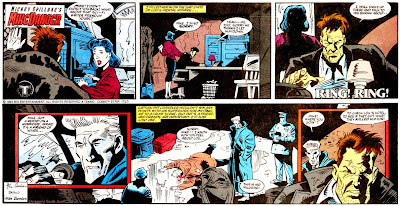 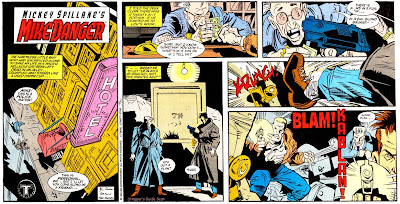 One of the favorite bits of trivia for comic strip wonks is that the famed author Mickey Spillane was once a member of the stripper fraternity. Back in 1953, as his fame for writing hard-boiled, sexy detective stories was at a plateau, he lent his detective character, Mike Hammer, to a comic strip that ran for just one year. The strip was reportedly co-written by Spillane, who was no stranger to comics scripting -- before he hit it big as a novelist, Spillane had been a comic book writer. The strip was, by nature, far too gritty for newspapers, and the few editors who did bite were probably relieved when it was cancelled.

However, this post is not about that strip. As obscure as the Mike Hammer strip is, I've got a yet more obscure one for you today. We have Mike Danger, which was Spillane's return to newspaper comics over forty years later. An outfit called Big Entertainment, which seems to have been a well-funded media company, decided to get into the comics business in 1994. Under the name Tekno-Comix, they gathered together a group of famous names to associate with comic book series. Besides Spillane, they got Leonard Nimoy, Anne McCaffrey, Neil Gaiman, Isaac Asimov and others to lend their monikers, if not necessarily their talents, to comic book series.


Spillane's series was titled Mike Danger, a name which had long ago been considered for an early comic book version of the detective who eventually became Mike Hammer. The new series, though, put a different spin on the hard-bitten detective genre. In this version, the grizzled detective starts out in a typical enough story, but after ten weeks of Sunday strips he gets locked into a cryo-chamber and wakes up in the year 2052. The 'fish out of water' motif was the brainchild of Max Allan Collins, who penned the series.

I asked Collins for his recollections about the strip. As to why the comic book series was preceded by a newspaper strip, he said "the purpose of it, I believe, was to have a comics property out there to show generally the direction the comic book company would go in." Collins also recalled that the series was not limited to the Asbury Park Press -- "my memory is that we were in a couple of papers, maybe three, at least at first.  But I can't guarantee it." As to Spillane's involvement, Collins said, "Mickey and I devised Mike Danger in a brainstorming session. Out of that session came the notion of using the Mike Danger character but in a s-f format.  I proposed time travel, and the politically incorrect Danger landing in a politically correct time.  It was a productive session.  After that Mickey's role was strictly to promote the comic book -- he did lots of TV and radio -- and I did all the writing."

The comic strip series featured work by different artists than the later comic book series. The newspaper strip sported excellent art, originally by Keith Giffen on pencils and Mike Barreiro on inks, then Giffen was replaced by Joe Station starting with the October 23 episode.

My run of the strip only goes through the end of 1994, but I'm reasonably sure that it did continue into 1995. Unfortunately I don't know how far into 1995, but my guess is that if this was strictly a marketing tool for the comic book, it probably would have wound up its run sometime around mid-year when the comic book series hit the stands (the first issue was dated September 1995).

Comments:
Do you have any more of these strips? I can't seem to find them anywhere.