(Identifying anyone who uses their first and middle name initials is a challenge. I found several references to the artist W.O. Wilson in books, periodicals and on the web, but not one had any hint to his first or middle names. I searched “W.O. Wilson” at Ancestry.com and found a candidate on a passenger list, which had his age, place and date of departure. With the year of birth and, possibly, place of birth, I had just enough information to narrow my search. The censuses gave me several candidates who had the same first, William, and last names, but it was the occupation of artist that pinpointed him. Other important documents were two naturalization applications with additional details. Also, knowing when he produced his newspaper comics convinced me that I had found him. With this circumstantial evidence, I present the following profile.)

William Oliver Wilson was born in Natal, South Africa on January 31, 1867, according to his United States of America Declaration of Intention application from the Department of Commerce and Labor Division of Naturalization Petition for Naturalization, which was filed on April 26, 1909; this document is at Ancestry.com. According to the declaration, he, a British citizen, arrived in New York City on February 4, 1890 from Durban, South Africa; his former residence was in Barberton, Transvaal, South Africa. His occupation was artist, age 42, who lived at 53 South Lena Air, Freeport, Nassau, New York. He stood five feet seven inches, 145 pounds, with brown and gray hair and gray eyes. The passenger list had his arrival in New York occurring on February 13, 1890, having sailed from Liverpool, England. His age was listed as 24 (birth year 1866) and occupation as builder. Presumably he received his art training in South Africa.

The United States of America Petition for Naturalization application, from the same federal department and division, was filed on December 8, 1911 and it said he “resided continuously in the United States of America for the term of five years at least, immediately preceding the date of this petition, to wit, since the 6 day of May anno Domini 1901, and in the State of New York, continuously next preceding the date of this petition, since the 6 of May, anno Domini 1901, being a residence within this State of at least one year next preceding the date of this petition.” He was an artist living on Chippewa Avenue in Hollis, Queens, New York City with his wife, Nellie, and three children, who were born in 1904, 1907 and 1911. His petition was witnessed by author George Folson, and artist Frank Crane. Wilson became a naturalized citizen on March 21, 1912.

The earliest mention of him, so far, is at R. Michael Wilson’s WildWestTales.com, who transcribed a number of articles from the San Francisco Chronicle. In his article “Illustrating America’s Newspapers in the 19th Century”, he said: “…The Chronicle, in early 1897, decided to host an art show and sale to support its charitable project. There was a [call] for donations of artwork and the Chronicle received sketches from newspaper staffs across the continent. In anticipation of the art show, scheduled for February 27, 1897, Chronicle writer John Bonner wrote an extensive article on the history of newspaper illustration from 1842 to 1897…His article appeared in the February 24 edition.” The transcription of the article, “The Chronicle’s Exhibition of Pictorial Art in Journalism”, had a list of the contributing artists including W.O. Wilson of the New York World. On February 27, J.H.E. Partington, of the Chronicle, wrote:

The Chronicle exhibit of original newspaper drawings this day opened to the public at 424 Pine street marks an era in the history of art in San Francisco and is likely to have a profound impression on the public and the artists of the city. One thing is quite clear that the artists or, to speak more accurately, the painter in oil and water colors, has got to accept the fact that his exclusive claim to the title of artist is now triumphantly disputed by a band of newspaper art workers, growing every day in power and popularity and quite capable of proving their right to the name.

It will not do any longer to deny that men who have such mastery of line, of drawing, of values, of composition and of dramatic power in telling a story as Keller or Jefferys of the New York Herald, as Trowbridge and W. O. Wilson of the New York World, as Miss Underwood of the New York Press, as Gruger of the Philadelphia Ledger, as Fiala of the Brooklyn Eagle and a score of others represented in this exhibition are infinitely ahead of the average painters of the country in artistic gifts and capacity…. 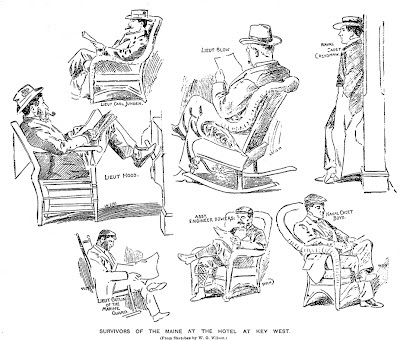 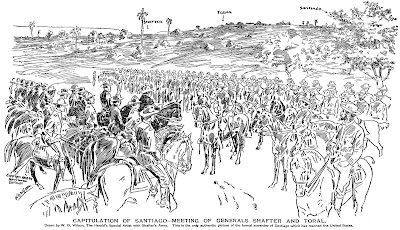 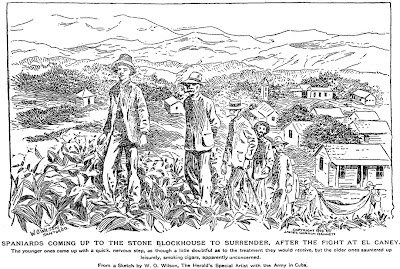 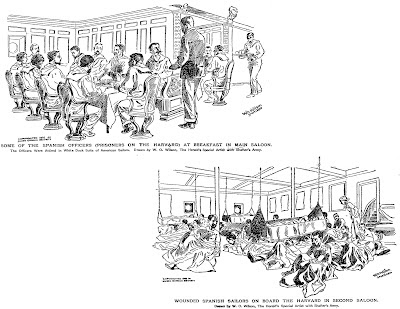 
In 1898, Wilson was sent by the New York Herald to the front lines of the Spanish-American War in the Caribbean, according to New York and the War with Spain: History of the Empire State Regiments (1903). After the war there was an inquiry, by the House of Representatives, into the conduct of Admiral Schley. During the conflict, Wilson was one of the newspapermen on a press boat which was in contact with Captain Sigsbee of the ship, St. Paul. Wilson was not called to testify. 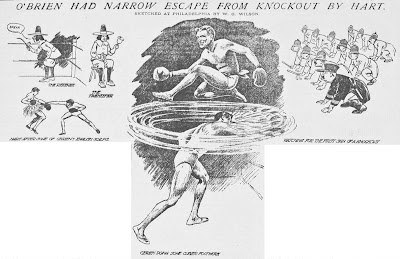 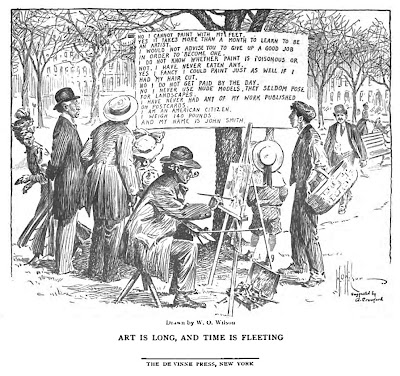 Apparently his newspaper work required him to travel for extended periods of time, so this may have been why he was not counted in the 1900 U.S. Federal Census. The naturalization documents place him in New York City beginning May 6, 1901. The birth of his first child, in February 1904, suggests he was married in Spring 1903, if not earlier. In this decade he produced the strips Horace the Hero, The Richleigh Family, The Wish Twins and Aladdin’s Lamp, and Madge the Magician’s Daughter, which ran in the San Francisco Call from September 2, 1906 to August 25, 1907. (At Hogan’s Alley, Tom Heintjes writes about Madge and includes 13 full-color pages.) A search of eBay found several issues of Harper’s Weekly and Harper’s Monthly, in this decade and the next, with his drawings.

The 1910 census recorded Wilson and his family in Freeport, Hempstead, Nassau, New York at 53 South Lena Avenue. He was married to Ellen, who was Irish, and had two children. His parents were born in England. He was a portrait artist. According to the 1915 New York State Census, he lived in Union Course, Queens, New York at 449 Lott Avenue. The household included a third child and his wife used the name Nellie. A World War I military record for him has not been found.

In the following federal census, he remained in Queens, New York but at 8409 105th Street, where he continued as an artist. The 1925 state census, recorded him on the move again, this time at 90-24 178 Street in Jamaica, Queens, New York. 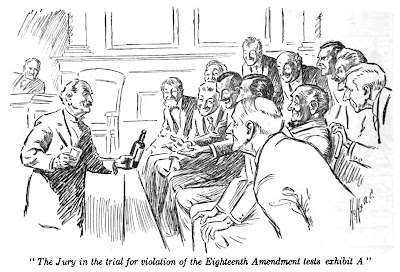 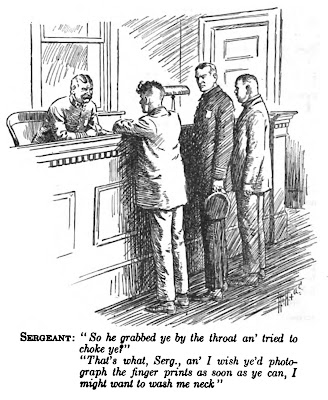 …Ebbitt A. Levitz, secretary of the guild, says that the feature of the show will be new and younger artists, who reside on Long Island, and have not as yet been able to show their work to the public. The oldest entrant is W.O. Wilson, 70, who will show a painting entitled “5th Ave. and 42nd St.” The composition was five years in the making….

In 1940, he, his wife and youngest child, William O. Wilson Jr., lived in Long Beach, New York at 161 West Hudson Street. Apparently, their son, a clerk, cared for them. A World War II draft card (the so-called “old man’s draft” in 1942) has not been found for Wilson Sr. According to draft documents, Wilson Jr. enlisted on February 24, 1941 and was single without dependents. Apparently Wilson and his wife were still self-sufficient or cared for by their other children.

Mr. Wilson had been with a number of Manhattan and Philadelphia newspapers prior to his retirement 25 years ago. He is survived by his wife, Mrs. Ellen Beirne Wilson; two sons, James P. and William O. Wilson, Jr.; a daughter, Helen M. Wilson, and three grandchildren. 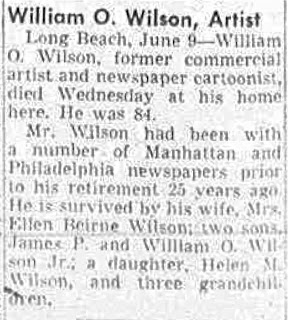 He was buried at the Cemetery of the Holy Rood, Westbury, New York.

Comments:
Are you going to mention or advertise the new book? I followed one of your European follower's advise and ordered it from the British Book Depository, who do a presell for a couple more days for 125 euros (including postage, or as they say: postage free).