Charles Chandler Reese was born in Pittsburgh, Pennsylvania in May 1862. Who Was Who in American Art 1564-1975 (1999) named his birthplace and birth year; the month was named in the census. In the 1870 U.S. Federal Census, he was the third of five children born to Abraham and Mary. His father was in the iron manufacturing business. The family lived in Pittsburgh.

In the 1880 census, the family resided in Denny’s Cottages in Pittsburgh. His father was from Wales and his mother from England. Reese, the third of six children, was an artist; specifics of his art training are not known. He was in the class of 1880 at the Pittsburgh Central High School. The Pittsburg Dispatch, February 9, 1889, said: “…Charles Reese, in the late Lotus, made good use of colored inks in his engravings…”

The little military dinner at the Monogabela on Monday must have been a help more enjoyable than such affairs usually are. The reason for this, I take it, was that there was nothing stiff or formal about it. When the 32 officers of the gallant Eighteenth were seated about the table, each man found on his plate a piece of hardtack on which the facile brush of Adjutant Charles Reese had limned a more or less humorous portrait of that particular guest. The hardtack gallery of beauties was designed to promote that fellow-feeling which makes men wondrous kind. It succeeded—every fellow felt for the next fellow who had been held up to good-humored laughter. Lots of sketches that get gold frames have not the merit of these little water-color crackers, and it is safe to say that bits of hardtack have never been hoarded as these will be….

The August 5, 1892 Dispatch reported the death of Reese’s paternal grandfather, William Reese, a pioneer in Pennsylvania’s iron mill industry; “…and among his grandchildren are Miss Reese, a bright newspaper writer, Charles Reese, an illustrator and cartoonist engaged in Pittsburg….” During the Spanish-American War, Reese contributed drawings to the New York World. 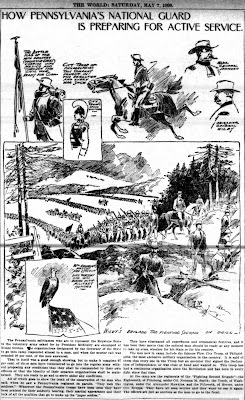 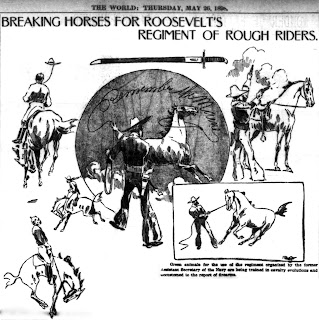 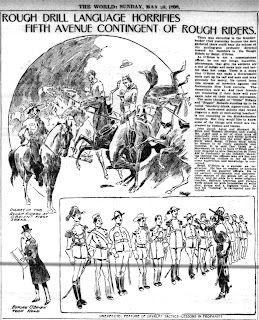 Reese lived in Hackensack, New Jersey, on Main Street, according to the 1900 census, which recorded his birth date as “May 1863”. He was married to Bertha. His two-time comic strip, Speaking of Ancestors, appeared in the Philadelphia North American in February 1904. He also contributed cartoon series to the Boston Herald and New York Tribune.

In 1910, he lived in Manhattan, New York City at 46 West 16 Street, where he was an artist and painter. The whereabouts of his wife was not recorded in the census. The New York Sun, August 2, 1913, said the Supreme Court decided Reese would not have to pay alimony to Bertha, whom he married in 1895, while his divorce suit was pending. She had been seeing another man.

According to the 1920 census, Reese had remarried and lived in Staten Island, Richmond County, New York at 21 Nugent Street. His wife and daughter were both named Eloise. He was an artist for a press company.

Los Angeles, California, at 1824 Las Flores, was his home in the 1930 census. He was an independent artist. Reese passed away July 3, 1936, in Glendale, California. News of his death was reported by the Associated Press whose story was published widely.

Glendale, Calif., July 4 - Charles Chandler Reese, newspaper illustrator and cartoonist, died yesterday at a hospital here. His age was 74. His career included work on New York, Pittsburgh and Philadelphia newspapers. During the Spanish-American War his sketches on the field of action in Cuba appeared in The New York World.

Mr. Reese claimed to have been the first artist to have a picture reproduced as a double-truck, or two-page, illustration in a newspaper.

Born in Pittsburgh, Mr. Reese lived in the East until he came here six years ago. He was prominent in the Elks and was Past Exalted Ruler of lodges at Hackensack, N.J., and Staten Island, N.Y.

Comments:
Hello,
I am doing research on Charles Reese's sister Cara Reese. I found a sketch I think was hers but may be Charles'. I was wondering if you had any more information on Charles and his pictures?

I came across a painting signed C. Reese. Wondering if it might be Charles or Cara Reese.

Are there any examples of their painted art to see?