George Evert Olesen was born in Brooklyn, New York on December 6, 1924, according to a 1927 passenger ship list and the U.S. World War II Army Enlistment Records, 1938-1946 at Ancestry.com. The passenger list had his full name and he was the youngest of two sons born to Ole and Elizabeth. They sailed from Oslo, Norway, and their U.S. address was in Bay Ridge, Brooklyn at 7515 Colonial Road.

In the 1930 U.S. Federal Census, the Olesen household size and address remained the same. His father, a typewriter mechanic, was born in Denmark, and his mother in Norway. Olesen graduated from Manual Training High School. He was the art editor of the Literary-Art Issues of the Prospect yearbook and drew the covers. 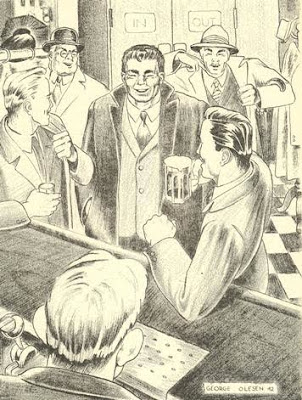 His address was the same in 1940. During World War II, he enlisted in the army on February 12,1943. Famous B-24/PB4Y Crew Members said Olesen was "a pilot of a B-24 flying 'The Hump' in the Far East during WWII, he supplied a much-appreciated daily cartoon for the Officers' Mess." After the war, he attended Pratt Institute and the American Art School where he studied illustration. Soon afterwards, he found work in the advertising and comic book industries, according to "A Ghost for a Ghost: George Olesen".

Using the pseudonym Ed Strops, Olesen and writer Bill Lignante produced Ozark Ike when Ray Gotto left the strip. "A Ghost for a Ghost" said Olesen did Red Ryder to its bitter end. His next strip would be The Phantom. Famous B-24/PB4Y Crew Members has a quote from Olesen:

Who’s Who of American Comic Books 1928–1999 has an overview of his work. The Grand Comics Database has a list of some of his comic book credits. Smurfswacker’s Words and Pictures has scans of two comic book Western stories by Olesen. Steven Brower Writings has a post, A Ghost for a Ghost: George Olesen, with details of Olesen's life, career and current whereabouts.

Comments:
I would have guessed this was early Steve Ditko, without your introduction. Look at those faces and those poses. Perhaps we have a big influence on Ditko here?