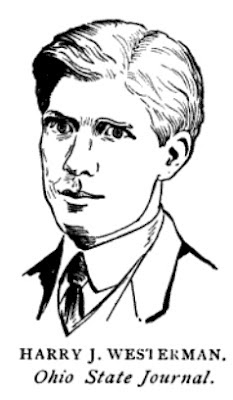 Artists in Ohio said “he was raised in Columbus and attended the Columbus Art School. He went to work at the Ohio State Journal in 1897 and became staff cartoonist four years later.” His illustration of a shootout was reprinted in Historic Columbus Crimes: Mama’s in the Furnace, the Thing and More (2010).

In the 1900 census, he was the second of three children born to Francis and Clara. His father was not counted in the census. The family lived in Columbus, Ohio at 923 Franklin Avenue. He was a newspaper artist. The Art of Caricature (1904) said

...Ohio boasts of four political cartoonists of prominence, and in a State where there is so much political activity and strife, and which contains so many statesmen, the reputation of a newspaper artist is important. J.H. Donohey, with the Cleveland Plain Dealer, W.L. Evans, with the Cleveland Leader, E.A. Bushnell, with the Cincinnati Post, and Harry J. Westerman [above], with the Ohio State Journal, are all first-class draughtsmen....

His cartoon of Theodore Roosevelt was reprinted in Rough Rider in the White House (2003). An issue of International Studio, 1904, reviewed Westerman’s A Book of Cartoons. A family tree at Ancestry.com said his father died May 18, 1906, in Pittsburgh, Pennsylvania. His Ohio State Journal illustrations for The Young Lady Across the Way were collected in a book and published in 1908; it can be viewed and downloaded here.

In 1910 he lived in Columbus, Ohio at 1661 Franklin Park South. The census said he and Maude were married for 13 years and had two children. His occupation was a newspaper cartoonist. The 1910 Ohio census recorded his first name as Henry. There is a self-portrait at the Columbus Metropolitan Library website.

The American Art Annual, Volume 10, 1913 listing said he was a member of the Columbus Pen and Brush Club. In 1914, he was the artist of George V. Hobart’s The Dinkelspiels, and George Ade's Newest Fables in Slang. 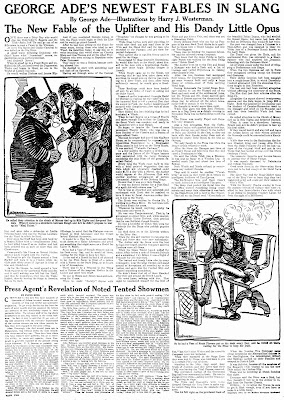 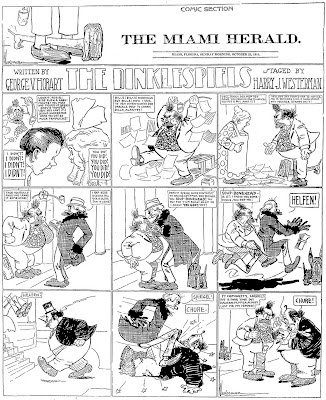 Harry J. Westerman, whose “Young Lady Across the Way,” “Dinkelspeil [sic],” and other cartoons are widely known, now takes his ease in a Hudson Six-40 phaeton. H.J. Schwartz, president and general manager of the Standard Motor Company of Columbus, Ohio, did the dotted line act.

During World War I he did drawings promoting thrift stamps, here and here. Cartoons Magazine, April 1916, published a photo and drawing of his dog. Artists in Ohio said, “By 1917 his work was being distributed nationally by the McClure and Adams syndicates.” His illustrations for “The Young Lady Across the Way” were published in Puck; early 1917 drawings are here. He signed his World War I draft card on September 12, 1918. He was a cartoonist for the Ohio State Journal. He was described as tall and slender with blue eyes and brown hair.

He remained a newspaper cartoonist at the same address in the 1920 census, which also recorded a third child. The Fourth Estate, July 8, 1922, reported the death of his wife.

Mrs. Harry J. Westerman, 47 years old, wife of the artist of the Columbus, Ohio, State Journal, was killed in a fall on the pavement near her home. She was carrying her infant grandchild at the time but the little one escaped injury. It is believed that Mrs. Westerman was overcome by the heat. Her skull was fractured.

Westerman and his oldest son’s family lived at the same address in 1930, Columbus, Ohio, 1661 Franklin Park South. He remarried, to Grace G. Doyle, in 1931 according to the New York Times, June 28, 1945. Three men, including Richard F. Outcault, “were added to a roll of honor fostered by the school of journalism at Ohio State university,” as reported in the Lima News (Ohio), November 5, 1933; “...Outcault, who drew a comic strip for the Cincinnati Enquirer and created Buster Brown, was extolled by Harry Westerman, artist for the Ohio State Journal.” Scorchy Smith and the Art of Noel Sickles (2008) said Sickles covered for Westerman.

…Bud [Sickles’ nickname] wandered back to Columbus and found himself once again working as a staff artist at one of the city’s newspapers, this time the highly-regarded Ohio State Journal. That paper’s political cartoonist, the prolific Harry James Westerman, had taken ill. After Billy Ireland pulled a few strings on Noel's behalf, responsibilities for the the Journal’s daily political cartoon fell into the hands of the 19-year-old from Chillicothe.

The Hamilton Daily News Journal (Ohio), July 5, 1935 said: “…Westerman retired today as cartoonist of the Ohio State Journal. He will continue in syndicate and portrait work.”

In the 1940 census, he was an artist at home, 4124 Riverside Drive in Perry, Ohio. His highest level of education was four years of high school. His wife was 24 years his junior and they had a six-year-old daughter. Westerman passed away June 27, 1945, in Harrisburg, Pennsylvania, on his way to New York City. The New York Times published the United Press report the following day. He “suffered a heart attack as the Jeffersonian, Pennsylvania Railroad express, reached the station here. He was pronounced dead by Dr. H.A. Larkin, railroad physician….Mrs. Westerman and their daughter, Sylvia, were with the cartoonist when he was stricken….” He was buried at Green Lawn Cemetery in Columbus, Ohio.