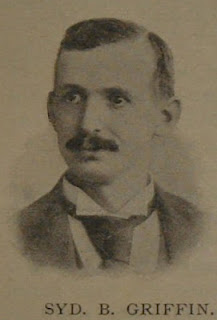 Sydney B. Griffin was born in Roxbury, Massachusetts on October 13, 1854, according to the Massachusetts Vital and Town Records at Ancestry.com. The book, Little Visits With Great Americans, or Success Ideals and How to Attain Them (1905), said he was born on the fifteenth.

In the 1860 U.S. Federal Census, he was the third of four children born to John, a cabinetmaker, and Ellen. They lived in Detroit, Michigan. Ten years later, the family remained in Detroit where he was an apprentice to a carver. His father emigrated from England and his mother from Nova Scotia. Griffin has not been found in the 1880 census. Little Visits With Great Americans said:

…in 1888, [he] came to New York. When his first ideas were presented to Puck they were declined, but upon his taking them to Judge they were accepted forthwith. Mr. Griffin took the trouble to inform the Puck people of his success with their rivals, whereupon he was told that his work had been refused for the simple reason that it was so excellent that it was feared that it was not original. However, Puck made the amende honorable by engaging him forthwith. Mr. Griffin’s style is bold and slashing and his drawings are full of point and power.

He also wrote for Puck; the following piece appeared in numerous newspapers including the Canton Repository (Oho), January 11, 1890:

How Johnny Lost the Prize.
His family and friends were there,
His uncles, cousins, aunts;
An all were sure that for the prize
Their Johnny had best chance.

’Twas Johnny’s turn to speak his piece;
He said, with outstretched hands:
“Under a spreading blacksmith tree
The village chestnut stands!”

Many of his cartoons, black-and-white and color, can be seen in the 1891 Puck volume. He also contributed cartoons to Truth magazine. At some point he moved to Mamaroneck, New York. The New York Sun, May 10, 1896, reported the new course of Mamaroneck’s Oakhurst Golf Club; Griffin shot a 124. The Statesman (Yonkers, New York), May 19, 1896, reported “the following officers of the new village of Mamaroneck were elected on Monday: …Sydney B. Griffin…Trustees.”

The 1900 census recorded the artist and his mother in Mamaroneck. He produced Four Comical Coons from August to December 1900. It was promoted in the December 7 edition of The World. The following year saw the publication of his Little Umjiji. The New York Sunday Telegram, September 22, 1901, reported the upcoming baseball game between actors and artists on October 7. Representing the artists were:

…Dick Outcault (The Yellow Kid) who is marshaling the pen-and-pencil crowd, has already had the limners together for a practice game and this week will have a game at the Polo Grounds. Jimmy Swinnerton, as short stop, and Homer Davenport as pitcher, Tom Powers, Dan McCarthy and Robert Edgren as basemen, and Bert Cobb as any old kind of a fielder, have already been decided upon.

…Miss Lillian Russell from the first accepted the position of official scorer, and the veteran Thomas Nast will be her associate in that delicate but important office….

The New York Dramatic Mirror, October 12, 1901, said the frosty weather kept the attendance low and official scorer Lillian Russell and the chorus girls away. After five innings the game was called; the score was 31 to 12 in favor of the actors. Homer Davenport did not pitch because he had left for Oregon to see his ailing father. Dan McCarthy starred for the artists.

Griffin was president and director of the New York School of Caricature, founded in 1901, which was located at The World Building. Instructors included J. Campbell Cory, vice-president, and Dalrymple, secretary. 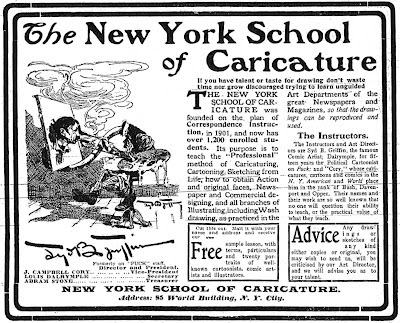 The World, June 6, 1903, promoted his comic feature, Love Affairs of the Office Boy. In the 1910 census, he lived with his wife and two children in Manhattan at 521 West 182nd Street. The artist had been married for five years. The 1915 New York State Census and 1920 census recorded him at 559 West 183 Street. He continued illustrating.

Griffin passed away around early June 1923, in Mamaroneck. His death was noted in the Daily Argus (Mount Vernon, New York), June 7, 1923.

Sydney B. Griffin, the last member of the first Mamaroneck village board, elected May 18, 1896, died at his home on Palmer avenue, Mamaroneck, after an illness lasting more than two years.

I am a freelance writer for the Detroit Athletic Club's magazine and I found your blog while conducting some preliminary research on an early DAC member -- cartoonist "Sid. B. Griffin" who also went as "Syd Griffin."

You seem to be just the person I need to interview for some historical context on a story I am working on. I would like to give you more information if you can reply to my e-mail that I sent you on January 14, 2015.