Here’s a Who: Horton*


Who was Barney, the artist of Adam Zapple (later as Jasper Jones) in the Movies? I haven’t found any information on him but I believe I know who was responsible for distributing the cartoon. His name is William Ralph Horton Jr., an artist and newspaperman. The 1880 U.S. Federal Census has his birth in December 1879 and the first child of William, an artist, and Mary; the census enumeration date was June 9, 1880. His World War I draft card said he was born December 10, 1880, which was the wrong year.

He hasn’t been found in the 1900 census but his parents had four more children. According to the Cuyahoga County, Ohio, Marriage Records at Ancestry.com, he married Matilda H. Bellone on June 17 1904. Horton’s Cleveland Plain Dealer obituary, published February 24, 1959, said:

Before joining the Detroit News in 1933 he worked for the Columbus Dispatch, the Cincinnati Enquirer, the New York Herald Tribune and the Curtis Publishing Co., Philadelphia….

The 1910 census recorded him in Cleveland at 10117 South Boulevard, where he lived with his wife, four-year-old daughter, Helen, and a servant. His occupation was newspaper artist. Ten years later the family, plus eight-year-old son, Ralph, remained at the same address. The Plain Dealer, February 15, 1920, reported Horton’s career move:

…Ralph Horton and T.C. Hoffmeyer, well known Plain Dealer men enter the “ex-P.D.” class to take a chance at the game of business.

The Department Reports of the State of Ohio, from October 16, 1919 to April 8, 1920, listed the new company: “The Horton Studios Co., Cleveland, $11,000. W.R. Horton, T.C. Hoffmeyer, R. Tomaso, M.B. Vilas, C.D. Simmons.” The Fourth Estate, February 21, 1920, reported that Horton and Hoffmeyer were partners in the Hoffmeyer-Rutledge Company, an advertising agency. Horton was knowledgable and experienced in the inter-relationships of advertising agencies, newspaper advertising and comics, and now he had an agency and studio to execute his business plan. The 1922 Cleveland Directory had a listing for Horton Studios Inc., with Horton as president and treasurer, and Vilas as secretary. The business was located at 2077 E 4th.

One of the studio’s newspaper features was Rolli-i-Rocs, a full-page children’s cut-out activity. It debuted in the Plain Dealer December 25, 1921. The Bookseller and Stationer, February 13, 1922, named seven of the several newspapers which carried Roll-i-Rocs: Pittsburg Gazette-Times, Springfield Union, Fort Worth Record, Atlanta Constitution, Hartford Courant, and Detroit Free Press. 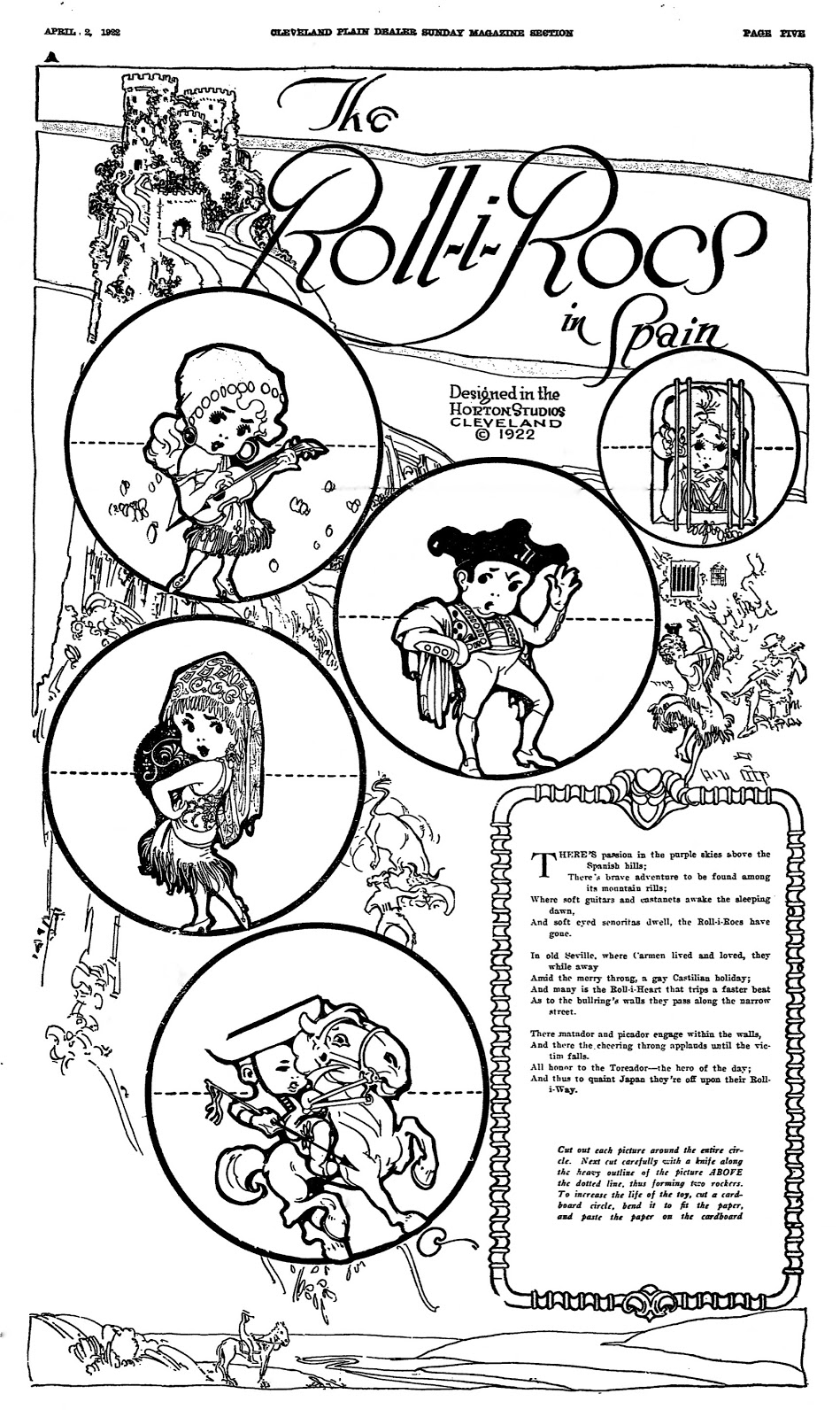 I believe Horton Studios (not Morton or Norton, as Allan guessed based on blurry bits of syndicate stamps) produced Adam Zapple in the Movies, which began, according to the earliest copyright date, around 1922. It was part of World Color Printing’s Fun in Black and White page. If you look closely at the bottom of the middle panel of Adam Zapple (below), the copyright line says “Horton Studios”; this line did not appear on every cartoon. My guess is that cartoonist Barney was a Cleveland resident. 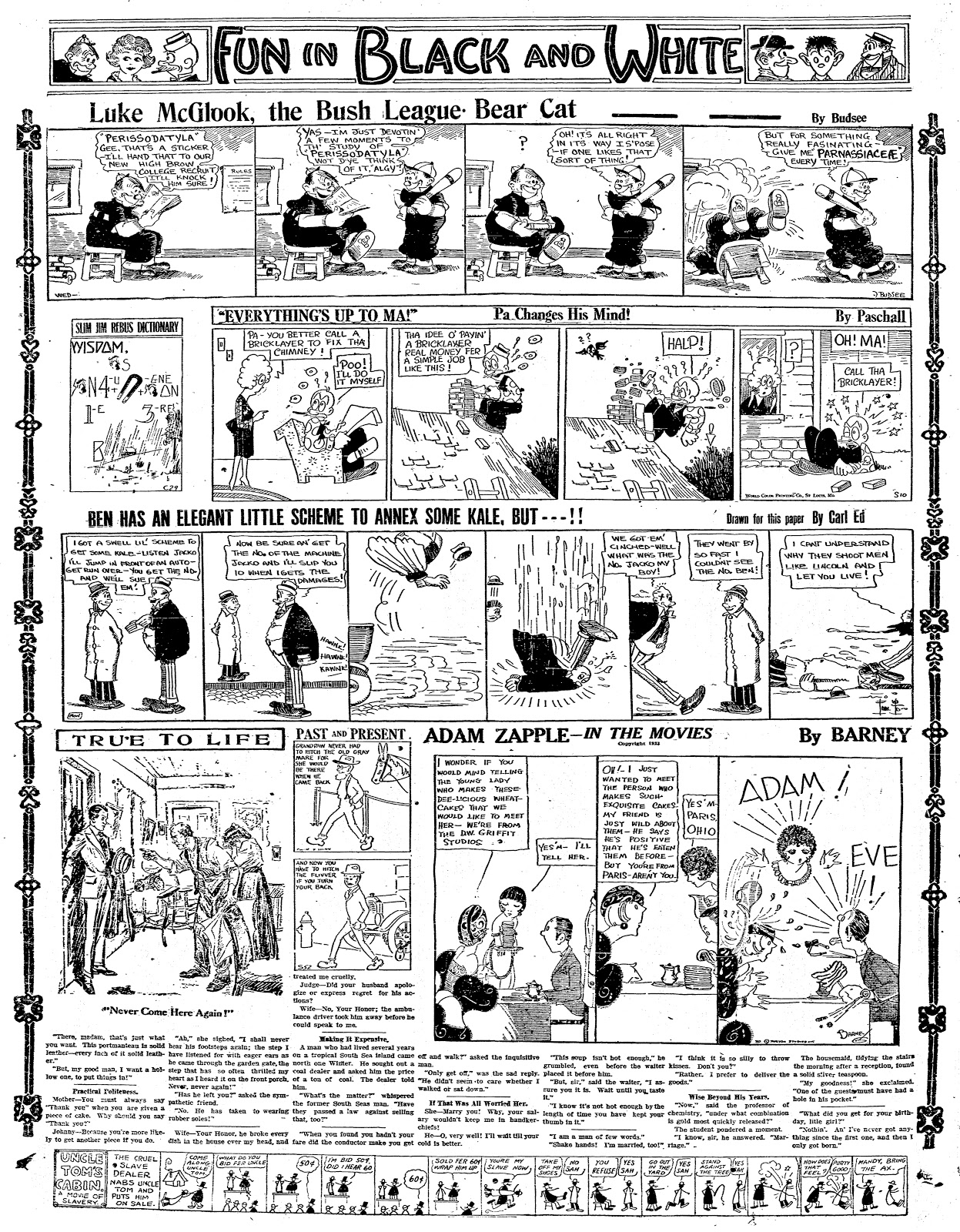 How World Color acquired the cartoon from Horton is not known. Some time later Adam Zapple became Jasper Jones, with a World Color Printing copyright; perhaps the copyright for Adam Zapple was contested, so the name was changed. The exact number of features and cartoons Horton Studios produced is not known at this time.

Horton has not been found in the 1940 census. At the time of his passing he was “survived by his wife, Gertrude; a daughter,…Helen…; a son, Ralph…; a brother, Frank; a sister, Mrs. John Albrecht, and four grandchildren.”


*My apologies to Dr. Seuss.