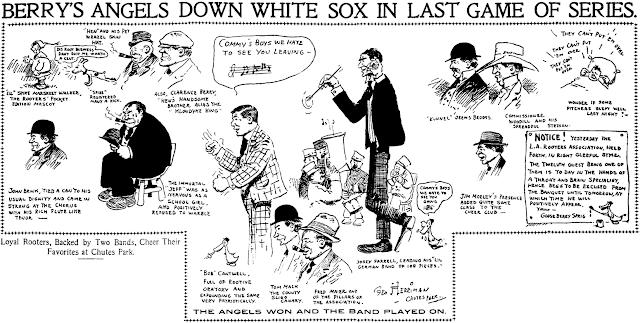 Monday, March 23 1908 -- It's time for the Chicago White Sox, who have been doing their spring training in and around L.A., to head on back to the Windy City. In the final exhibition game between the Sox and the local PCL-league team, the Angels finally emerge triumphant. And better yet for the hometown crowd, it doesn't sound like Chicago laid down to take a ceremonial licking, either. It was a hard fought game on both sides.

Even more memorable than the game itself may have been the two competing bands put together by the baseball rooters. The brass bands, one favoring the Sox, the other the hometown Angels, regaled the crowds with incredibly loud playing and leading cheer after cheer. In the sixth inning, to show the crowd that no one was really taking sides, the bands swapped allegiances, and kept the music and cheering going at sonic boom levels for the rest of the afternoon.