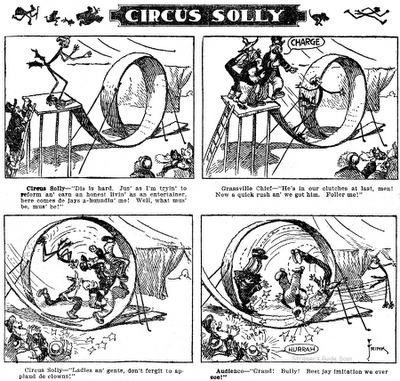 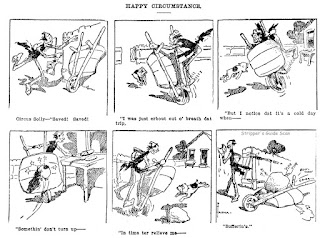 George O. Frink was born in Indiana in June 1874, according to the 1900 U.S. Federal Census. He was the youngest of two sons born to Erastus and Lotta (Charlotte) as recorded in the 1880 census. The family lived in Indianapolis, Indiana.

The Indiana Marriage Collection, at Ancestry.com, said Frink married on August 30, 1893; his wife’s name was not stated. His age was recorded as 21, which would place his birth in 1872.

Frink was the head of the household in the 1900 census. The family included his mother, brother and uncle; they lived in Indianapolis at 310 West Sixteenth Street. He was divorced and worked as a newspaper artist. His most famous strip, Circus Solly, ran in the Chicago Daily News beginning in 1904. (samples at Barnacle Press) The April 1903 issue of The Muse reviewed the second annual exhibition of newspaper artists of Chicago at the Art Institute. There were nearly 900 items in a variety of media on display. Below is the commentary on the artists from the Chicago Daily News.

L.D. Bradley, the stalwart cartoonist of the News, who writes strong editorials in his pictures, has loaned a number of his famous and finished drawings to this exhibit, and the artistic family of which he is the head is numerously and strongly represented. C.F. Batchelder presents clever character work; B E. Key a lot of bright, snappy sketches; George O. Frink, strong sketches replete in fun; likewise H.T. Webster and R.H. Garman.

Among his many series was The Goat Family (samples at Barnacle Press).He produced Getting Wise for the Chicago Daily News in 1909.

In the World Encyclopedia of Comics, Volume 5, Maurice Horn said:

…George Frink, an authentically funny cartoonist who is hardly remembered today; he also illustrated two Peck’s Bad Boy books: “Peck’s Bad Boy and the Circus” [1906] and “[Peck’s Bad Boy] and the Cowboys” [1907]. Frink’s style was sketchy and filled with native humor. His art was original but reminiscent of McCutcheon, Joe Donahey and early Herriman. There was free movement in his panels and as much slapstick as in Opper….


In the 1910 census Frink continued as the head of the household in Chicago, Illinois at 165 North Central Avenue. His mother, sister-in-law and niece lived with him. He worked as an artist at a newspaper. The same year the Indiana Society of Chicago published George Ade’s book, I Knew Him When—, which was illustrated with drawings by many cartoonists. Frink’s contribution was acknowledged on page 113:

John McCutcheon’s cartoons and caricatures will be identified without resort to explanatory notes.

The other artists implicated are F. Finch, of the Denver Post; F. Fox, of the Chicago Post; Kin Hubbard and Garr Williams of the Indianapolis News; George O. Frink of the Chicago News and Lawrence Erickson of New York City.

Frink did not sign his drawing, but a drawing on page 57, Studebaker protests against Fairbanks, appears to be in his style.


Horn also wrote, “Frink, who signed only his surname to his work and left his first name a mystery to comic historians for years, died in 1912.” Lambiek Comiclopedia said “Charles (George) Frink” died in 1911. His demise was greatly exaggerated.

Frink’s mother, the head of the household, and uncle were living with him in Chicago at 5021 Cottage Grove Avenue, as recorded in the 1920 census. His profession was an artist, but under the census column, Industry, it said General. Apparently Frink was no longer employed at the News or any newspaper.

In the 1930 census, he was an institutionalized patient at the Elgin State Hospital, a mental health facility in Illinois. According to the Illinois, Deaths and Stillbirths Index at Ancestry.com, Frink passed away November 17, 1932 in Elgin, where he was buried at the Bluff City Cemetery.

Comments:
Allan,
The profile mentions George Ade, John T. McCutcheon, F. Finch, F. Fox, Kin Hubbard, Gaar Williams, George O. Frink, and Lawrence Erikson. Every one of them was a Hoosier, most by birth, except that I don't know Lawrence Erikson's connection to Indiana. F. Fox was of course Fontaine Fox. F. Finch was Frank J. Finch (1879-1950), also known as Doc Bird, cartoonist for the Denver Post and Kansas City Post and an early collaborator with Damon Runyon.

Keep up the good work.
TH