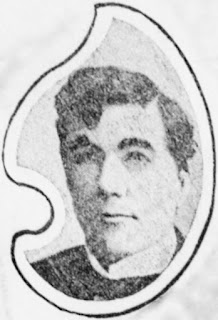 Frank Crane was born in Rahway, New Jersey in April 1857. His birth date was recorded in the 1900 U.S. Federal Census, and his birthplace was found in the passport applications of his wife and stepson. In the 1860 census, he was the oldest of three sons born to Joseph, a cabinetmaker, and Rachel; his older brother, William, was not, at the time, in the household which resided in Rahway. In the 1870 census Crane was not counted in the household but William was, as well as two more brothers. They family remained in Rahway.

Crane was a lithographic artist according to the 1880 census. He was still a member of his father’s household which lived in Rahway at 22 Adam Street. The New York Times, October 27, 1917, said: “…After graduation from the New York Academy of Design Mr. Crane became a cartoonist on The New York World and later art editor of The World, in the days before photography played a part in the makeup of a newspaper….” The New York Herald, October 27, 1917, said: “…In 1895 he became cartoonist and art director of the Philadelphia Press. Mr. Crane then came to the New York Herald. Later he was cartoonist for the Boston Herald….” The Times said:

The 1900 census recorded him in Jersey City, New Jersey at 25 Lembeck Avenue. The artist was married to Louise and had a son, Kent. He was one of fifteen cartoonists featured in “Cartoonists of America”, published in the Deseret Evening News, October 20, 1900. During this decade he produced the comic features Val the Ventriloquist, Philly Peno and Koko, Prof. Bughouse, Muggsy and Willie Westinghouse. 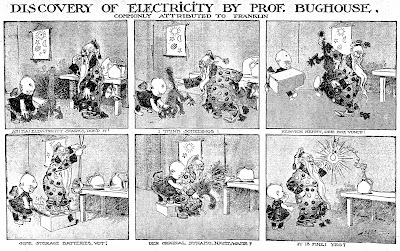 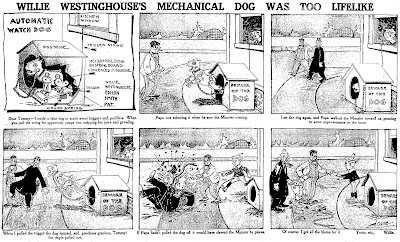 Crane’s home was in Bayonne, New Jersey at 46 East 46th Street, as recorded in the 1910 census. The newspaper artist’s household included a daughter, Roma. He had been married to Louise for 16 years (1894); it was her second marriage.

[Updated 4/10/2013] Cartoonist W.O. Wilson’s petition for naturalization was witnessed and signed by author George Folson, and Crane on December 8, 1911.

In the mid-1910s he produced Uncle Dick’s Contraptions. At some point, Crane moved to New Rochelle, New York, where he passed away October 26, 1917. According to the Times, he was “a descendant of an English Baronet, Sir Peter Crane. His ancestors founded the town of Crane’s Ford, now Cranford, N.J. He was a cousin of Stephen Crane, the author.” The New York Tribune, October 28, 1917, published a funeral notice:

His death was also reported in the New York Sun.