Frank H. Ladendorf was born in Syracuse, New York in October 1860, according to the 1900 U.S. Federal Census. His parents were German emigrants. He has not been found in the 1870 or 1880 censuses. According to the 1940 census, he had two years of high school education. For the Syracuse American (New York), April 8, 1928, he drew a panel highlighting his life and career (below) to accompany the profile:


When he was 16, Frank H. Ladendorf…was working as an apprentice in a machine shop in Chicago. He was still working in a machine shop when he reached the age of 27. But that year, during lunch hour, he put on a pair of boxing gloves, and during the course of an encounter with a blacksmith’s helper, bruised his left hand.

That was the luckiest thing that ever happened to Frank Ladendorf. He admits it.

The hand was badly bruised, and it swelled up so that it was impossible for him to work. He was given medical attention by a physician and force to remain at home.

During his idle hours, he started the habit of drawing sketches with his right hand. He drew quite a lot of them. By the time his left hand had been healed and he was ready to go back to his job, Mr. Ladendorf decided that he was never going to work in a machine shop again. And he didn’t.

Instead he went to the editor of the Chicago Mail and sold him a strip of cartoons. He sold other cartoons to Chicago papers, spending several years peddling wares of his facile pen to Windy City editors. It was better than working at a machine, he found; better than running a job press in a printing office, which he had done. It was the thing he had always wanted to do. But he didn’t know it until he bruised his hand and his free fingers had naturally picked up a pencil and fashioned a comical drawing.

In 1888 he became a cartoonist on the Chicago Mail. Five years later he moved to New York City and joined the staff of the The World. The American said: “...In the first supplement printed by the paper the day after he went to work on it, there were 30 of his cartoons distributed over eight pages…” 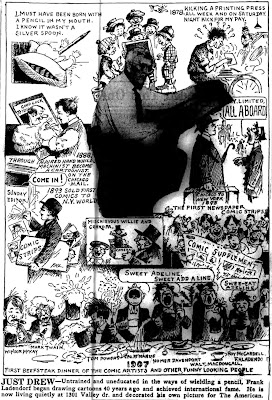 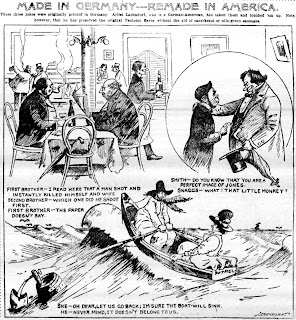 His marriage was noted in several New York newspapers including the Syracuse Courier (New York), April 8, 1897:

Miss Minnie H. Freeoff of North Salina street and Frank H. Ladendorf of New York were quietly married last evening by Rev. Dr. Clarke at his home in Walnut place. At 11:20 Mr. and Mrs. Ladendorf left for New York, where they will reside. The bride is well known in social circles on the North Side, and the groom is the head artist for the New York World.

In the 1900 census, he lived in Manhattan, New York City at 446 Manhattan Avenue. His occupation was artist. The American Art Annual 1900–1901 had the same address. In a few years the couple lived in Syracuse, New York, at 112 Wood Avenue, according to the Syracuse City Directory 1904. A year later, they resided at 1061 Cortland Avenue in Onondaga, located southwest of Syracuse.

The 1910 and 1920 censuses recorded them and daughter, Lucile, in Onondaga at 2057 Cortland Avenue. Ladendorf continued cartooning. A few years later the family moved to a new address, 1301 Valley Drive, as listed in the 1923 Syracuse directory. The Syracuse Herald-Journal, August 27, 1974, reprinted his June 17, 1927 cartoon (below) of Charles A. Lindbergh, who died the day before. 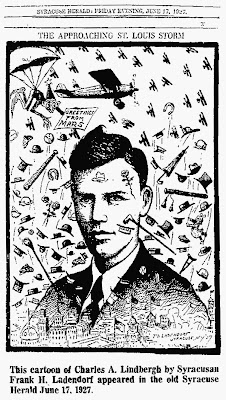 According to the Syracuse Journal, April 4, 1928, he retired in 1927 and was a gentleman farmer; a cartoon by him was published in the current Saturday Evening Post. The American said: “…And he has other materials upon which he works in his studio at his home. Illness in the family has prevented him from continuing a position in New York or some other large city. And besides, he likes to keep a few chickens and dig in the garden in back of his home once in a while. The paintings that he has made have been taken from scenes in Onondaga County….” On September 7, 1929, his wife passed away, as reported in the Syracuse Herald.

The 1930 and 1940 censuses recorded him and his daughter at the same address. Ladendorf passed away April 26, 1943 in Syracuse. His death was reported the following day in the Herald-Journal.

Frank H. Ladendorf, one of America’s pioneer newspaper cartoonists and a resident of Syracuse for more than 40 years, died Monday afternoon at his home, 1301 Valley Drive, after a long illness. He was 82 years old.

He worked for the World 10 years and then returned to Syracuse. He continued to send comics to the metropolitan paper, but devoted most of his time to freelancing. Until his recent retirement he drew advertising cartoons as well as comics for magazines and trade publications.

Mr. Ladendorf was a member of Syracuse Masonic Lodge 501, F. and A.M., and the Central City consistory. He was a member also of Tigris Shrine and of the Valley Presbyterian Church.

He is survived by a daughter, Miss Lucile F. Ladendorf; two sisters, Mrs. Ada McKee and Mrs. Louise Delany, and a nephew, Dr. S. Howard Delaney. Services will be conducted at 2 P.M. Thursday at the A.C. Schumacher memorial home. Burial will be in Woodlawn Cemetery.