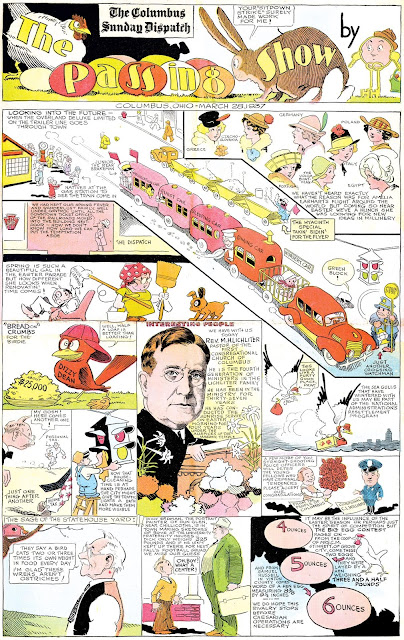 Harry James Keys was born in Alliance, Ohio on May 1, 1886, according to his World War I and II draft cards, and marriage certificate, all found at Ancestry.com. In the 1900 U.S. Federal Census, he was the second of two children born to James and Elizabeth. They lived in Cuyahoga Falls, Ohio on Newberry Street. His father was a railroad engineer. The Plain Dealer (Cleveland, Ohio), June 14, 1948, said: “...He joined the old Akron Times early in the 1900s after graduating from the Chicago School of Fine Arts….”


He has not been found in the 1910 census. The Plain Dealer said: “…He came to Columbus in 1911 as a Citizen cartoonist, subsequently shifting to the Dispatch.” According to the Summit County, Ohio, Marriage Records, 1840-1980, at Ancestry.com, Keys married Katherine Ruth Vogan, a school teacher, on October 22, 1913. Their wedding was reported in the Plain Dealer October 26.

The American Art Annual Volume 12 (1916) listed him as a Columbus Citizen illustrator and member of the Pen and Pencil Club. Keys signed his World War I draft card August 31, 1918. He lived in Columbus at 2182 Summit Street. His occupation was cartoonist at the Columbus Citizen. He was described as tall, slender with gray eyes and dark brown hair.

The 1920 census recorded him in Columbus at 2182 Summit Street. The household included a son and daughter. His occupation was newspaper cartoonist. The Educational Screen, January 1927, focused on the use of motion pictures in “Home-Talent Movie Floats Bond Issue”.

Widespread interest has been aroused in the means by which Columbus, Ohio, organized a campaign for the passage of a $1,250,000 bond issue, to beautify the surroundings of the proposed new City Hall and civic center in the central portion of the city, on the bank of the Scioto River.

The chief factor in the campaign was a motion picture film visualizing the need for beautification, planned and executed by George Karb, formerly mayor of the city. Its effectiveness is shown by the fact that, after its display widely in local picture theatres, the bond issue which had failed once of passage, and which citizens had regarded coolly, went over by a large majority.

Backers of the proposed bond issue, which architects and engineers had held would provide for property acquisitions needed to prevent erection of structures not in harmony with the municipal improvement project, called the former Mayor from his business interests to take charge of the campaign.

Among the first things he did was to seek to visualize to the Columbus public how the new City Hall would appear if the outlying sites were not purchased and “shacks” should be erected on them.

This he accomplished through having motion pictures made of himself and Harry Keys, newspaper cartoonist, discussing the project which was depicted before them on an artist's easel in the form of a large drawing of the new City Hall, a building of beauty, with the “shacks” pictured in the foreground. The picture in perspective was startling, but after some conversation between them, shown in the sub-titles, Cartoonist Keys with a brush of white paint eradicated the disfiguring structures, leaving the City Hall standing alone in all its beauty.

In “selling” ideas to the residents of Columbus and Franklin County which call for the co-ordination of community effort, officials behind campaigns designed for city or county benefits are resorting more and more to motion pictures.

The 1940 census recorded him in Bexley, Ohio at 2661 Bexley Park Road. The record showed the newspaper cartoonist had two years of college. On April 26, 1942, he signed his World War II draft card. His residence was in Bexley, Ohio at 2661 Bexley Park Road. He was employed at the Columbus Dispatch. His description was five feet ten inches, 180 pounds, with blue eyes and gray hair. Keys passed away June 13, 1948 in New York City. The Coshocton Tribune, (Ohio), June 14, reported his death.

Police listed the case as an apparent suicide, but said they were unable to determine the cause of death immediately.

His wife, Ruth, aged 58, was in a critical condition today from what authorities described as “possible barbiturate poisoning.” She was found unconscious on a bed in their room. Keys' body clad only in a bath robe was between the beds.

The Keys had left Columbus Saturday for a short New York vacation.

Keys began his newspaper career with the now defunct Akron Times early in the 1900's. He transferred to the old Youngstown Telegram a short time later and subsequently joined Scripps-Howard news service with the Oklahoma News. He came to Columbus in 1911 as a cartoonist for the Citizen and had been with the Dispatch about 18 years.

Keys was found dead Sunday night in his Hotel Lexington room and police first listed it as an “apparent suicide.”

His wife, Ruth, 58, was found unconscious in the room. She was reported in good condition at Metropolitan hospital today.

She told police her husband was upset after she took four sleeping pills. He took the bottle of pills from her, she said, and collapsed a few minutes later after telephoning for the hotel physician.

Dr. Vance said the 55-year-old Keys’ death was “not suspicious.” The Medical Examiner said Keys died of congestion of the viscera.

The body was claimed by a son, Dr. Harry J Keys Jr. of St. John's hospital, Brooklyn. He said burial will be in Columbus.

On June 26, a final ruling on Keys’ cause of death was published in the Coshocton Tribune.

Keys was found dead in his hotel room June 13. His wife, Ruth, 58, was unconscious in the same room.

A preliminary report by Dr. Thomas A. Gonzales’ assistant gave congestion of the viscera as the death cause. Mrs. Keys later told the police she had taken an overdose of sleeping pills.