Nat Edson was born Nathaniel Edelstein in Brooklyn, New York on February 1, 1909. His date of birth is from the Social Security Death Index, and his birthplace was named in the magazine, Young Wings, April 1950. In the 1910 U.S. Federal Census, he was the only child of Samuel and Dora, both Russian emigrants. They lived in the Bronx, New York at 1789 Fulton Avenue. His father was a self-employed tailor.

In the 1915 New York State Census, six-year-old Edson was a patient at the Neponsit Beach Hospital for Children. He explained his childhood injury in Young Wings:

You never can tell what circumstances will start a boy on a career. It was an accident I had when I was five years old that launched me on my career as an artist. Our home was in Brooklyn, New York, where I was born. In those days the city had not as yet caught up with our house. There were still many farms around and plenty of hills for coasting on sleds in the winter and on bicycles in the summer. One day the front wheel of the bicycle on which I was riding with another boy struck a rock and over we fell. The next six years I spent in a hospital, for I was completely paralyzed. Since I could not use my legs, I soon started drawing the things around me. When this got tiresome, I made things up and lived much of the time in a dream world. As soon as I was able to play with other boys and the girls down on the lawn or in the sand lot, we built castles out of mud and sticks.

During the first World War there was an army training camp near our hospital, and the soldiers often came over to play with us. One of them showed me his drawings and gave me some helpful instructions. Later, after I left the hospital, I studied for a short time at the Art Students' League and had some training in teaching art at New York University.

Edson’s home in 1920 was in Brooklyn at 541 Van Siclen Avenue, where he lived with his widower father, brother Jerome, and maternal grandparents; his grandfather, also a tailor, was head of the household. Around 1925, his father remarried to Annie according to the 1925 New York State Census. They lived at 156 East 29th Street in Brooklyn.

The 1930 census had the same address for the Edelstein family which had grown to five with the addition of Lorraine. Edson’s occupation was newspaper artist. In The Funnies (1995), Ron Goulart said Edson was one of several ghosts on Lyman Young’s strip, Tim Tyler’s Luck:

…In the early 1930s it was the young Alex Raymond and he was followed by Charles Flanders, Burne Hogarth, and then Nat Edson. Physically handicapped, Edson had begun working for King Features as an office boy and then moved into the art department. He developed an effective and personal variation of the Raymond style and drew Tim Tyler from the middle 1930s to the middle 1940s. While working for Young, Edson created the Sunday topper page Curly Harper, which began in March 1935…. 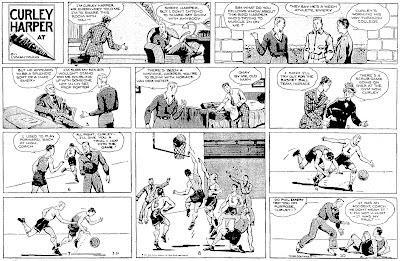 Edson has not been found in the 1940 census. From the late 1940s to 1972, he produced material for a number of comic book publishers, especially westerns for Dell Publications and Western Publishing. His contributions to the Roy Rogers comic book was noted in Roy Rogers: A Biography, Radio History, Television Career Chronicle, Discography, Filmography, Comicography, Merchandising and Advertising History, Collectibles Description, Bibliography, and Index (1995). Some of his comic book credits are at the Grand Comics Database.

Who’s Who of American Comic Books 1928–1999 said he was a teacher at Burne Hogarth’s Cartoonists and Illustrators School in the late 1940s. In 1949, he illustrated Adolph Regli’s Fiddling Cowboy. In Young Wings, Edson said: “…I always read a great deal and I drew the things I read about—ships in a storm or caravans crossing a desert or cowboys riding horses. Anything in the line of adventure appealed to me, and that was what I liked best to draw. So you can see that making the illustrations for your new book, Fiddling Cowboy, was really not a task, but a pleasure for me.”

Edson was married, however his wife’s name and the wedding date and place have not been found. They were mentioned in a 1954 issue of Illinois Libraries:


…Some park visitors develop an interest after observing the museum exhibits and come to the library to perform research as a result. Two of our visitors during the 1954 summer were among these. Mr. and Mrs. Nat Edson from Los Angeles spent 3 days in this pursuit and in reading for enjoyment. Mr. Edson, a cartoon artist who does Gene Autry comic strips, was interested in accounts of Yosemite artists, and Mrs. Edson, whose work is with dancing, spent her time doing research on Eadward Muybridge.…

Who’s Who said he retired from comics in 1972. Edson passed away May 28, 1974, in Los Angeles, California, according to the Social Security Death Index. The California Death Index, 1940-1997, at Ancestry.com, has identical information for him as Nathaniel Edelstein and Nate Edson. A death notice was published in the New York Times on May 30 and 31, 1974.

He was buried at the Riverside Cemetery in Saddle Brook, New Jersey, according to Find a Grave. Some profiles have his death occurring in 2001; it is not known who or what was the source was of that date. AskArt.com has an example of his portraits.

Very nice profile of Nat Edson. Actually, he was Tim Tyler's Luck ghost par excellence, working on the strip continuously for ten years, 1934 to 1944 (although Al McWilliams did a brief stint in 1935), before the drawing was handed over to Clark Haas and then to Tom Massey.

His work on the Gene Autry strip is also mentioned. In fact he worked on it for about a year in 1954-55, after Tom Massey and before Mel Keefer. There, too, he was a ghost, hidden behind the house name "Bob Stevens" ("Bert Laws" was Albert Law Stoffel). Gene Autry was packaged by Western Printing, where Edson did most of his comic-book work. If I remember correctly, the very last things he did for Western were text illustrations in Walt Disney Comic Digest. But of course he's best remembered for Roy Rogers, Annie Oakley, Wagon Train, Gene Autry. He also drew Disney's Kidnapped film version and such non-western strips as The Detectives.

Thanks for remembering him.

I am Nat's niece, daughter of his brother, Jerome. Some comments:
. I never heard Nat referred to as Nate.
. He lived on and Indian reservation in Taos, NM for a time in the 50s.
. He was never married that's why you couldn't find the record although he had a lady friend for awhile.
. Although he died in LA, his service was in Rockville Centre, NY because that's where we lived.

Thanks for the information, Ellen. The reporter mistook Nat's lady friend for his wife.