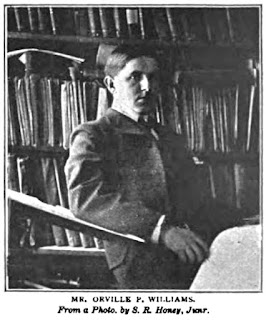 Orville Peter Williams was born in Vassalboro, Maine on March 7, 1876. His full name and birth date came from his World War I draft card, and his birthplace was named in a profile published in the St. Albans Daily Messenger (Vermont), April 24, 1903. In the 1880 U.S. Federal Census, he was the third of five children born to Peter and Margaret. They lived in Vassalboro, where his father worked in a woolen mill. The family eventually moved to Boston where he attended English High School and won a drawing prize, which was noted in Annual Report of the School Committee of the City of Boston, 1894: “For Drawing. — First Prizes. — (First Class) — William F. Howes, Orville P. Williams.” The preface to Elements of Botany (1896) said: “…The illustrations drawn from nature, or redrawn expressly for this book, are mostly by Orville P. Williams or Francis M. West, recent graduates of the English High School….” He was credited in Adobeland Stories (1899) for his title page illustration, which, unfortunately, cannot be seen due to the quality of the scan. The Boston Herald, January 3, 1944, said he attended the Boston Museum of Art.

In the 1900 census, he and his brother Samuel lived with their mother, a widow and head of the household. They resided in Boston, Massachusetts at 23 Mansfield Street. Both brothers were woolen merchants. The Strand Magazine, November 1902, reported Williams abrupt change of careers.

...Mr. Orville P. Williams, who is now the chief cartoonist of the Boston Herald, began, it is true, as an artist, but owing to the failure of his father's health “had,” as he says, “to quit and take up the woollen [sic] business in which my father was engaged.” Mr. Williams adds, with significance: “Having but little heart for business, my career was a large and elegant ‘fizzle.’ ” He thereupon turned to cartoon work, and since then has made a gratifying success, which bespeaks great credit for a young draughtsman such as he. Mr. Williams is now twenty-six years old, and , although born in Maine, was educated in the Boston public schools.

That Williams cares not for the bludgeon is sufficiently proved by the delicacy of his work here reproduced. One or two of these cartoons are already well known to the people of the United States, owing to their repetition in papers outside Boston. That showing Russia and France hoeing together in the Chinese potato patch, with the Kaiser enviously watching from the top of a ladder perched against the sign in the background, tells an excellent little story, although few cartoons could exceed in merit that which represents Uncle Sam and his ink-stained hat standing in an attitude of reproof before the bad and wicked boys from France, Italy, Germany, and Austria. The Herald, in the person of its cartoonist, has had several sly digs at the foreign Powers who tried so energetically to prove that during the Spanish-American War each was Uncle Sam’s best friend….

He was one of several newspaper artists named in a 1902 issue of The Studio. The St. Albans Daily Messenger profile said:

Maine Boy’s Success.
Orville P. Williams, One of the Leading Cartoonists of the Country.


But 26 years old and chief cartoonist of The Boston Herald, is the place that Orville P. Williams, born and brought up in Vassalboro, Me., has made for himself, and it is predicted by heads of art departments all over the country that he will some day outrank any cartoonist America has ever produced. This is but one of the many instances constantly coming up that show what Maine boys are made of and make one proud of their Pine Tree state.

Mr. Williams began as an artist, but owing to the failure of his father’s health “had" as he says, “to quit and take up the woolen business which his father owned,” and adds with significance “that having but little heart in the business my career was a large and elegant fizzle.” He, therefore, returned to his art and at once attracted attention by his humorous drawings. His original and unique style quickly “caught on” and his sketches were soon in demand by newspapers and comic weeklies. But he was not satisfied with simply being funny, but sought the more serious side of comic illustrating—the cartoon. His cartoons now appearing daily in The Boston Herald are reproduced by newspapers and magazines everywhere. His work is delicate, his style original, and as a leading New York publisher said, “one of his cartoons tells more than a column editorial could.” The Strand magazine, in a recent article, “The American Cartoonist and His Work,” placed him in the front rank of our cartoonists. His work is sought after by book publishers and comic weeklies, but he prefers to give his time to his cartoons. As he says, “If I spread my work everywhere it will become commonplace and I had rather make the mistake of giving the public too little of it than too much.” It was, therefore, quite a surprise when it became known that he had drawn a series of comic illustrations to be used as advertisements by The Quinona company. The bright verses have given Mr. Williams an excellent opportunity to caricature the funny situations. His 14 illustrations published in book form, although an advertisement, have made a big hit and are well worth looking over. Each drawing will bring a laugh and that is worth a good deal these days. The Quinona company, Hartford street Boston, had placed these booklets in all the retail drug stores where one can be had free for the asking or one will be sent you by sending your name to their Boston office.

Williams was one of seven vice-presidents of the Newspaper Artists’ Association, according to the American Art Annual, 1903–1904, Volume 4. The Literary Digest, February 13, 1904, paired cartoons by him and Luther D. Bradley. According to the Pennsylvania, Church and Town Records, 1708-1985, at Ancestry.com, Williams married Grace Nelson Woodfall on March 10, 1906 at the Holy Trinity Episcopal Church in Philadelphia, Pennsylvania. One of his Philadelphia Public Ledger cartoons of Theodore Roosevelt was published in the book, T.R. in Cartoon (1910), on page 208. The Fourth Estate, March 20, 1909, said: “O.P. Williams, the cartoonist who in 1904 went from the Boston Herald to the Philadelphia Public Ledger, is again drawing cartoons for the Boston Herald.”

In 1910, Williams, Grace and their three children lived in Boston at 74 Carruth Street. He was a newspaper cartoonist. During his time in Boston he produced many strips including Mrs. Fret-Not. The National Magazine, August 1912, said, “…‘Papa Buys Some Diamonds’ will be illustrated by Orville P. Williams, the cartoonist who came into national prominence through his ‘Claribel’ series of comics….” He signed his World War I draft card on September 3, 1918. His address was 218 Summer Street in Malden, Massachusetts. The cartoonist worked for Star Publishing, a Hearst company in New York City. His description was medium height and build with blue eyes and brown hair.

According to the 1920 and 1930 censuses, Williams lived in Brooklyn, New York at 130 East Nineteenth Street, where he continued as a cartoonist; he was an editorial cartoonist for the New York Evening Graphic through the mid- to late-1920s. His panel, Rare Oddments of Sportsdom, appeared briefly in the Evening News (Tonawanda, New York) in 1930 and 1931. Readers were encouraged to send their suggestions to him at “P.O. Box 77, Varick Street Station, New York, N.Y.” At some point, he moved back to Massachusetts.

The 1940 census recorded him and his wife in Rockport, Massachusetts at 33 School Street, where his mother-in-law was head of the household. He was a newspaper cartoonist who had four years of high school education. Williams passed away January 2, 1944, in Gloucester, Massachusetts. The Boston Herald reported his death the following day.

Rockport Jan. 2—Orville P. Williams, for many years staff cartoonist for The Herald and The Traveler, died today at the Addison Gilbert Hospital in Gloucester. He was 67, and lived at 33 School street, Rockport.

He was born in North Vassalboro, Me., and attended the school of the Boston Museum of Art. After working on the Philadelphia Ledger, he returned to Boston in 1907. He remained with the Herald and Traveler until 1919, when he joined the staff of the New York Journal.

As newspaper cartoonist, fulfilling many of the functions of today’s photographers, he met and knew many of the prominent figures of his time. For the past few years he lived in Rockport, lecturing and doing free lance work.

He leaves his wife, two daughters, Miss Margaret Williams and Mrs. William T. Pape, both of Plainville Ct., and two sisters. Services will be held tomorrow at 2 P.M. at the Burgess Funeral Home, Rockport.

Comments:
He was also a sports cartoonist for the Boston Journal in 1912-1913. When their well-respected cartoonist Sid Greene left, Williams handled baseball cartoons for the Journal. At first, he used the name O.P. Williams, and then in 1913, he bylined as "Pete Williams."

In 1896, he did some work in a little magazine of the 1890s called Miss Blue Stocking, edited by Richard Gorham Badger. An issue for April 1896 credits him with the "various exceeding clever black and white sketches scattered throughout the book, and a double page poster sketch in color."

Hello, I was pleased to find out about OP. His daughter, Ruth Pape is still alive at 104! She was my mother's friend when we lived in CT, both born in 1910. I am in contact with her and her son. She told me about her father, has some of his work framed in her home. Sad there was never a published collection of his work. This discovery of OP has stimulated an interest in historic cartoons in me, and I am currently exploring Wonder Woman through the new release by Jill Lepore. You could reach Ruth's son Bill if you want, wpape@sbcglobal.net
Thanks,
Carolyn Boardman

Great information! I'll be doing some research in plans for an article for the Vassalboro (Maine) Historical Society. I've seen several of his personalized Christmas cards to the family, as well as a couple of large cartoons. Great stuff!

Jan, I would suggest that you get in touch with OP's grandson, Bill Pape at wpape@sbcglobal.net. That way I am not in the middle.
Thanks . Good luck with the article.