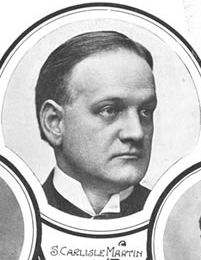 Samuel Carlisle Martin was born in St. Louis, Missouri on November 13, 1867, according to a family tree at Ancestry.com. His middle name was his mother’s maiden name. In the 1870 United States Federal Census, he was the third of four sons born to John and Hattie; apparently he was born shortly after his twin brother John. His father was a railroad ticket agent. The family lived in St. Louis.

The 1880 census recorded the Martin household of seven in St. Louis at 2608 Gamble Street. Martin attended the School of Fine Arts at Washington University in St. Louis; his name was found in the Catalogue of the Officers and Students of Washington University for the academic years 1885–86 and 1887–88, which also listed his brother, John. The family tree said Martin married Lynn Shackleford on October 30, 1897.

The 1900 census recorded Martin, his wife (listed as Lena), and brother John in St. Louis at 3848 Page Avenue. Both Martins were newspaper illustrators. They contributed to the book, St. Louisans “as we see ’em”: Cartoons and Caricatures (1903). Martin participated in two 1902 newspaper artists exhibitions as reported in the St. Louis Republic on March 29 and October 19. He contributed a caricature to the magazine, Book of the Royal Blue, May 1904. The Cleveland Plain Dealer, May 11, 1909, published quotes by Ty Cobb, who was interviewed by Martin, a St. Louis Post-Dispatch cartoonist and baseball writer.

The Martin household included a son and daughter in the 1910 census. They lived in St. Louis at 5188 Morgan Street. In this year, Martin started drawing the Weather Bird cartoon for the Post-Dispatch. He did the Sunday feature in 1912 from around March to late December.

The family of four resided at 511 South Geyer in St. Louis, as recorded in the 1920 census. Martin continued as a newspaper artist. The Kansas City Star (Missouri), October 12, 1922, printed his drawing.

The “Donkey” Is No More.
“Goddess of Liberty,” New Democratic Emblem Officially Filed

The design will appear on the ballot above the name of the Democratic party in the November election. The new blanket ballot law authorizes political parties to adopt party emblems.

The drawing for the emblem was made by S. Carlisle Martin, a St. Louis artist.

In the 1930 census, the household of three was at 6117 Washington Place in St. Louis; their son, Samuel Jr. had moved out. Martin passed away August 17, 1932, in St. Louis. His death was noted the same day in the Monitor-Index and Democrat (Moberly, Missouri).

“Weather Bird” Artis Dies at Age of 64
St. Louis, Aug. 17 (AP)—Samuel Carlisle Martin, head of the art department of the Post-Dispatch and who for twenty years has drawn the “Weather Bird” cartoon which appears daily on the front page of the newspaper, died of heart disease at his home here today. He was 64 years old.