Albert Jacob Fagaly was born in Kentucky on January 5, 1909, according to the California Death Index at Ancestry.com. There are three family trees at Ancestry.com; one of them has his middle name, while the other two say he was born in 1908. His son, Robert, wrote about his father and it was posted at a family tree. In the 1910 U.S. Federal Census, Falgaly was the youngest of three sons born to Robert and Laura [sic: Lura, according to Robert]. They lived in Waynesburg, Kentucky. His father was a farmer.


In the 1920 census, Fagaly was the third of five sons. They lived in Vancouver, Washington at 704 West 18th Street. His father was a carpenter at a shipyard. About his father's childhood, education and occupation, Robert said:

…From his telling, his schooling was average except in geometry, in this he was extremely good…in fact one of his teachers suggested that he go on to college...But, I think that geometry was the only technical subject that he excelled in. He was editor of his high school yearbook and graduated from Fort Vancouver High School. And while in high school, was a member of an amateur boxing team and played baseball….He also had a good art teacher.

After high school, the depression hit and he opened up a second hand store….People at that time were in need of money, so my Dad’s second hand shop was quite good. But he also wanted to get his cartoons in the papers. The local newspaper “The Vancouver Columbian,” could not afford to have photo-engraving plates made, so my father opened up a photo-engraving shop which eventually became “The Columbia Photo-Engraving” and he would supply them for free (in the late 1920's), if they would buy his cartoons, which they did. That is how he got started in newspapers as a cartoonist.

He also did sign painting, as one of those things for extra money. He did swap outs, where he painted signs, for someone for free and in return would take clothes and other services. He did not want to be a painter, but he did want to be a cartoonist. That was his goal….

The Fagaly family was recorded in the same city according to the 1930 census; the address is illegible. Fagaly's occupation was sign painter. The Miami Daily News (Florida) article “Al Fagaly Talks of Cartooning Career”, published April 1, 1949, said:

Although he never attended art school he took a correspondence course from the Landon School of Art. This, he said, helped him more than anything else in his art work.
Al Fagaly tried for 15 years to break into the field of syndicated cartooning but he never gave up when he was turned down. When he finally did have his drawings syndicated, he worked on such cartoons as “Super Duck” [a comic book character] and Jimmy Hatlo's “They’ll Do It Every Time.”

Robert wrote, “In the 1930's he moved to New York and began one of the many attempts to become a successful cartoonist. He did comics—seven or eight comic books, on his own and with others. He did many strips in the 30’s and 40’s….And one of his roommates in New York was Mickey Spillane, who was also trying to write a novel. He was either the best man at my father's second marriage, or was my Godfather….” Fagaly may have ghosted Calvin Fader’s Doggy Dramas Present in the late 1930s. His comic book credits are here. 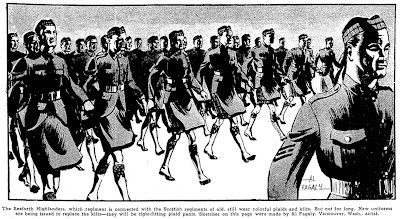 Illustration from The Oregonian Magazine 11/12/1939

In the 1940 census, Fagaly was a member of his brother’s household in Vancouver, Washington at 508 West 9th Street. He was a commercial artist in a photography shop, and had four years of high school education. Robert said his father met Justine Lewis around 1941, and in 1942 they went to Washington and married. They returned to the east coast, where Robert was born in Massachusetts. He said the idea for There Oughta Be a Law (originally called The Bitter Laff) came in November 1944. It was sent to Harry Shorten, and, quickly picked up for syndication.

According to Robert, “When I was two weeks old, we moved from Nantucket Island to New York City, where the family lived till my sister Rusty was born. It was later that same year that my father and mother were divorced….”

Around this time, the strip Cringely was developed but it is not known if it was ever syndicated. With custody of his children, Fagaly moved to upstate New York. Robert said, “During that stay, he hired a baby sitter, who was the younger sister of the wife of…cartoonist, Eddy Coggin. This was Margaret Farrell, and then in 1947, [we] moved to Florida and on the way down, she and my father were married, I believe in Georgia.”
Robert said they moved for his health, in 1950, to North Miami, where his younger sister was born. They lived there until 1958, then moved to Pasadena, California before settling in Newport Beach, where Fagaly had a close friend. In 1962, they moved to the Irvine area.

Fagaly passed away April 25, 1963, in Orange, California, according to the California Death Index; Robert said the date was April 23. The Press-Courier, (Oxnard, California), published news of his death April 30.

Newport Beach (UPI) - Funeral services were to be held to day for Albert Fagaly, 54, creator of the syndicate cartoon “There Oughta Be a Law” that appeared in 300 daily newspapers.

Survivors include his widow, Mrs. Margaret Fagaly, a son, Robert, and two daughters, Russelle and Maralyn.

Comments:
Interesting! It was always obvious that Fagaly was heavily indebted to Jimmy Hatlo.

Do you know if he worked directly for Hatlo as an assistant, or if he worked on "It Happens Every Time" as a syndicate employee?