Melisse was the pseudonym of Mildred Oppenheim, the wife of Samuel Oppenheim. Mildred’s maiden name has not been found. According to two New York passenger lists, she was born May 20, 1905 in Newark, New Jersey. A third list had her birth as “Mar 20”, which, probably, was a misreading by the typist. Information about her parents, education and art training has not been found.

The 1930 U.S. Federal Census recorded the couple in Newark at 279 Goldsmith Avenue. Married for three years, both were commercial artists employed at advertising companies and their parents were born in Russia. December 1931 was a pivotal moment for Oppenheim who would be known nationally as Melisse. How she acquired that name is not known. The New York Sun, December 12, 1931, had an advertisement for Lord & Taylor’s invitation to the public to attend an upcoming exhibition of Melisse’s work. 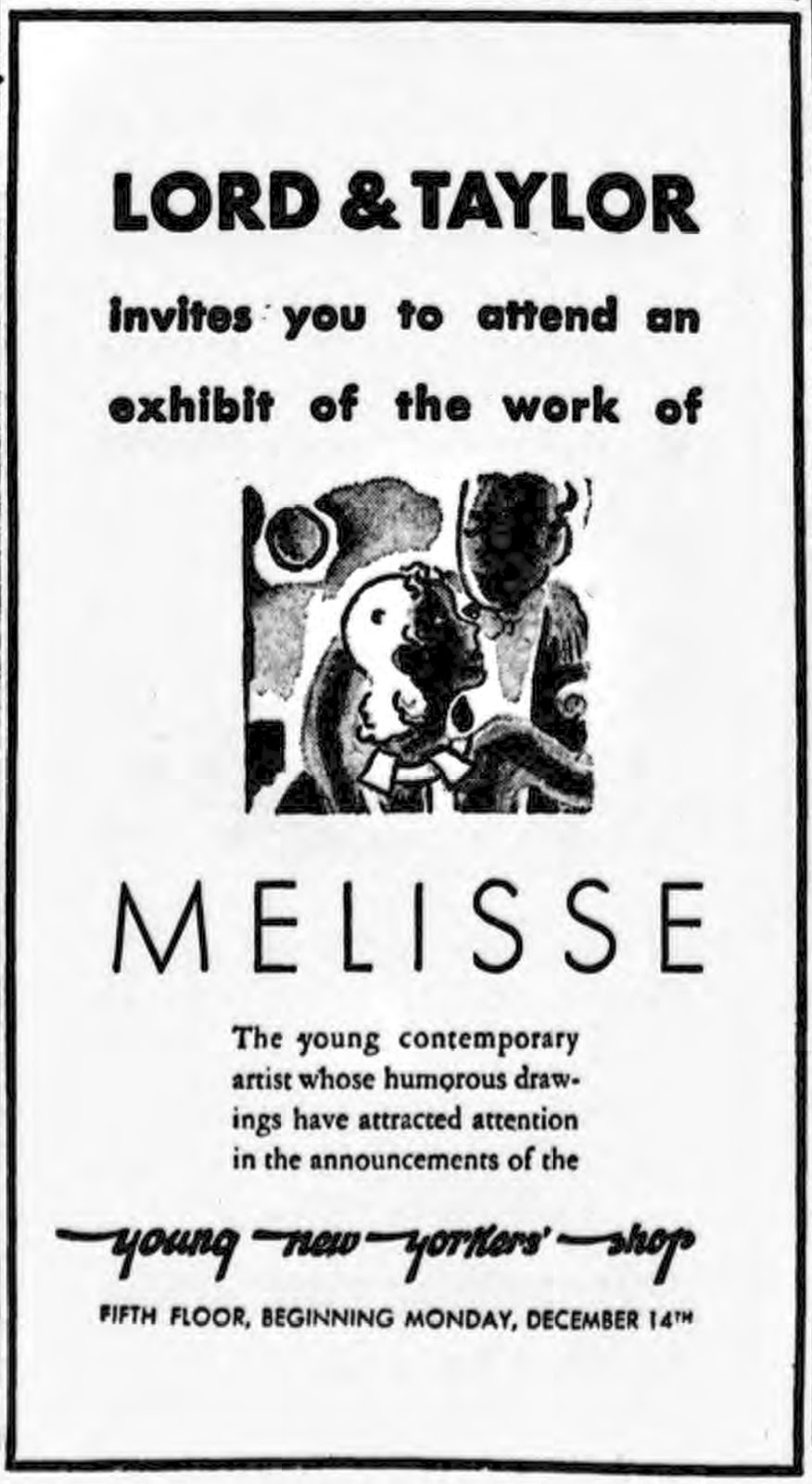 Fashion Illustrations Shown.
An exhibition of sketches, introducing a new method of fashion illustration, opened today in the Young New Yorker’s Shop at Lord & Taylor, Fifth avenue. The drawings are the work of Melisse, a young artist discovered by Harry Rodman, art director of Lord & Taylor.

The New York Times, December 19, 1931, review said: “ ‘Melisse’ is…a wicked and telling satirist—almost a feminine counterpart of Peter Arno. Her women are lissome beyond all belief and have eyelashes that would shame Greta Garbo. Besides charming people sunning themselves at Biarritz of gliding with superb disdain from the side door of the Metropolitan, the exhibition includes several covers for Charm and two interesting portraits.”

Seven bronze medals were awarded for work displayed in the exhibition of advertising art, which opened at the Art Center, 65 East Fifty-sixth street, under the auspices of the Art Directors Club. Six exhibitors received honorable mention.

…The medalist in the black and white illustration group was J.W. Williamson, while Peter Arno and Melisse were awarded honorable mention….

Appearing every Saturday in the women’s pages of the Sun, the Real News of New York…A Preview of What’s New strip was a series of panels, each with a block of text about an item, activity or event. A start date was not been determined and it appears to have ended in November 1935. An ad for the strip in the Pelham Sun (New York), December 14, 1934, has a photo of Melisse. 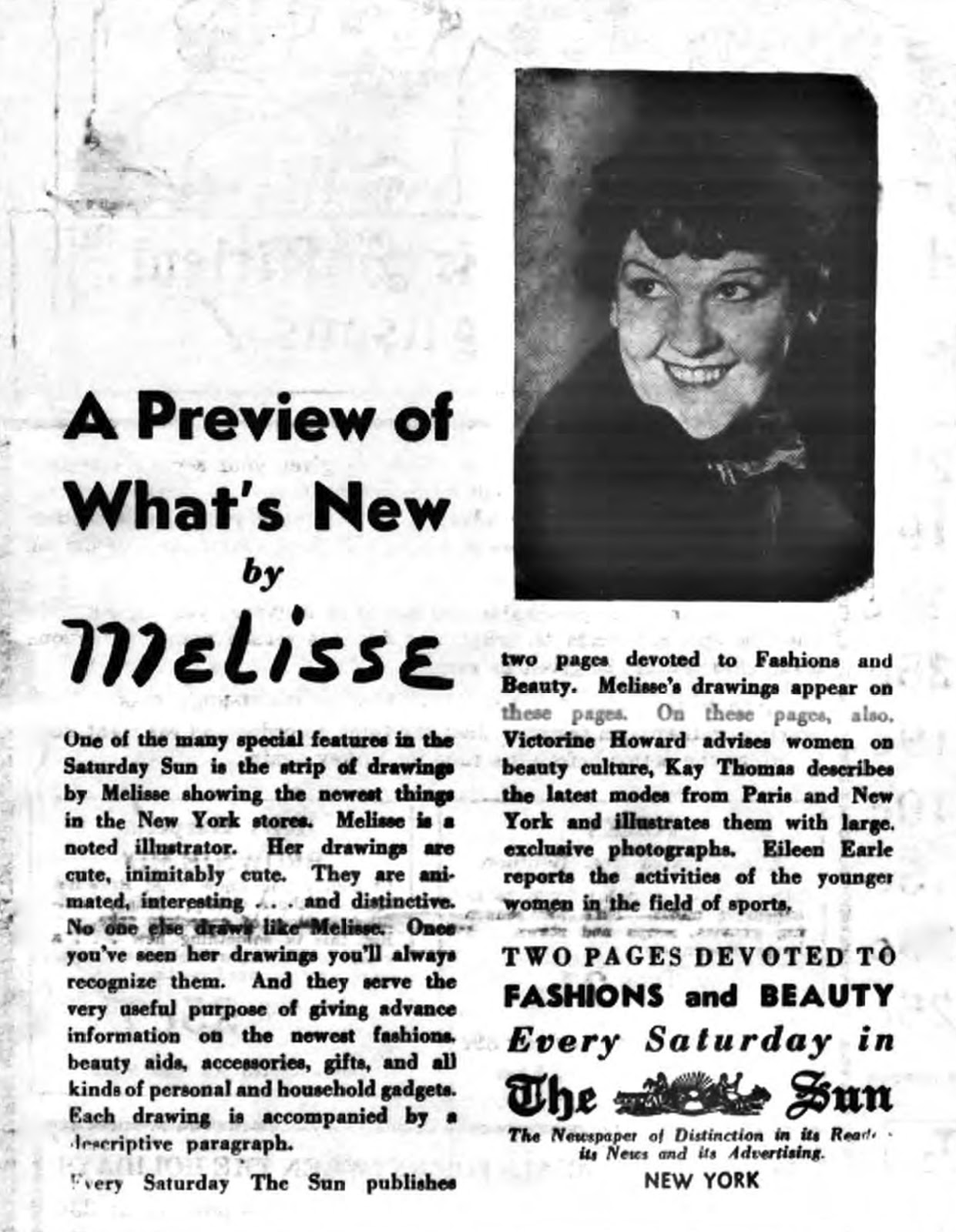 On three consecutive years Oppenheim sailed to Europe; according to the passenger lists, in 1932 she lived at 87 Vassar Avenue, Newark, New Jersey; in 1933 at 1 University Place, Apartment 19D, New York, New York; and in 1934 at 299 West 12th Street, New York, New York. The Times, June 7, 1936, said she was a member of the Cartoonists Guild of America, which formed in March 1936. Evidently King Features was impressed by her work and syndicated her panel Diary of a Good Girl in 1937.

The 1940s began badly for Oppenheim, who has not been found in the 1940 census. The Times, January 31, 1940, reported she had filed a petition for bankruptcy: “Mildred Oppenheim, freelance artist, 383 Central Park West—Liabilities, $3,714; no assets.” However, she recovered quickly with her advertising panel, Around Town with Melisse, which featured Ohrbach’s, a department store. The campaign drew the attention of Life magazine, June 23, 1941. Less than a month later, Sales Management, July 15, 1941, reported the campaign’s genesis.

Meet Melisse
New York has a new glamour girl…Melisse of Orbach’s [sic]. The little blonde bomber made her debut in the local press a while ago, and has been wowing her female fans as well as the buying stag lines ever since. Orbach’s [sic] is a self-service clothing store which is currently trying to “trade up.” The store uses no merchandise ads, but runs full page institutionals instead

When Easter was past, and the regular campaign ended, General Merchandise Manager Jerry Orbach [sic] got together with commercial artist Mildred Oppenheim, and cooked up a series of ads, “Around Town with Melisse.” The cartoon ads were placed in all major local papers…anywhere from two to five times a week. Readers soon began to follow the adventures of Melisse as devotedly as they do “Tillie the Toiler,” etc.

Melisse is not only charming, but is a breadwinner as well…having more than earned her keep in luring the smart money crowd to the local store. The campaign has attracted such wide attention that Life magazine recently devoted several pages to her. This is the first time Life has ever featured an advertising campaign. In addition, it is now rumored that Melisse might even have her own debutante department at Orbach’s [sic] one of these days. Hers is the story of a small space advertising campaign which made good.

Grey Advertising is the agency.

The success of Around Town led to syndication as reported in the New York Post, February 27, 1942:

Melisse to Syndicate Cartoon Advertising
Melisse, creator of the cartoon advertising “Around Town With Melisse,” will syndicate the feature throughout the country on the basis of one leading store in a trading area, it was announced today.

Arrangements are being handled exclusively by the Melisse headquarters at 59 West 44th St. Additional promotional helps for subscribers such as Melisse mannequins for window and counter displays, clothing designs and seasonal ideas are contemplated. 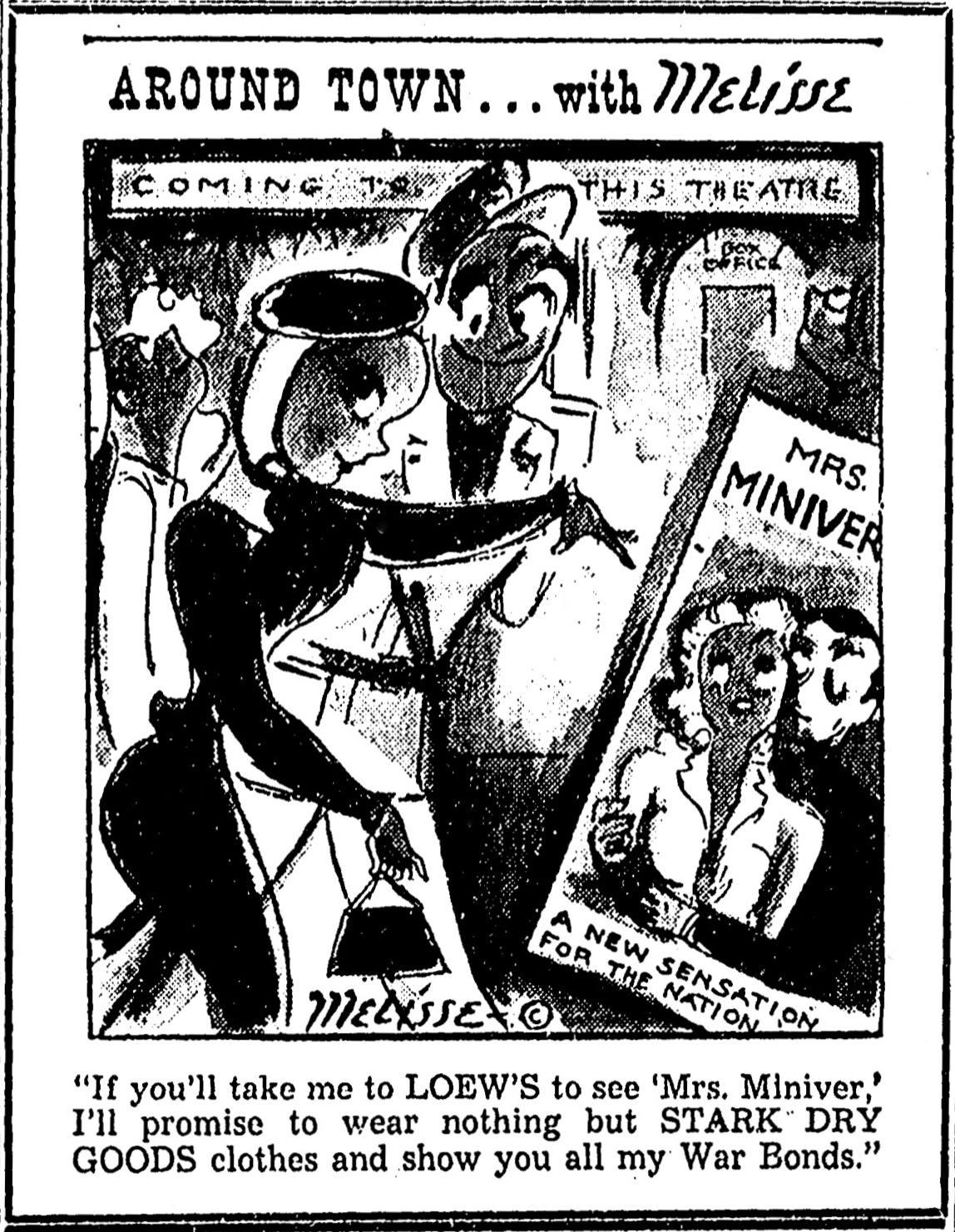 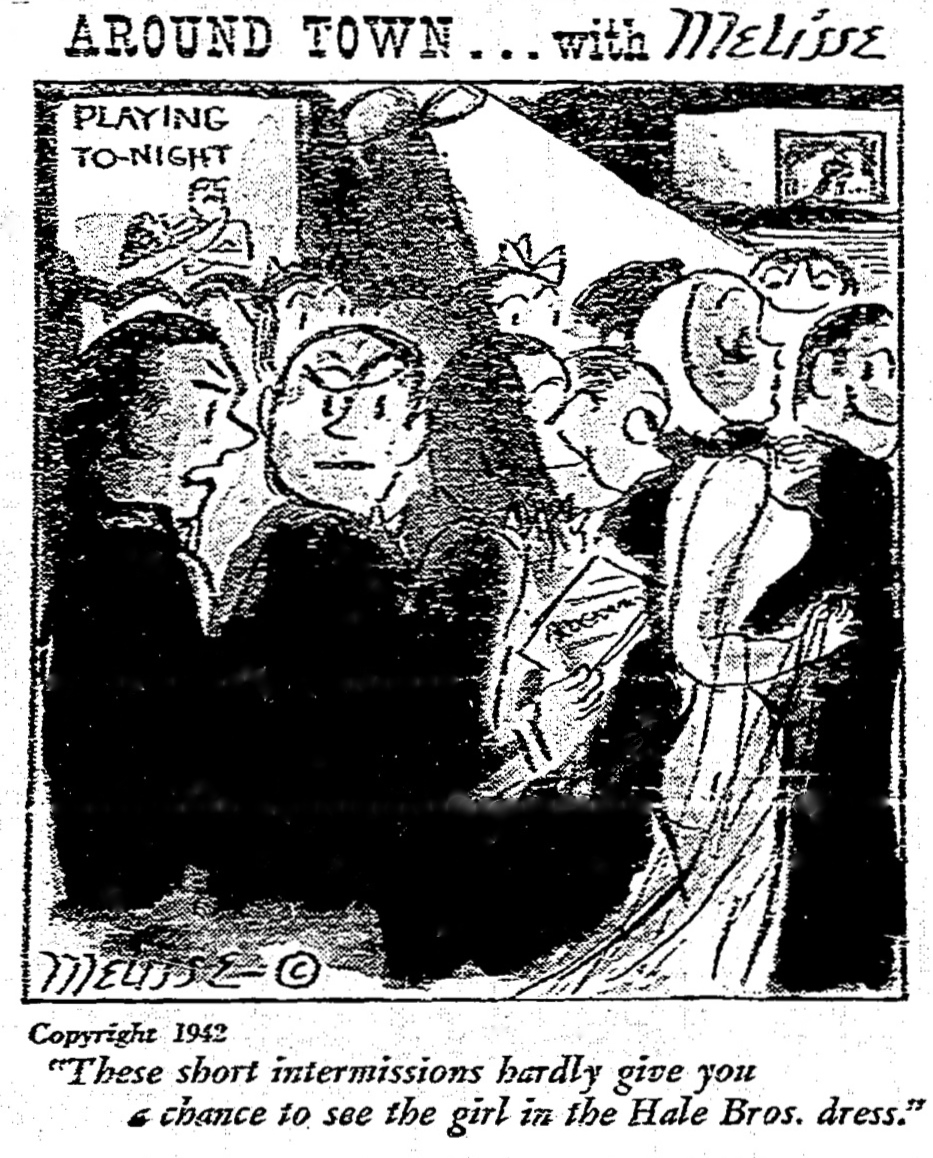 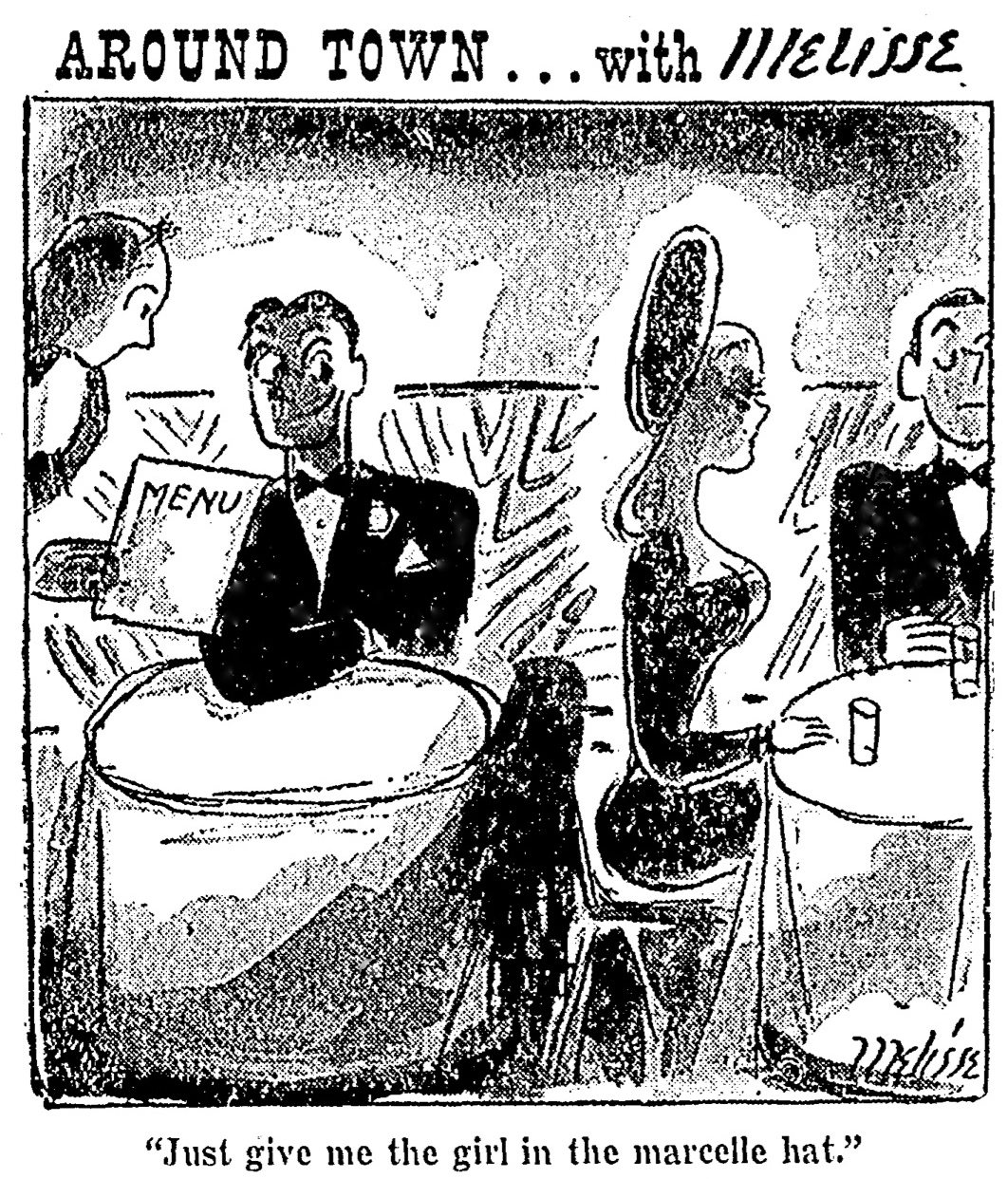 
What became of her after the 1940s is not known. Oppenheim passed away February 28, 1993, in Miami, Florida, according to the Social Security Death Index. An obituary has not been found.

Comments:
This law firm has dozens of original prints from Melisse... is there a market for them?

please contact:
paralegal AT Gelfmanassociates.com if you have any information on this.

Thanks for your informative page. I picked up a Melisse handkerchief at an auction and did not know what it was, just that the graphics on it are unusual.

The Library of Congress possesses a drawing in the Art Wood Collection, called The Adventures of Melisse. It was copyrighted by Melisse in 1950. Our particular strip is dated Oct. 22, 1950. On the back of the drawing is the inscription: Shot by News Engraving 8/25/50.

I have a lot of her articles and best of all I have a painting by her. I would love to learn more about it. If anyone can help me with that please contact me at karenbergeron 50@yahoo.com

I also have a very large painting by her. If you find out anything will you contact me at karenbergeron50@yahoo.com thank you Karen