Obscurity of the Day: Our Vaudeville Show 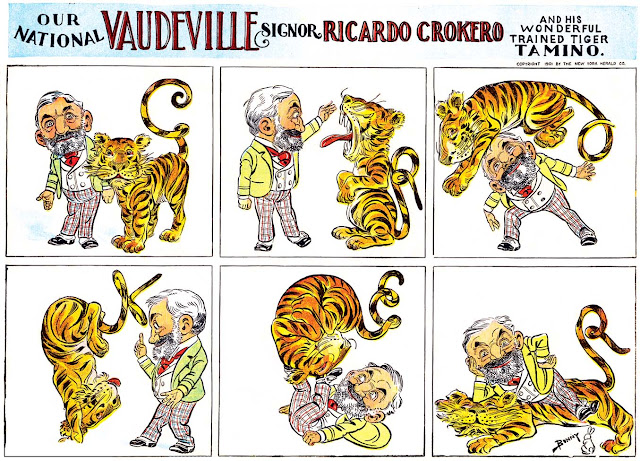 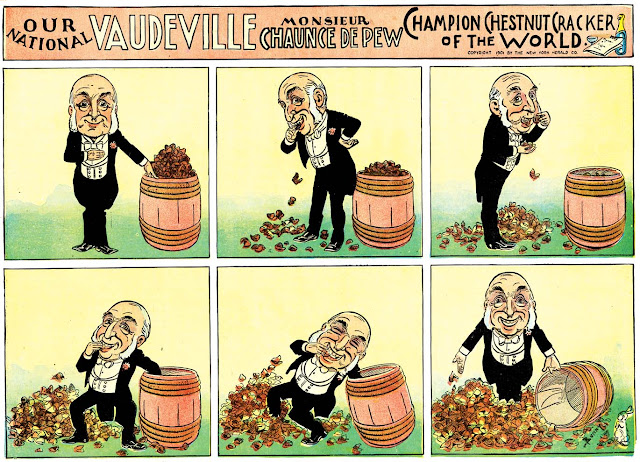 When we think of Carl 'Bunny' Schultze we typically think only of his ubiquitous Foxy Grandpa feature. And that's perfectly reasonable given that the strip ran, with a few interruptions, for well over twenty years. However, although Schultze is quite reasonably remembered as something of  a one-note cartoonist, early in his newspaper comic strip career he did try out a few other series. Of those, Our Vaudeville Show is particularly delightful.

In these samples above, which at a glance seem to be glimpses at rather oddball acts in a vaudeville show, there's a little more going on than meets the eye. In 1901, when these strips originally ran, the hidden meaning was not nearly as hard to unlock as today.

In the top example, we actually have Richard Croker, head of the infamous Tammany Hall political machine, showing how he can easily manipulate the symbol of the organization, the Tammany Tiger. The second features Chauncey DePew, United States Senator who was considered one of the premier speakers of the age -- apparently Schultze considered his oratorical skills somewhat on the hackneyed side -- full of chestnuts, that is.

There is some confusion about this series. Ken Barker's index of the New York Herald, where the series appeared, cites two different but very similar titles by 'Bunny' -- The Herald Vaudeville Show, which ran January 7 to June 3 1900, and Our Vaudeville Show, which ran September 23 to December 16 1900. I don't know if there was some important difference that made Barker consider these separate series, or if it was purely because of the long gap between installments in the summer of 1900. I haven't a single example in my collection, so I'm at a loss. What examples I do have, though, throw a second wrench into the works. The samples above, now retitled to Our National Vaudeville, are from February 1901, two months after the series was supposed to have ended.

The explanation of the unindexed 1901 series is simple -- these strips were in the Herald's magazine section, not in the comics section. So either the magazines were absent from the microfilm (not an unusual occurrence) or Barker simply missed them since they were not in the comics sections. But how long the National Vaudeville series went on I cannot say. Yet another item to add to my looong 'to be researched' list.

Comments:
The term "Chestnuts", as I interpret it in use in la Belle epoch was referring specifically to jokes, of which DePew was famous for. In fact, there's a Pulitzer comic section of,(If I remember correctly), 1899 which features a huge laughing head of Mr. Depew framed by some of his wittiest wittisisms.

I noticed the tiger's tail spells out "Croker" in the first example. Is there a similar trick in the second example? I can't see one (although I can't make out what's going on in the lower right-hand corner of the last panel), and six panels of somebody eating nuts seems thin, even with the chestnuts pun.