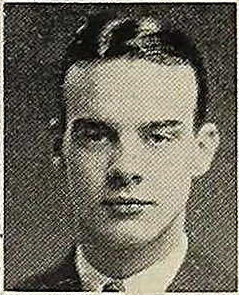 Renny McEvoy was born Reynold Thomas Wurnelle in Cleveland, Ohio, on January 22, 1905, according to a family tree at Ancestry.com. His parents, Arnold Benjamin Wurnelle and Mary Bradley Crotty, were both Ohio natives. His father’s surname was originally Wurm, which was changed sometime before 1910. “He was born in Sandusky and was an actor in vaudeville most of his life, retiring about 1940,” as stated in a profile at the Wurm Family blog. He was found in 1907 and 1908 listings in Variety and Billboard; An April 11, 1908, Billboard said: “Arnold B. Wurnelle, the acrobatic barrel jumper, writes that he is meeting success on his tour of the South, presenting his act on roller skates. He is at present playing a four weeks’ engagement at the Florida Ostrich Farm at Jacksonville.”

In the 1910 U.S. Federal Census, Renny, his mother (an actress) and younger brother, Harold, and maternal grandfather, Thomas W. Crotty, lived in Cleveland at 1567 East 41st Street. His father was not been found in the census. Some time later, his parents divorced. On September 10, 1918, his father signed his World War I draft card which said he lived in Denver, Colorado. He was a theatrical performer with the Western Vaudeville Managers Association, Majestic Theater Building, Chicago, Illinois, and named his mother as his nearest relative.

The 1920 census recorded Renny, his brother and paternal grandparents as part of his Uncle Harry and Aunt Bessie’s household. They resided in Fremont, Ohio at 527 Jackson Street. His mother was married to Chicago Tribune writer, Joseph Patrick McEvoy. The couple had a son, age 18 months, and daughter, age three-and-a-half. They resided in Deerfield, Illinois at 202 Linden Avenue. Renny attended Miami University in Oxford, Ohio. According to the 1928 school yearbook, Recensio, he was a sophomore; assistant on the Recensio staff; and member of the Sigma Chi fraternity. In 1929 he was a cheerleader; member of the dramatics club, Ye Merrie Players; vice-president of the Varsity Social club; and an organizer on the junior prom dance committee.

Renny was counted twice in the 1930 census. He lived with his divorced mother, recorded as “Mamye”, in Chicago, Illinois at 7106 Sheridan Road, where both were unemployed. In Elyria, Ohio, he was part of his Aunt Bessie’s household at 246 Eighth Street. Renny moved to Elyria and was listed in the 1931 city directory: “Wurnelle Reynold clk [clerk] J E Thatcher r[esidence] 1004 East av”.

It’s not known when Renny met his stepfather and changed his surname. The name changed, at least professionally, around 1932. The Miami Student (Miami University, Oxford, Ohio), March 5, 1948, profiled him and said: “…He left Miami, broke, in 1929, and hitchhiked to New York where he went into acting on Broadway…” However, his Broadway debut came later according to the Brooklyn Eagle (New York), February 24, 1951: “…A budding cartoonist, he made his Broadway debut in a musical, “Americana.” The book for the show was written by his father, who, however, was unaware for a considerable time that one of the minor roles was being played by his precocious offspring.” The Internet Broadway Database said there three Broadway productions of Americana, two of which were during his college days. The third one was in 1932. The Daily Star (Long Island City, New York), September 12, 1932, elaborated on Renny’s role in Americana:

When J.P. McEvoy’s new “America” [sic] opens in Philadelphia this Thursday, it will carry the hopes of more than one McEvoy with it. For Renny McEvoy, twenty-year old [sic: 27] son of J.P., is being introduced to Broadway via his father’s show.

Young McEvoy, besides having four bits of his own to do is acting as assistant stage manager and his first song will be heard in “America.” It is called “Bronx Cheer-Up.”

Young McEvoy had broadcast over WABC and stations in Cleveland. He can sing and he can dance but his real passion is song writing.

Another source is the St. Petersburg Times (Florida), December 2, 1943: “…McEvoy…has written continuity for the strip [Dixie Dugan] for 11 years…” The article suggests that in 1932 he started on the strip, which began October 21, 1929.

Announcement was made today that Renny McEvoy, who is known to Elyria by the name of Renny Wurnelle, will team with Bob Ballin as “Two Public Enemies” and will sing and patter for CBS starting Tuesday at 10:30 A.M. When in Elyria this young man lived with his aunt Mrs. H.E. [Bessie] Ranker. He was well known here for his work in the entertainment field with Dick Hancock.

His brother died April 30, 1935. In the mid-1930s, he married Pamela Shipley Sweeney, according to the family tree. The Coshocton Tribune (Ohio), April 6, 1938, published Charles B. Driscoll’s column “New York Day by Day” which said:

There are two McEvoy babies, eleven months apart in age. J.P., novelist, screen writer and playwright, and his wife, Peggy Santry, have gone to Hollywood, leaving the month-old Patricia, in care of a nurse at their Connecticut estate. Renny McEvoy, stepson of J.P., also a writer, is the father of a year-old girl named Pamela for her mother. Renny has given J.P. a lot of advice about baby-rearing, altho the elder McEvoy has two almost-grown children. J.P. accepts the advice gravely, as if it were from an expert instead of an enthusiast.

…For many years I have heard “Sweet Adeline” and “Old Black Joe” sung soulfully by a quartet composed of Charlie McAdam, I.C. Brenner, Ham Fisher and Renny McEvoy….McEvoy, actor, script writer and comic man, brings a note of youth and semi-professionalism to the group. He has even sung on the stage in musical comedies. The quartet, as now composed, recently had a record made, to entertain friends—or themselves.

Renny has not been found in the 1940 census. About his early life and performing career, the Brooklyn Eagle said:

Renny McEvoy, the cartoonist and son of the widely known author, J.P. McEvoy, was stage struck at a tender age and never got over it.

He took his first curtain bows as a cooing baby in the arms of his mother, the former May Wurnell [sic], vaudeville and musical comedy actress. Literally raised in the wardrobe trunk in his infant years, he was carried on the stage by his mother when she took her calls at the end of the night’s performance. One of her hit shows was “Peg O’ My Heart.”

…Renny’s career as a motion picture actor began [in 1944] when Cecil B. DeMille cast him as the comic and romantic sailor in “The Story of Dr. Wassell.” He has played parts of varying length and importance in nine other movies.

His movie experience was the springboard for the comic strips Hollywood Johnnie (1945 to 1948) and the Sunday topper, Movie Struck. Hollywood Johnnie was also known as Hollywood Merry-Go-Round; in 1947 the strip was retitled Screen Girl. In 1949 he wrote the Merrie Chase strip which was initially drawn by Carl Hubbell; it ended in November 1950. The Brooklyn Eagle profile also said:

The pay check he receives for the thespian chore is small in comparison to his income as a successful cartoonist. He acts because “the change is invigorating and refreshing,” he says. “I act in movies instead of playing golf. Often while doing a part I get ideas for new situations and characters for my cartoons.”

He has no trouble fitting his histrionic activities into his schedule for writing the continuity for two cartoon strips.

“I write three months ahead, so I can always find time to do a picture when one comes along,” he explains. “Besides, I never could work on a cartoon in an office. When I started doing little things on the stage 12 years ago, I used to jot down ideas for Dixie Dugan in the dressing room, using lipstick or an eyebrow pencil to write with.”

Renny created the movie star character named “Reynold Wurnell” who was rumored to be engaged to Dixie Dugan. The storyline began September 17, 1949 and Wurnell was first mentioned September 22. The story continued into 1950. The strip ended October 8, 1966.

His skill, trapping coyotes in the Hollywood Hills, was explained in Popular Science, December 1961 (photo on page 68); how he trapped the coyotes is on page 198. As his movie roles decreased, television beckoned and he found parts from the late 1950s to the late 1960s. His screen credits are here.

His father died December 22, 1969. When his mother died is not known. According to the California Death Index at Ancestry.com, his wife passed away November 9, 1983 in San Diego, California. Renny passed away April 5, 1987, in El Centro, California, according to Find a Grave.

Comments:
Renny was a great friend and co worker. I was eighteen and we worked at the L.A Animal Shelter together. I went to his house after work one day and he introducedm me to iced coffee. He was doing small acting parts at the time. This was about the mid 1960s. Mark Gentry P. S. I still love iced coffee with cream and sugar just like Renny

He was a wonderful father often taking me fishing. While I sat in the boat fishing he would often be writing the continuity for Dixie Dugan.

He drew my mom into one of his Hollywood Johnnie comic strips and that ultimately landed her an agent Lee Stewart. She did a couple of stage productions but marriage and children ended her budding career. But still...she was in the "funny papers" thanks to Mr. McEvoy. :)