Obscurity of the Day: The Whole Blooming Family 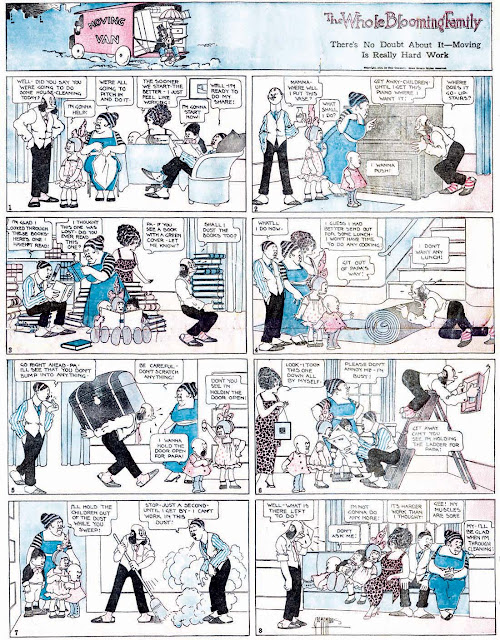 When George McManus made the jump from the Pulitzer organization to Hearst in 1912, he, like others who had trod the same path, took his most popular feature with him. The Newlyweds and their Baby, which had been running since 1906 in Pulitzer's World, was brought over to Hearst as Their Only Child. As with other successful features that jumped syndicates, the World kept the original name, and assigned a new cartoonist (Albert Carmichael) to continue it.

Unlike other similar situations however, there seems to have been no litigation regarding the ownership of The Newlyweds. Perhaps by 1912 Pulitzer and Hearst had gone through the kabuki dance enough times that in the case of McManus' feature they couldn't be bothered to waste legal fees, since they had a pretty good idea of how things would work out.

McManus, however, must have chafed over the fact that he was in weekly direct competition with another Newlyweds series. It certainly couldn't have helped matters that Albert Carmichael was a gifted cartoonist as well as an accomplished imitator of McManus -- one might even say he improved on McManus (in fact I did, at length).

When McManus decided to drop Their Only Child in early 1916, one must wonder why he did it. Was he just tired of maintaining a series he had been working with a for a decade? Did the competition finally make him wave the white flag? Did the Hearst higher-ups make the decision for him? Was there some legal wrangling that ended the series? Or did he need the space for a great new strip idea?

I can't speak to the other possibilities with any certainty, but I can say that the "great new strip idea"certainly wasn't the case. On February 13 1916, the week after his last Their Only Child strip ran in the Hearst papers, The Whole Blooming Family debuted, an effort of no great originality.

The Whole Blooming Family brings us into the lives of a family of slightly repellant soft-headed idiots. Father is our protagonist, the only member of the family with any brains or wit, and he only looks good in comparison to the rest of his loser family. As domestic comedy it just didn't really have anything special to recommend it, and no characters were especially interesting or memorable.

Thankfully, McManus sensed pretty quickly that he had a stinker on his hands, and the series was dropped after just eight months, on October 22, in favor of a new series, Rosie's Beau.

Perhaps the only really interesting thing about The Whole Blooming Family is that it is tied, at least by title, to an earlier fad. Back around 1905-06, there was a spate of merchandise and recordings featuring The Whole Dam Family -- a film (note that the linked video is not the complete film), a record, many postcards (some with very nice cartoon art, though sadly none at this link are signed), and who knows what else. Obviously this is where McManus got his title, and perhaps more of the concept for the strip.The Whole Dam Family, a bit of wordplay in which references are made to the Dam father, the Dam housekeeper and so on, was somewhat risque in a day when even a "drat" said with too much venom could make some women faint dead away with horror. The gag, Cole Johnson tells me, is a lot older -- he can trace it back to 1883 at least (Atlanta Constitution, May 3 1883) -- but for some reason it really went viral in 1905-06.

McManus certainly had this in mind with his title. One has to wonder if he tried to talk the Hearst folks into letting him use the name Dam, and was forced to settle for 'blooming', a total dud by comparison.

Just for the record, a very obscure cartoonist working for a very obscure syndicate did resurrect The Whole Dam Family, complete with shocking name, a while later. But that's the subject for another day.

Comments:
Amazing to think that the word "dam" could have ever been remotely controversial. It's stories like these that make one grateful for the internet where cyanide and happiness - a comic regularly featuring light-hearted murders, kidnappings and probably some rapes - can survive free of controversy. Of course, someone has to go to the page specifically to see these comics and can blame only themselves for seeing them (not so when flipping through a paper).