Like To Be Cartoonist? Sit Down, Fiddle Awhile And Wait Very Patiently For A 'Gag' To Pop Out


Reamer Keller, Portsmouth Gift To The Pen-And-Ink Brigade, Tells How

Cartoonists who draw for newspapers and magazine don't wander around the streets, looking for something funny in everything they see. 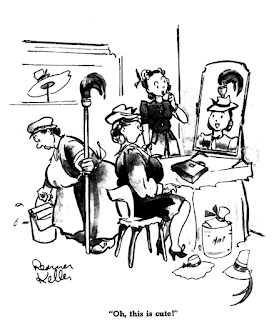 They don't wake up in the middle of the night, inflamed with an idea to make people laugh.

They don't dive into their coat pockets for pencil and pad every time they hear a joke.

Take the word of Reamer Keller, who's one of them, that the cartoonists are just quiet folks with regular habits, trying to make a living by tickling the nation's funnybone.

But when vacation time rolls around, he always heads for Portsmouth and home.

This year he stayed a week, arriving Monday and leaving Saturday.

At his home at 1919 Baird avenue, he talked about this business of manufacturing chuckles with pen and ink. His skill as a cartoonist -- he calls them "gags", not cartoons -- has earned his living for quite a few years. 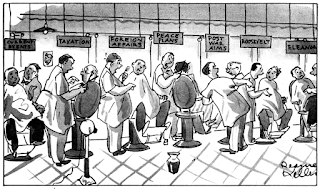 Since 1934, his income also has supported his wife, a pleasant-featured Brooklyn girl, and two children.

Mr. Keller works in the manner preferred by most cartoonists -- free lance.

Two days a week, he draws. The rest of the time is devoted to selling his products -- visiting personally in New York city the newspaper and magazine offices with which he has established a trade, mailing to other parts of the country and other parts of the world the rest of his output.

In the two days at his drawing board, he figures he turns out 50 cartoons each week.

He insists that when he sits down at his board with a blank sheet of ordinary typewriter paper jacked in front of him, he doesn't have the slightest idea what he wants to draw.

He says he starts off aimlessly, maybe outlining a desk off at one side of the paper. Then he might sketch a figure behind the desk, or in front of it, or somewhere near it. Then another figure or some object of furniture will be inserted. 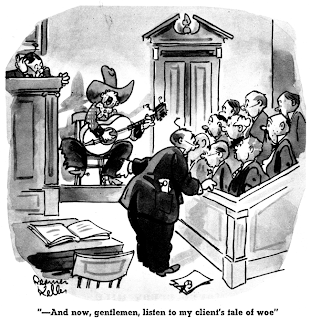 All this he calls "fiddling" -- fishing for an idea upon which to build a "gag". Presently something suggests itself. He goes to work in earnest and in a few minutes the cartoon appears full bodied.

Beneath he prints the caption, the "gag line" which is supposed to get the laugh (a lot of times they don't, he admits), and then he starts the stack which keeps growing as ideas incubate and come to life on paper.

He says it's not especially hard. You don't bite your nails or pace the floor. You just "fiddle" around and eventually the mind responds.

The stack finished, he bundles his work under his arm and starts the rounds of the offices. Some of his creations find their way into magazines which demand high-grade stuff; widely known humor publications like Judge, College Humor and Collier's print quite a few. So does Liberty.

He reaches newspapers, including The Times, through King Features Syndicate, a nationwide organization whose business is selling comics and other features to newspapers.

Foreign countries see his products. He mails cartoons to England, France, Sweden and countries as far off as India. The captions are translated into native languages, and the same brand of humor that lights up an American face in a smile also amuses a French laborer, relaxing over his evening wine.

The cartoons come from a hand never trained in art school. Mr. Keller wanted to be an architect after he finished Portsmouth High school. He enrolled in an architecture course at the University of Cincinnati.

His comical sketches decorated the pages of the school's publication, but he drew simply as a lark, all the while pursuing his studies in architecture.

Even when he went to Ohio State university for further study, a career in cartoons wasn't on his mind. There, too, he contributed to the school's magazine but he still was just exercising a sense of humor which makes him exceptionally pleasant to talk with. 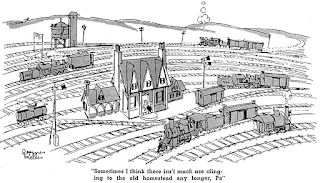 He stumbled into cartooning after he left school. A nonsensical tidbit he showed a sports editor of a Columbus newspaper was so well liked that the editor offered to buy it.

He still remembers the cartoon -- a couple of feminine prize fighters puffing in their corners between rounds and one of them is saying to her trainer: "Never mind the rub-down -- just daub a little rouge over this black eye!"

He got a job on the paper, drawing, working in the art department, developing his technique.

After a while he quit and made an extensive expedition through the country, traveling with a companion by any means at hand.

He came back with the firm determination to try his luck in New York city. He went east in 1920 and he's been there ever since.

Even if it isn't the safest job in the world -- editors still don't go into ecstacy over everything he turns out -- he likes it because it permits an independent life.

His investment is ridiculously low. Two bottles of ink a month are sufficient. The typewriter paper comes in large sheafs for a dime. And for the last five years he has used the same pen points, not because they're expensive but because he's learned to work expertly and swiftly with that particular point.

Comments:
Keller is one of the best. Thanks so much for this.

Hello, do you know if Reamer Keller did any realistic advertising art in the 1950s? I have an ad with a painted illustration signed R. Keller that looks like his signature.

Almost certainly not Reamer Keller, unless the painted illo is cartoony. He did not work in a realistic style commercially.