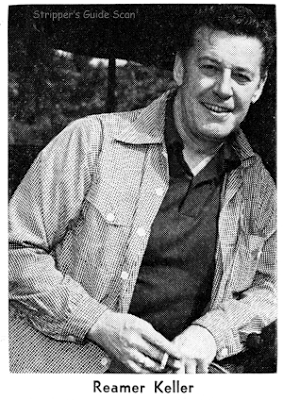 Laughs for readers are pre­scribed and provided by a new "miracle drug"—a newspaper cartoon panel concocted for the New Year of 1966.

With Congress enacting Medi­care legislation and with tele­vision broadcasting soap operas about medical men, interest in the medical world has increased to the point where it was deemed a timely background for a new newspaper gag panel.

Sample Captions
To give an idea of the funny flavor of the coming "Medicare" panel, here are some sample captions under the bold-stroke cartoons:
"It's time you started taking out something besides the nurses, Pendergast!"
"She has complete confidence in you. I told her you had a rabbit's foot on your hip."
"He has a real sympathetic cluck."
"I'll be glad when 307 is well enough to get his face slapped!"
"Got five girls' names ready?"
"No, Mr. Kovacs—I don't think bourbon is a very good substitute for coffee."
"You've tried every an­nouncer on tv! Please try a doctor!"
"Quick! Do you have anything on brain surgery made easy?"
"Carter's drug store? This is an emergency—the doc­tor has run out of lollipops and balloons!"
"I like the way he handles a stethoscope—it doesn't tickle."
"You need lots of fresh air and sunshine. When you get home get rid of your telephone."
"The house isn't the same with­out you, dear. The silence is deafening!"
"Good news, dear! I've found an obstetrician who gives stamps!"

Comic's Creator
The creator of the new comic panel, Keamer Keller, is world renowned in the field of car­tooning. During the last 30 years, Keller cartoons have been seen in most major magazines in the U.S. and Europe and in other parts of the world.

More than 22,000 of his car­toons have appeared in every conceivable type of magazine and he has become somewhat of a legend in his own time. His work appears regularly in McCalls, Esquire, Saturday Eve­ning Post, New Yorker, Play­boy, for example.

Some of his funniest cartoons dealt with the field of medicine and the new panel developed from this background. 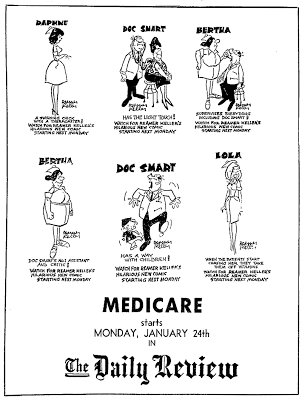 Idea Is Born
"I found that invariably whenever I drew a cartoon about doctors, nurses and their patients there would be an im­mediate reaction," explained Mr. Keller. "I always was de­luged with requests for the original drawing. To an artist this is positive proof that you have produced a good, funny cartoon—one that has been right on target."

Throughout the country many Keller original cartoons hang in doctors' offices, are pinned to hospital bulletin boards and proudly displayed by members of the medical profession. Mr. Keller hopes for the same warm reception for his new panel.

Meet Mr. Keller
Reamer Keller was born in Shenandoah, Va., but moved at an early age with his parents to Portsmouth, Ohio. He worked for the Columbus Citizen and Ohio State Journal. After four years of architectural studies at the University of Cincinnati and Ohio State University, he headed for New York to follow his first and enduring love— cartooning.

He worked for a year on the old Financial News and the New York World-Telegram and then began selling cartoons to Life, Judge, Colliers and other maga­zines. He also worked for a number of advertising agencies.
He now lives with his wife and two children in Atlantic Highlands, N. J., surrounded by pets of many sizes and kinds.

Tomorrow -- Obscurity of the Day: Medicare

Comments:
I don't remembered Medicare, but, I do know it (From the now-defunct Oklahoma City Times) mostly under another name, Doc Smart.