Frank Herman Moser was born in Oketo, Kansas, on May 27, 1886. His birthplace was identified in the New York Times, October 2, 1964, and his World War I draft card had his full name and birth date. In the 1895 Kansas State Census, his German-born mother, Alviena, was the head of the household. Of the seven children, he and his twin sister, Martha, were the youngest. They lived in Marysville, Kansas. The National Cyclopaedia of American Biography (1970) said his father’s name was John Jacob, a farmer.

The 1900 U.S. Federal Census recorded the family of six in Marysville on Alston Street. (The family name was misspelled “Mosher”.) His oldest brother was the breadwinner. All seven siblings were together in the 1905 Kansas State Census; apparently their mother has passed away before then. Regarding his education, art training and early work, the National Cyclopaedia of American Biography said:

...After receiving his preliminary education at public schools in Marysville, Kans., Frank H. Moser studied in 1907–08 at the Albert T. Reid Art School, Topeka, Kans., during 1908–10 at the Cumming School of Art, Des Moines, Iowa, and for a time after 1912 at the Art Students League of New York and the National Academy of Design, the last two in New York City. While attending school in Des Moines, he worked with J.N Ding (Jay N. Darling) cartoonist for the Register, as part-time illustrator and cartoonist, doing general utility sketch assignments. In 1910, when Ding left the paper, Moser replaced him and drew a daily cartoon for two years. He moved to New York City in 1912 and while attending art school had work illustrating for the New York Globe a daily story, “In Our School,” which ran for four years.... 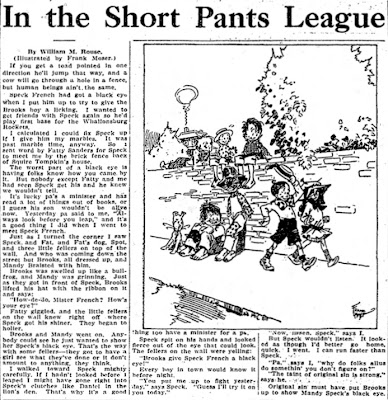 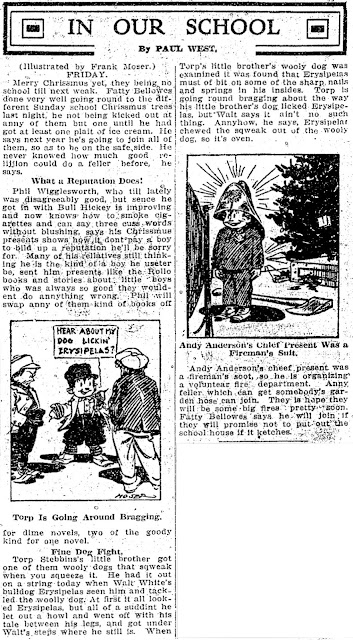 A profile of Paul Terry appeared in the Yonkers Statesman (New York), June 20, 1931, and about Moser it said: “…Moser, was illustrating the Sunday supplement of the New York Press….Among the strips created by the quiet, pleasant Moser was a Sunday series known as Fan Fanny in Sport, a cartoonization of a man, his wife and their dog….” [Allan's note: I did not find any comic strip series by Moser in my indexing of the New York Press newspaper]. According to American Newspaper Comics (2012), he produced the panel, Summer Kids, which was distributed by Associated Newspapers in 1914.

He has not been found in the 1910 census. A family tree at Ancestry.com said he married “Anna Augusta Margareta Hård (Nilsson)” in August 1914. The couple and their four-month-old daughter, Marjorie, lived in Manhattan, New York City at 171 Audubon Avenue, according to the 1915 New York State Census. He was a newspaper artist. In The Educational Screen, October 1939, Arthur Edwin Erows wrote:

…In 1915 he had done a series of animation subjects for the Edison Company in New York, and a year later he had founded the animation department for the International News Service in the same city, animating the first “Krazy Kat,” “Bringing Up Father,” “Jerry on the Job,” “Happy Hooligan” and “Little Jimmy,” all then current comic strip favorites in the Hearst newspapers. He was with [John] Bray during the Paramount period. When he joined Terry in 1919 it was to make “Aesop’s Fables” until those amusing drolleries had reached the astounding number of 430 separate releases….

The Times said he moved to Hastings, New York in 1916. Moser signed his World War I draft card September 12, 1918. His address was 37 Hollywood Drive in Hastings. He was a cartoonist employed at the International Film Service Company, 727 7th Avenue, New York City. His description was medium height and build with gray eyes and light colored hair. In the Student’s Art Magazine, June-July 1919, Bert Green shared his observation of Moser’s skills: “The most rapid animator in the game is Frank Moser. Moser literally shakes them out of a hat. I have seen Moser take a scenario of ‘Happy Hooligan’ and in thirty days hand you a pile of between two and three thousand drawings that you couldn’t jump over and live through it. Yes, and catch the 5:15 for Hastings ‘nine times running.’ ”

His home address was the same in the 1920 census. New to the household was a son, John. He continued work as an artist for a film company. The Dobbs Ferry Register (New York), September 3, 1920, reported the vaudeville benefit which included Moser:

…One of the most unique numbers is Frank H. Moser, in Animated Cartoons—The Secret Exposed. Mr. Moser is the creator of the well-known animated cartoon, “Bud and Susie,” who, by the way, are better known in River View Manor by their right names, John and Marjorie Moser. Mr. Moser will appear in person and demonstrate how it is made, drawing the pictures right on the stage. This has never before been shown.

According to the Register, September 21, 1928, Moser was treasurer of the Hudson River Valley Art Association; he and his wife accepted the invitation to become charter members in the association. In 1929, he and Paul Terry co-founded a company to produce animated cartoons. A photo of the Terrytoons staff is here.

The July 26, 1929, Register noted a visit by his twin sister, Martha, who was a school teacher in San Francisco. Six weeks later, his daughter passed away at home; the cause was tubercular meningitis, as reported in the Hastings News, September 6. Three months later, tragedy struck again, when Moser came home and found his wife dead, a suicide of gas poisoning. The Register, December 13, 1929, said she was despondent over the death of her daughter, who would have been fifteen on the ninth.

Moser, his son and a servant were recorded in the 1930 census at the same address. The News, September 9, 1932, reported his marriage to Isabel Fairclough. The second half of the decade found him in court. The Daily Argus (Mount Vernon, New York), December 1, 1936, reported Moser’s lawsuit against Terry:

White Plains, Dec. 1.—Frank H. Moser of 37 Hollywood Avenue, Hastings, well known animated cartoon artist, charged in affidavits today that his former bosom friend and fellow cartoonist, Paul H. Terry of Larchmont, persuaded him by fraud and deceit to sell for $24,200 his 50–50 share in their highly profitable Terrytoons, Inc., then feted him at a testimonial dinner marking severance of their business relationship last March 2.

Terrytoons, Inc., has its studio at the Pershing Square building in New Rochelle.

Moser, who is forty, is suing in Supreme Court to regain his half share in the corporation or, in the alternative, for $500,000 damages. He names as defendants Terry, whose home is at 115 Beach Avenue, Larchmont; William M. Weiss, who was their secretary-treasurer; Terrytoons, Inc.; The Moser and Terry Corporation, which was succeeded by Terrytoons, Inc., and Earl W. Hammons, president of Educational Films Corporation of America, distributors of the Terry and Moser animated cartoons.

Moser lost his suit as reported in the Herald Statesman (Yonkers, New York), July 12, 1937. His animation career is detailed in Who’s Who in Animated Cartoons (2006). His involvement in an auto accident was published in the Niagara Falls Gazette (New York), May 5, 1938:

Hauptmann Child Injured by Auto
New York, May 5 (AP)—Manfred Hauptmann, five-year-old son of Bruno Richard Hauptmann, was treated today for a double leg fracture suffered when he was struck by an automobile.

The boy, playing on a Bronx street yesterday, darted into the path of a car driven by Frank H. Moser, of Hastings-on-Hudson. His right leg was fractured above and below the knee, Fordham hospital physicians said, and his cheek and ear were cut.

His mother, Mrs. Anna Hauptmann, widow of the man executed for the slaying of the Lindbergh baby, now uses her maiden name—Schoeffler.

Moser’s attorney called the award excessive and asked that it be set aside. Justice William F. Love reserved decision.

Mrs. Hauptmann, whose husband was electrocuted in 1936, charged Moser with negligence. The cartoonist’s counsel said the accident was unavoidable.

The verdict was returned in the Bronx county courthouse where Hauptmann first was arraigned on charge of kidnapping the infant son of Col. Charles A. Lindbergh.

In the 1940 census, Moser and his family remained at the same address. He was an animation cartoonist in the movie industry, and his highest level of education was four years of high school. A filmography is here. He continued painting and exhibited in galleries in New York and Westchester County. He was a member of the Allied Artists of America, the American Watercolor Society and the Salmagundi Club. His twin sister passed away September 29, 1958, according to the California Death Index.

Moser passed away September 30, 1964, in Dobbs Ferry, New York. Many sources said he died October 1. The Times reported his death October 2 and the first paragraph said:

Dobbs Ferry, N.Y., Oct. 1—Frank H. Moser, an artist who was co-founder and producer of Terrytoons, the animated cartoon films, died yesterday in Dobbs Ferry Hospital at the age of 78. He lived at 37 Hollywood Drive, Hastings-on-Hudson.

Frank Moser Dies
Word has been received of the sudden death of Frank Moser, noted cartoonist and artist, at Hastings-on-Hudson, on Sept. 30. Mr. and Mrs. Moser resided in the home now occupied by Mrs. Perry Kirby for several years. He was a contributor to the “Terrytoons” film cartoon series. Services were held Saturday at Hastings-on-Hudson with interment in Sleepy Hollow Cemetery. 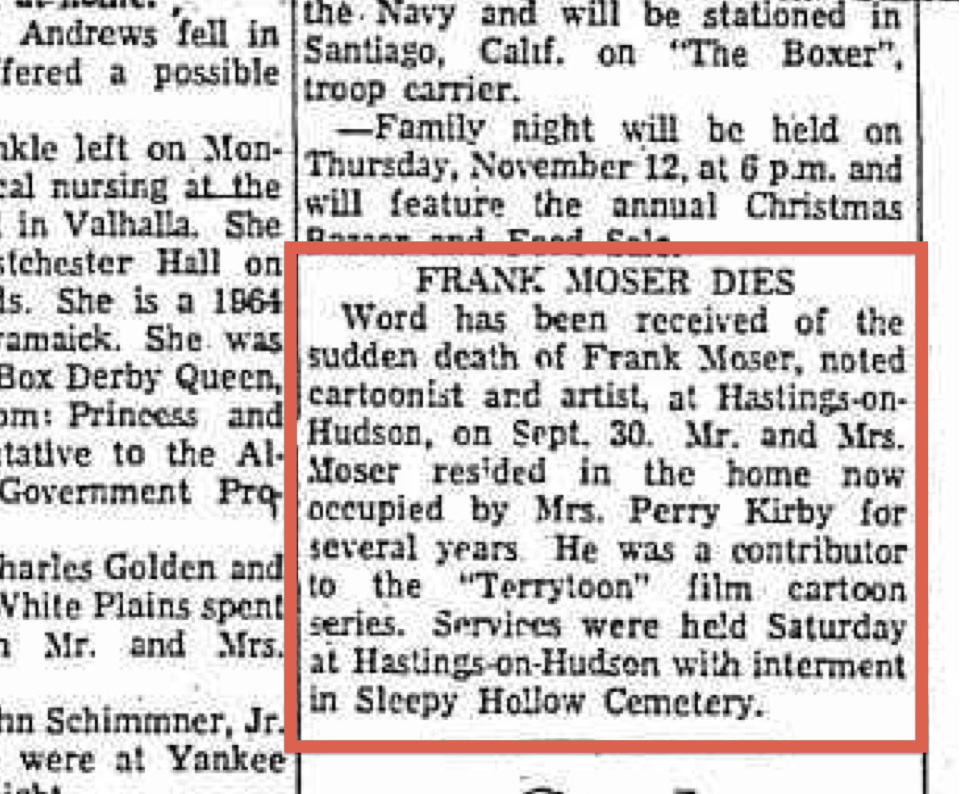 And the National Cyclopaedia of American Biography had the same date.

Comments:
Hello, Allan----For many years, Paul Terry had promised his cartoon directors that as a reward for their loyalty, they would eventually all retire together, and the profits from selling TERRYTOONS would be shared between them. In the 1950's, Terry secretly sold the company and his film library to CBS for a million dollars. The old crew didn't find out until Terry was leaving the place for the last time. His hurt (and gullible) team asked him what was going on. "None of your business", Terry arrogantly said, and never saw them again. My sympathies go to Mr. Moser, whom shlockmeister Terry gave the fast shake all those years earlier.

Allen--Moser's Fan, Fanny and Sport series appeared in the Des Moines Register and Leader in 1911-1912 and consisted of ten cartoons published intermittently in the sports section chronicling the local baseball situation.

Hi Ralph --
Thanks for that! Might you have any samples to share, or be able to provide the specific start and end dates of the series?