Thomas Benjamin Faucett was born in Idaville, Tennessee on February 22, 1884. His birthplace was found in his father’s profile in Gibson County, Past and Present (1961), and his birth date was on his World War I draft card. In the 1900 U.S. Federal Census, he was the oldest of five children born to John, a physician, and Everette. His birth was recorded as “February 1883.” They lived in Trenton, Tennessee. In 1902 Faucett was enrolled in the St. Louis School of Fine Arts at Washington University. According to Tennessee State Marriages, 1780-2002, at Ancestry.com, he and Iris M. Seat married on November 1, 1906. The St. Louis City Directory 1909 had this listing: “Faucett T Benjamin editor World Color Printing Co 811 N 19th r 3918A Botanical av”. He had a single turn, November 14, 1909, on Bart Bartholomew’s Practical Lessons in Drawing. 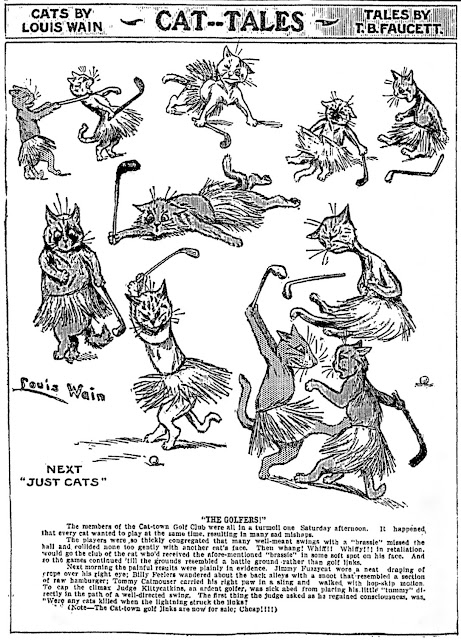 In the 1910 census, Faucett, his wife, daughter and brother-in-law were recorded in St. Louis at 3918 Botanical Avenue. He was a newspaper manager who wrote the text for Cat Tales (1910), which was drawn by English artist, Louis Wain. The 1916 city directory had two listings for Faucett:

According to Gibson County, Past and Present, both of his parents passed away in 1913. In 1917 he lived at 2209 Lawrence and continued an art editor. Faucett signed his World War I draft card on September 12, 1918. His address was the same but his occupation was managing editor at World Color Printing. At some point he moved to New York City. In 1918 his Bedtime Pencil Pictures began to appear. In 1919, for the Brooklyn Daily Eagle, he contributed “Kinky Words Found in Your Dictionary” which included abaction, babu, epizoon, fantoccini, genethliac, skilligallee, theriac and zymurgy. The Editor, November 25, 1919, published his article, “Playing the Syndicating Game.”

The 1920 census recorded him in Brooklyn, New York at 158 Parkside Avenue (formerly Robinson Street). He was a magazine writer who worked at home. He wrote a number of articles for Popular Mechanics and other periodicals. How long he stayed in New York and when he moved to Nashville, Tennessee are not known. A 1924 Nashville City Directory listed him as a writer at 2319 Highland Avenue. He wrote and illustrated four books: Brainy Berries: A Night in Crystal Cave; Folksy Fruits: Anthropomorphic Adventures in Opal Orchard; Frolicsome Flowers They See The Wonderful Rajah Rug; and Venturous Vegetables at the Frolic Grounds, which were published in 1924.

In 1930 he remained in Nashville but at different address, 2502 Ashwood. He was a newspaper manager and his household included his wife, daughter, son-in-law and granddaughter. The 1931 city directory said he was the advertising manager of the Labor Advocate.

Faucett was the publisher of a labor newspaper according to the 1940 census. He and his wife lived at 2202 18th Avenue South in Nashville. Over the years he worked at other Nashville newspapers. The 1947 city directory listed him at 1519 Compton Avenue and as editor of Labor News. In the 1955 and 1959 directories he resided at 116 Mayfair Road and was editor of Trades & Labor News.

Sometime in the 1960s he moved to Florida. Editor & Publisher, February 5, 1966, noted Faucett’s passing: “T. Benjamin Faucett, 81, feature writer for the Nashville Banner, author of children’s books, Jan. 25.” He was buried at Daytona Memorial Park. His wife passed away in 1988.