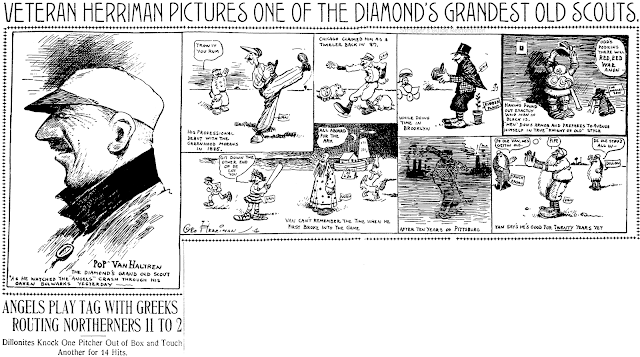 Thursday, April 9 1908 -- Herriman decides to profile one of the Hen Berry's gang o' nine today, after watching the Angels plaster Oakland 11 to 2 in a sloppily played contest. He chooses George Van Haltren, who had a long and impressive career in the majors before 'retiring' to the Pacific Coast League. Herriman has one fact askew here -- Van Haltren actually played for the New York Giants for a decade -- with the Pittsburg Pirates he spent only two seasons. Here's a good, if short, recounting of his career. It's a bit surprising to me I've never heard of this fellow, who still holds the National League record for consecutive games reaching base safely -- 60 games!