Harry Frank Sahle was born in Cleveland, Ohio in 1912. His full name was found at an Ancestry.com family tree which has a short remembrance by his son, Robert.

Sahle’s parents, Edward and Sarah (Jewell), married January 25, 1912 according to the Cuyahoga County, Ohio, Marriage Records and Indexes, 1810-1973 at Ancestry.com. Five years later, his father, a widower, signed his World War I draft card on June 5, 1917.

In the 1920 U.S. Federal Census, which was enumerated in January, Sahle was seven years old, the oldest of two children who lived with their paternal grandparent’s family in Cleveland at 937 Maud Street. His father was a machinist at an auto factory. Sahle was a member of the “Seckatary Hawkins Club”. He submitted a drawing for the January 9, 1927 contest, which was announced in the Cleveland Plain Dealer Sunday Magazine (below). The January 23 issue announced the winners: “…Three other prizes, of $1 each, have been awarded to…Harry F. Sahle, 14, of 937 Maud st. N.E. Cleveland, for a drawing….” 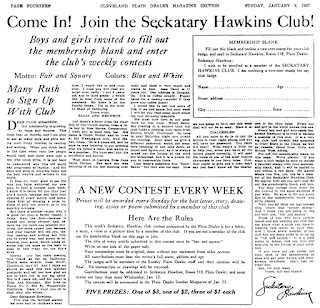 The Plain Dealer, September 23, 1950, said, “…After attending East High School, he worked for the Cleveland News as a cartoonist….” Sahle has not been found in the 1930 census. His father had remarried and lived in the Bronx, New York, with his wife and stepson.

In the 1940 census Sahle lived with his parents in the Bronx at 2893 Wellman Avenue. The Plain Dealer said: “…Later he went to New York. During World War II he was an artist for the federal government….”

In New York he found work in the comic book industry; his credits are at the Grand Comics Database. Lambiek Comiclopedia has samples of his art. His Candy comic books can be viewed at Fury Comics. Who's Who of American Comic Books 1928–1999 has an overview of his career. Who’s Who and Wikipedia said Sahle used the pen name “Jewell”; it was his mother’s maiden name, as noted earlier.

According to Fury Comics, “Harry Sahle, along with writer Elmer Groggin, also produced a Candy comic strip, first syndicated by the Chicago Times Syndicate on October 2, 1944….” In Summer 1949, he was a teacher at the Salwen School of Art in Cleveland. 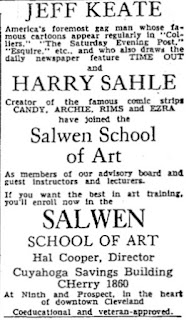 
Sahle passed away September 22, 1950, in New York. His death was reported the following day in the Plain Dealer: “Harry F. Sahle, a native Clevelander and the creator of the cartoon strip Candy, [and comic book characters] Hickory and Rines [sic: Rims], died yesterday in a New York hospital, friends here learned last night. He was 38. Yesterday was his 10th wedding anniversary….His wife Caroline, a son, Robert G. and a sister, Mrs. LaVerne Scharlott of Cleveland, survive him. Services and cremation will be held Monday in Hawthorne, N.Y.”

Comments:
Great site. A couple of Sahle questions, what do you suppose was the cause of such a young death (at 38) and it appears he left comics for less than 1 year between Archie and Quality comics - seems too short of a time to have joined the military. Any ideas?