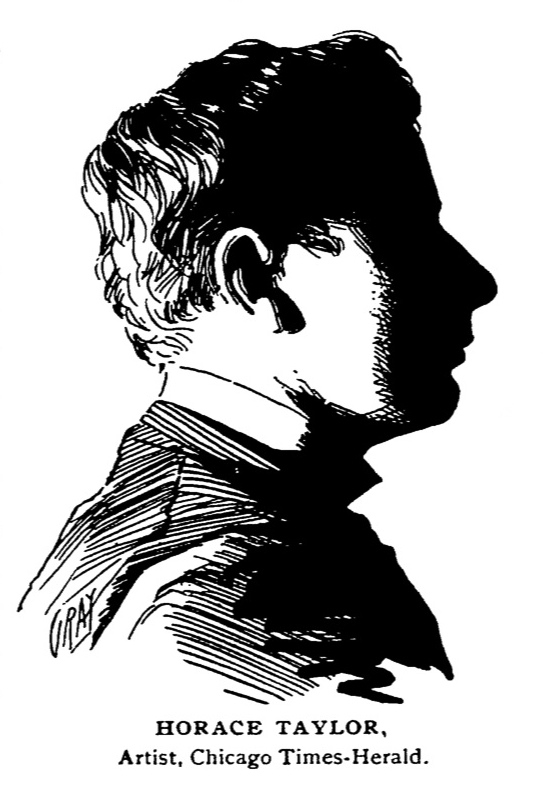 Horace Taylor was born in Nokomis, Illinois on October 7, 1865. His birthplace was mentioned in the Inland Printer, April 1896, and his birth date was in the Alumni Record of the University of Illinois at Urbana (1906).

The 1870 U.S. Federal Census recorded the Taylor family in Greenwood, Illinois. He was the youngest of five children born to George, a farmer, and Margaret. In 1880 they resided in Nokomis, Illinois, where Taylor’s father was a banker.

Taylor was profiled in the Inland Printer:

No artist in the country is more thoroughly acquainted with, and proficient in, every branch of the newspaper illustration than is Horace Taylor. He was born in Nokomis, Illinois in 1865, where he received his elementary education and became familiar with those homely country characters which of late he has been so successful in depicting. From 1882 until 1887 he was a student in the University of Illinois, the last two years of which time he acted as assistant instructor in perspective, of which subtle science he is a master. On graduating from the university, in 1887, he came to Chicago, and after a short set-to with the designing of labels for tomato cans and cracker boxes, he joined the art staff of the Daily News, now the Record, under the veteran and able Schmedtgen. In less than a year, however, he went to the Chicago Herald, with which paper he has worked steadily through all its changes of management and name, up to the present time, excepting a few months, some years since, when he and Tom Powers deserted to adorn with colored cartoons the pages of the short-lived but brilliant Light, that failed.

Taylor’s works that have attracted most attention have been those appearing in series or groups, such as the “holidays” and “seasons,” shown about two years ago; then the studies of village character, which ran for quite a time, and were noticed and copied by many papers both in the East and West. Later the Egyptian friezes made their appearance on Monday mornings, archaeologically correct and brimful of humor, the best things in this line that have been done either by the daily or weekly press. The last few weeks, however, we find him taking up an even more original line in the connecting of the prehistoric man of the stone age with comedy of everyday life of the present. Taylor is a diligent worker, and during the week makes many happy hits. His cartoons are copied by the largest papers, both in America and across the water, and his future is assured.

At a lecture for the Aldus Society, April 9, 2009, Richard Samuel West spoke of Taylor’s work in Light:

…Taylor’s contributions were nearly as numerous as [Thomas E.] Powers. An Illinois native, Taylor was twenty-four when he began contributing to Light. He was a fine caricaturist and drew many of the magazine’s best political cartoons. Of all those who worked for Light, his future appeared brightest. Taylor’s career as a cartoonist reached its apex at the end of the century when he drew memorable chromolithographic cartoons savaging McKinley and Roosevelt for the New York weekly, The Verdict. For the remainder of his career, he worked as a cartoonist and illustrator for a variety of New York newspapers and magazines.

Taylor, Thomas E. Powers and W.W. Denslow were members of the Whitechapel Club. Two photographs of the club and some members were published in The American Magazine, February 1913:

…It was founded in 1887, and first had rooms back of Henry Coster’s saloon in an alley near the chicago News building. It soon gathered unto itself all the clever men of chicago who were writing for newspapers, and a few of their intimate comrades in other lines of work but of sympathetic spirit….

The club was nameless at first. But one afternoon a group were sitting in one of the rooms when a newsboy passed through the alley and cried: ‘All about the latest Whitechapel murder!’ Seymour paused with a stein of beer half lifted and said: ‘We’ll call the new club the ‘Whitechapel Club.’ ”

According to the Artistic Guide to Chicago and the World’s Columbian Exposition (1892), Taylor was on the Whitechapel Club’s board of directors from 1889 to 1890.

He, Powers, and J.T. McCutcheon were some of the artists represented in the fourth annual black-and-white exhibition of the Chicago Society of Artists as reported in the Inter Ocean, February 20, 1892. Three years later, the Inter Ocean, March 17, 1895, singled out Taylor and McCutcheon’s work in the annual show. The Midland Monthly, November 1895, featured an article on newspaper illustrating with drawings, by Charles A. Gray, of several artists including Taylor (top).

Taylor has not been found in the 1900 census. The Alumni Record said his studio was at 31 Union Square West in Manhattan, New York City, from 1902 to 1905, and his residence in Scarsdale, New York. The Morning Telegraph (New York), May 15, 1900, reported the Press Artists exhibition and praised Taylor’s work:

The first “annual” exhibition of the Press Artists’s League was begun with great eclat last night in the east parlor of the Waldorf. The most charitable thing that can be said of it is to add your small voice to the majority, and devoutly hope that it will be the last…Among the cartoons Horace Taylor also shines in color. His few exhibits are above par, and will surprise even those who have enjoyed his clever newspaper drawings.

On September 13, 1900, the Telegraph noted his music talent: “Horace Taylor not only does cartoons that cause public men to writhe, but he woos music from a violin with the ease of a modern Orpheus, and he does not require a Eurydice to spur him on. He deprecates his music as a weakness and speaks contemptuously of his violin as a ‘fiddle.’ ”

Cartoonist Dan McCarthy’s move was reported in the Telegraph, August 4, 1901, and he said:

..I consulted a real estate friend of mine and told him I would like to build far from the madding crowd. He suggested Pompton, N.J., Leffert’s Park, and finally the place where Horace Taylor and Ray Brown live, up the Hudson, but I told him two artists in one community was quite enough….

…I want all newspaper artists to feel at home, and so I will have a long line of lockers with private keys where they can keep their collars, pencils, pens and cardboard.

He and Paul West collaborated to produce Billy Possum which was published in the Chicago Tribune from May 9 to July 11, 1909. According to American Newspaper Comics (2012), the Alphabet of Amiable Insects, a Sunday panel, was drawn by Taylor and written by Roy L. McCardell and published in the New York Press, from July 28 to August 18, 1901.

Advertisements in the Inland Printer, February 1909, Life Magazine, February 11, 1909, and The Fra, March 1909, said he was on the faculty of the W. Martin Johnson School of Art. 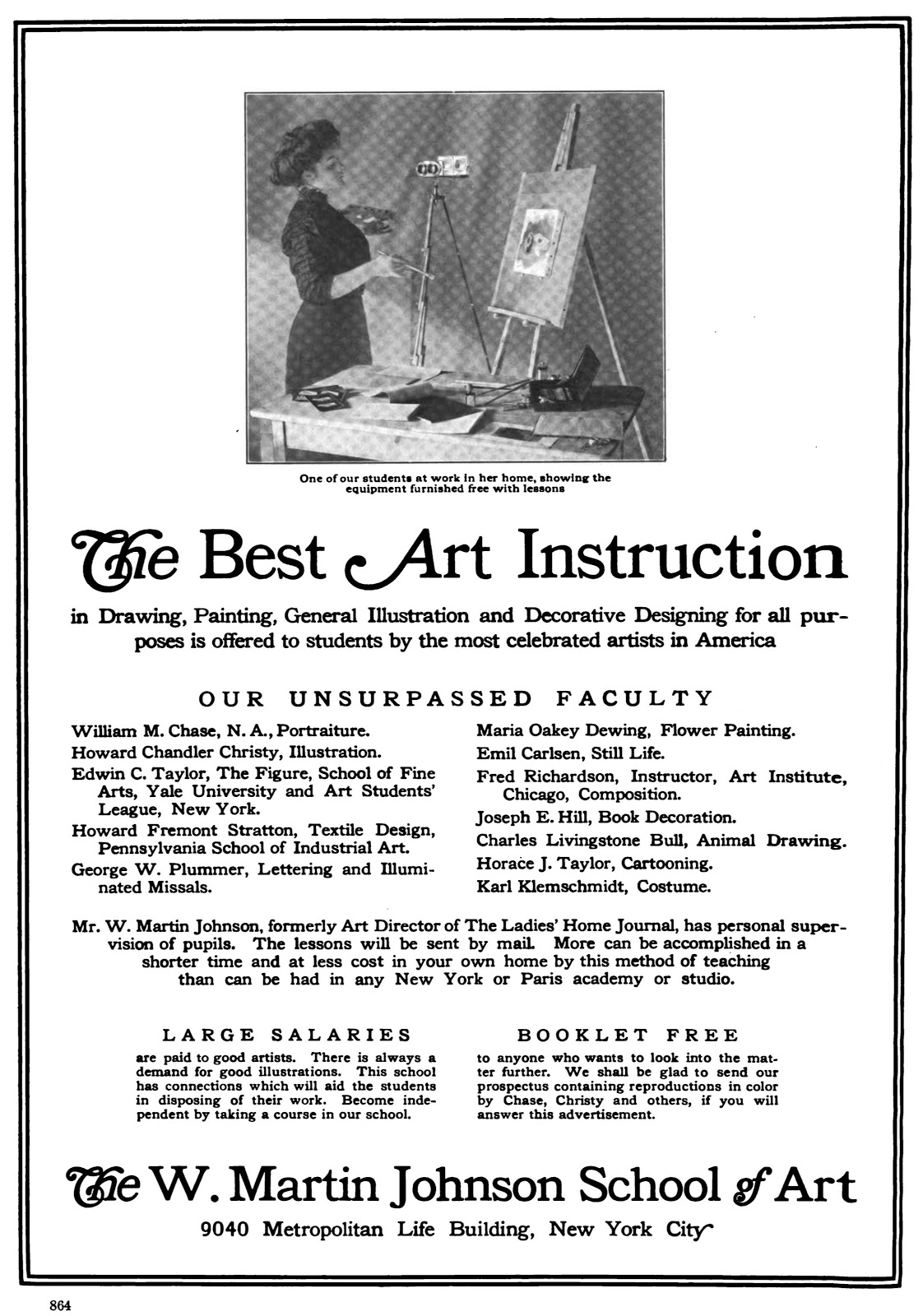 Taylor provided the child-like illustrations for the Little Johnny stories in Cosmopolitan Magazine; December 1908; 1909: March, April (below) and May. 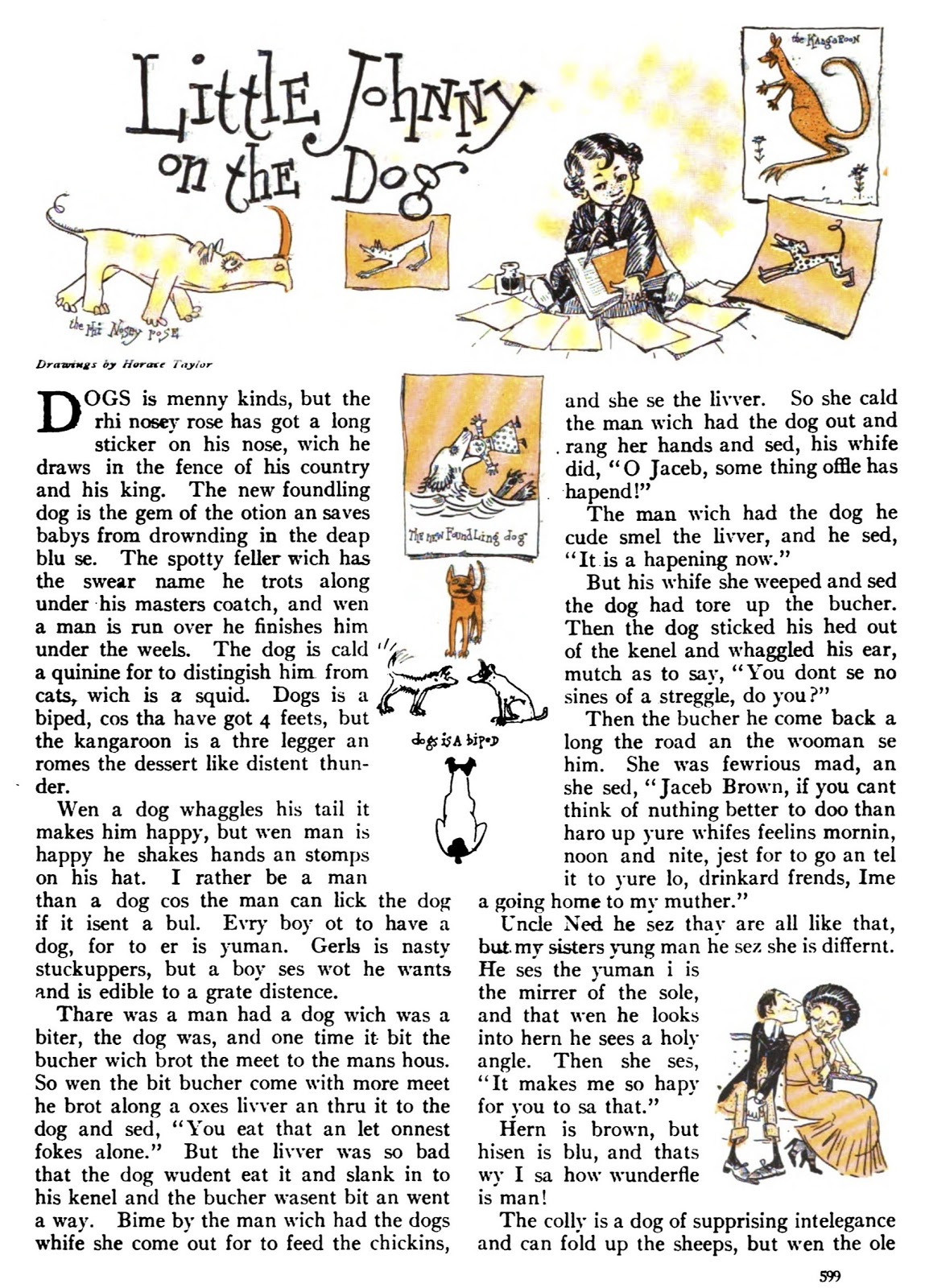 …The parade of fire fighters, cavalrymen, the fire engine, the stock brokers and things like that was merely a sort of ballyhoo before the big circus and side show that was to follow. And one mustn’t forget the lone representative from Scarsdale—Fireman Horace Taylor, illustrator and painter of Union Square,—who as the head of the Scarsdale Watercresses rode in state in a regular hired hack.

According to the 1910 census, he was a resident of Scarsdale, New York, on Grand Boulevard. His occupation was artist. The Daily Argus (Mount Vernon, New York), September 11, 1913, said he lived in Arthur Manor neighborhood of Scarsdale. The Alumni Record (1913) said his studio address was 118 East Twenty-eighth Street, from 1905 to 1911.

The Sun, February 24, 1912, published this item: “Arthur Crawford, the joke writer, whom New Rochelle [New York] knows as Old Plus Crawford because when he supplies Horace Taylor or Art Young with jokes for the weeklies the artist signs after his own name ‘A.C.’ ”

Taylor and his wife were recorded in the 1915 New York State Census, residing in Scarsdale. He was an illustrator and artist. In 1916, he worked in animation and produced four Toyland short films.


He has not been found in the 1920 census. Taylor passed away September 17, 1921, in Wisconsin. His death was reported in the Sigma Chi Quarterly, November 1921.

Horace Taylor, Kappa Kappa 1887, died at Eagle River, Wis., on September 17, 1921, of heart disease while on a fishing trip. Brother Taylor was for years a well-known newspaper cartoonist and artist in Chicago and New York.  Several years ago while in New York he had a nervous breakdown and came to Highland Park, Ill., to live with his sister. Apparently he had recovered and was preparing to open a studio in Chicago. He was a member of the Press club of Chicago. Taylor was born October 7, 1865. He received his preparatory education at the University academy and later entered the University.