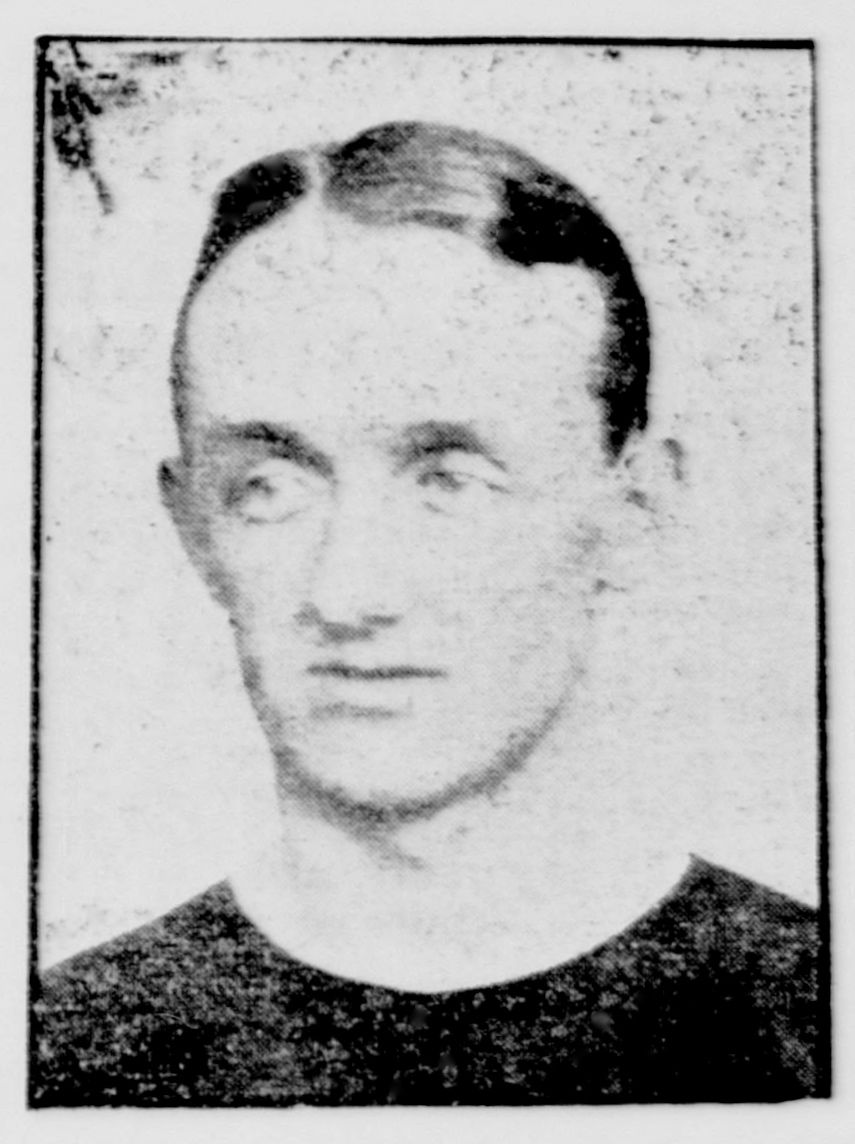 Howard Benton “Poke” Freeman was born in Portland, Oregon on September 4, 1877; his birthplace was reported in various newspapers and his birth date was on his World War I draft card. In the 1880 U.S. Federal Census, he was the only child of Thomas and Lula; his father was a carriage maker. They lived in Portland at 415 West Park.

The New York Times, August 22, 1937, published the Associated Press report which said: “…he grew up in Hayward, Calif., and began his bike riding career while in high school there. He competed in amateur, semi-professional and professional ranks…” An article about cycle riders’ income was published in the Syracuse Standard (New York), October 19, 1898: “…Howard “Poke” Freeman, “Old Kaintuck” Kimble and “Plugger Bill” Martin are about the only remaining riders who followed the game all the year that made any profit. Freeman is about $1,500 better off than when he started…”

The 1900 census recorded him in Newark, New Jersey at 1107 Broad Street. He and another cyclist were boarding there; their profession was bicycle racing. The Evening Telegram (New York), July 29, 1901, reported a major cycling event:

The National Circuit Meet at Madison Square Garden this evening will bring all the crack “pro” and amateur riders together once more. The program is long and interesting….

…In the two big professional events…“Poke” Freeman…[is] among the starters.

Known as the “Artist Cyclist,” because of his ability as a sketcher for the daily and weekly papers, Howard B. Freeman, of Portland, Ore., is a typical representative of the quiet, gentlemanly American bicycle rider. His winnings, and they amount to a goodly sum in the course of a summer, pay for his tuition during the winter at the art school. Possessing an extraordinary finishing sprint, Freeman has come to the front very rapidly since ’95, when he made his first appearance as an amateur in California.

His most meritorious ride was when he broke the world’s one-mile handicap record at Los Angeles, lowering the figures to 1:57 4-5. He is a Rambler rider who should win a goodly portion of the prizes offered on the Grand Circuit. His victory at Ambrose Park in ’98, when he captured the Twentieth Century $1,000 trophy is a matter of cycling history, while his victory over Major Taylor in the one-mile championship at New Haven last season stamps him as a speed merchant of more than ordinary ability. Freeman is 24 years old, and weighs 165 pounds when in training.

The New-York Tribune, January 8, 1902, reported that Freeman (top photo) was fined for misconduct and included this prescient observation: “…Freeman is something of an artist with his pen, and will probably take to that business when he grows too old to indulge in bicycle racing.”

Freeman has not been found in the 1910 census. The Times explained how he got started as a cartoonist:

He was a natural artist and after years of bike racing a friend noticed his drawings and suggested a career as cartoonist. Mr. Freeman agreed to try and the friend gave him a letter of introduction to the late Homer Davenport, then political cartoonist for The New York Journal.

Coming to New York Mr. Freeman accidentally met Davenport in a restaurant. He was idly drawing sketches on a menu when a man sitting near him took notice.

“That’s pretty good stuff your’e doing,” he said. “I might be able to help you. I’m Homer Davenport.”

Freeman told Davenport who he was, gave him the letter of introduction and quickly made a success cartooning.

The article also noted that he was a cartoonist with the Newark Evening News since 1912. Freeman’s love of cycling continued through cartoons for Motorcycle and Bicycle Illustrated and Motorcycling and Bicycling, and participating in an old timers event. 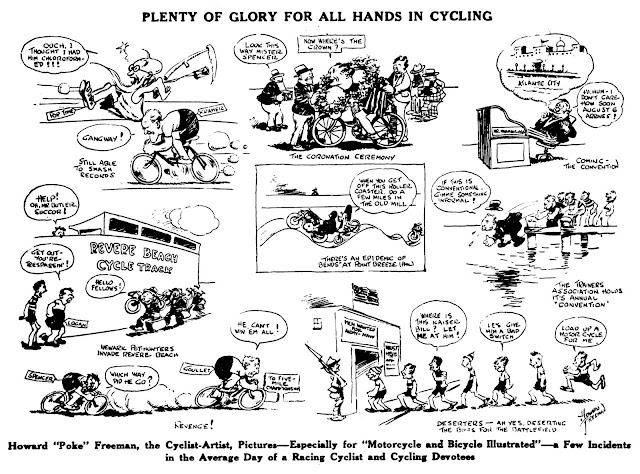 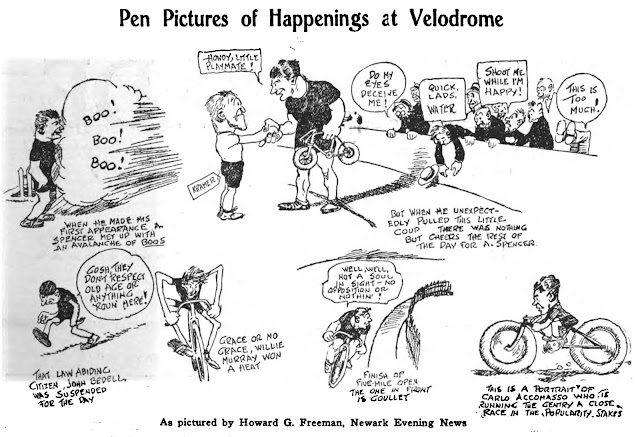 On September 12, 1918 he signed his World War I draft card. He lived in East Orange, New Jersey at 159 North Park Way. He was a cartoonist at the Newark Evening News. He named his wife, Bessie, as his nearest relative. His description was tall, medium build with blue eyes and dark brown hair.

Freeman was at the same address in the 1920 census. His family included two daughters and he continued as a newspaper cartoonist. He created a comic strip about golf called In the Rough. According to American Newspaper Comics (2012): “The characters in this strip started in Freeman’s sports editorial cartoons for the Newark Evening News as early as 1926.” The strip began April 18, 1927 and ended April 19, 1934.

In 1930 his family lived in Newark, New Jersey at 68 Parkview Terrace. Freeman passed away August 21, 1937, in Avon, New Jersey. The cause was a heart attack. His death was reported in the Times the following day. A golf tournament and trophy were named after Freeman according to the Newark Sunday Call (New Jersey).