Hugh Doak Rankin was born Hugh Dearborn Copp in Loda, Illinois on July 2, 1878, according to a family tree at Ancestry.com. The same birthdate was recorded when he enlisted in the army during World War I. In the 1880 United States Federal Census, he and his parents, William and Ellen, were part of his maternal grandfather’s household. His father was a dry goods merchant and his grandfather a physician. They resided in Loda.

Rankin’s interest in art can be traced to his mother who was profiled in A Woman of the Century (1893):

Copp, Mrs. Helen Rankin, sculptor, born in Atlanta, Logan county, Ill., 4th August, 1853. She is descended from Scotch and German ancestors, who took a leading part in freeing America from the British yoke and from the curse of slavery. Her paternal grandfather, John Rankin, was one of the organizers of the Abolition movement. From her earliest childhood she dreamed of art. Stories and histories of artists were her favorite reading, and she tried to work out her dreams. It was weary labor, for the result was so far from her ideal. The few pictures the little country town afforded were but dreary disappointments. When she was five years old, her parents moved to Loda, Ill., where she passed her childhood and early womanhood. At the age of eighteen she attended the opening of the Chicago Exposition and for the first time saw a work of art. She returned home with renewed hope to the work of finding a way in the dark. In 1874 she became the wife of W. H. Copp, of Wolfboro, N.H., then engaged in the mercantile business in Loda. In 1884 they moved to Pullman, Ill., with one son, leaving four sons lying in the little prairie cemetery. The years of working in the dark were ended. In 1888 Mrs. Copp entered the Art Institute of Chicago. There she soon discovered that sculpture was her forte. Abandoning all thoughts of painting, she plunged into the study of modeling and anatomy with a desperation born of the knowledge that half a lifetime was gone. Entering upon her work at an age when most artists begin to achieve success, she rapidly surmounted all difficulties,, allowing herself no rest, even in vacation, and carrying off the honors of her class, until 1890, when she received the only medal ever given by the Art Institute for sculpture. Her instructor said that she had accomplished ten years’ work in three. Mrs. Copp then established a studio in Chicago. She has modeled portraits of a number of prominent citizens of that city, besides many ideal works.

Public Opinion, December 31, 1892, reported one of his early accomplishments: “Hugh Copp, the twelve-year-old son of Mrs. Ellen Rankin Copp, a well-known sculptor of Chicago, has modeled a panel showing a number of brownies in a hurdle race.” World’s Columbian Exposition Illustrated, April 1893, named some of her sculptures and noted Rankin’s talent:

…Mrs. Copp has made several pieces of statuary for the World’s Fair. Among them is “Maternity,” one of the six figures for the Illinois building. Her portrait relief in bronze of Miss Harriet Monroe will be placed in the general art exhibit of the Woman s building. A portrait bust of her grandfather, Rev. John Rankin, will be shown in the historical exhibit of the Ohio building. Other exhibits for the Illinois building will consist of a marble statue of little David Wegg, the son of the president of the Union Pacific Railroad, and a bust of Mother Eagan, who is well known for her work among the fallen women of Chicago.

A fine bronze bust of Mrs. Potter Palmer will be given a prominent position in the gallery of honor in the Woman’s building.

The largest figure ever built by a woman is called “Pele, the Goddess of Fire,” and is twenty-five feet high. It is the conception and creation of Mrs. Copp, and illustrates a romantic Hawaiian legend. It will be placed over the entrance of the Hawaiin [sic] cyclorama on Midway plaisance. The figure represents a woman seated upon a descending wave of lava; an upraised hand grasps a firebrand, while in the other is a handful of rocks which have the appearance of being cast into the sea.

Master Hugh D. Copp, the young man seen in the illustration, is the only son of Mrs. Copp. From his earliest childhood he expressed a desire to be a sculptor. When eight years of age he modeled a swan from memory, which was seen by first-class artists and pronounced a marvelous production. His especial delight and studies are the creation of original Brownies. He has presented the children’s room in the Woman’s building, with a panel in plaster of Brownies indulging in a hurdle race. 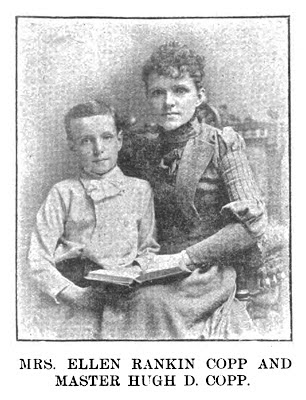 The Kindergarten Magazine, April 1894, said Rankin received $300 to further his art studies. A profile in the National Cyclopedia of American Biography (1898) said: “…In 1894 she went to Munich for one year studying in the Fehr School. While in Munich Mrs. Rankin took a studio, and modeled an ideal group, ‘The Nation’s Strength,’ which attracted much attention at the annual salon, and was purchased by the American consul….” The Chicago Tribune, December 16, 1894, published a letter from Rankin. (ProQuest summary: Hugh Copp, the Pullman boy, who won a prize at the World's Fair for the “Brownie” panel, exhibited in the Woman’s Building, is now in Munich studying art. He is accompanied by his mother, Mrs. Ellen Rankin Copp, the well-known sculptor.) A New York passenger list recorded the return of Rankin, his mother and 7-year-old brother, Ralf, on July 20, 1895.

Tragedy came when his father attacked his in-laws as reported in the Chicago Tribune, June 29, 1897. (ProQuest summary: William H. Copp, formerly of the glazing department of Pullman's Palace Car company, crazed because of the estrangement of his wife, tried yesterday to exterminate the family of her venerable father, Dr. Andrew C.) This event was probably the reason why his mother changed her name to Ellen Houser Rankin. His middle name, Doak, can be traced to his maternal grandfather’s older brother, Samuel (1823–1897), who was married to Julia Doak (1824–1881), according to the family tree.

The 1900 census recorded the mother and son in Indianapolis, Indiana at 2440 Shelby Street. She was a sculptor and he a newspaper artist. Also residing with them was artist Arthur S. Covey, who was a year older than Rankin. The family tree said his mother passed away August 8, 1901 and was buried in Atlanta, Illinois. The date when Rankin moved from Indianapolis to Cleveland, Ohio is not known, but his illustrations and strips appeared in the Plain Dealer: Mother Goose Magic Pictures (April 6–July 20, 1902), Don Quixote in Ohio (June 21–August 16, 1903), Kenilworth DeDoghouse (September 27–November 8, 1903), and Three Little Men of the Woods (April 24, 1904–April 9, 1905). 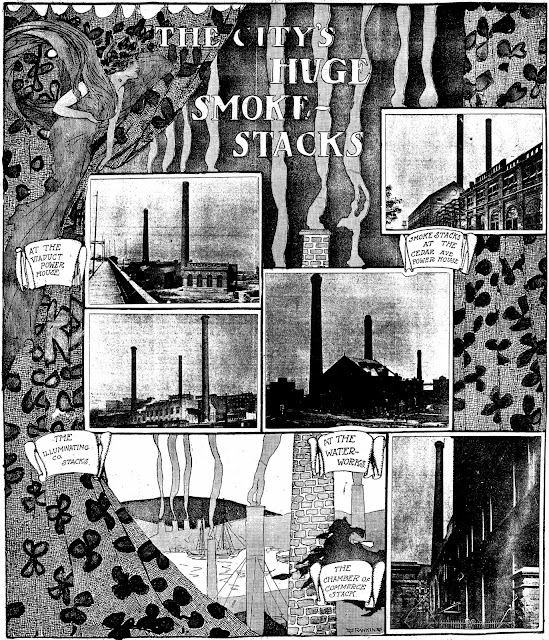 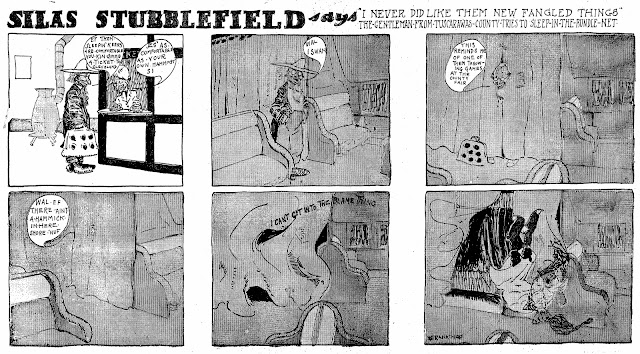 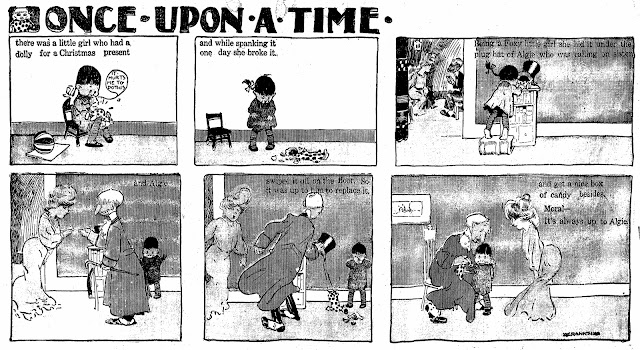 His next move was to Chicago, where, beginning in 1907, his work appeared in the Chicago Daily News in over a dozen different series, including Lord Longbow (January 9, 1909–August 23, 1915). The Library of Congress has a photographic collection, American Memory, which has photographs from the Chicago Daily News, It’s possible that Rankin is one of the five unidentified artists in the circa 1907 photographs. 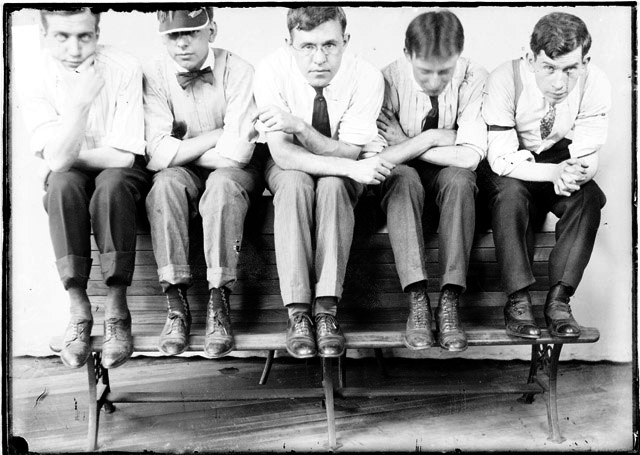 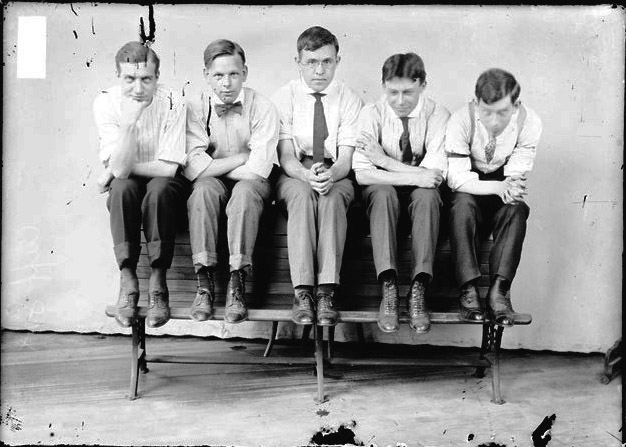 In 1910 he was reunited with his maternal grandmother. The head of the household was Paul Hermes who was married to Louiza Quindaro Rankin, the younger sister of Rankin’s mother. Also with them was Japanese servant, “Eazo Nikawagawa”, an Art Institute student. They all resided in Chicago at 1246 East 46th Street. On December 20, 1914 his grandmother passed away. He contributed to Cartoons Magazine, April 1917, “Before Adam, and After”, and February 1918, “Deviltry”. His service in the army began March 1, 1918. He illustrated books including The Camp Fire Girls in Old Kentucky (1919) and Johnny goes a-hunting (1925).

He has not been found in the 1920 census. The Motorman and Conductor, June 1921, had this item about his father: “Hugh D. Rankin, beneficiary, death claim of William H. Copp, deceased, late member of Division No. 241, Chicago, Ill.; cause, Pulmonary Edema.” The Jewelers’ Circular, November 22, 1922, acknowledged his contributions to the book, Through the Ages with Father Time. (Advertisements for Elgin Watches with his artwork are available on eBay.)

At some point, he made the switch from the newspaper to magazines, most notably as a contributor, in 1927, to Weird Tales, which was published in Chicago. In particular, he illustrated many of Robert E. Howard’s stories. The Neverending Hunt: A Bibliography of Robert E. Howard (2007) had a top ten artists list that included Rankin:

Hugh Rankin Rankin was an interior illustrator for Weird Tales, and did a fair amount of Howard illustrating. He’s on this list because Howard himself said, “I am sort of a fiend about Rankin’s illustrations myself…” Howard meant to collect Rankin’s drawings of his work and display them on a panel. What display THAT would make at the Howard House!

Most of the illustrations were signed “Hugh Rankin” or initialed “HR”. Science-Fiction: The Early Years (1990) said he used “Doak” as a pseudonym. There are a few illustrations credited to “Quindaro” (his aunt’s middle name) which, I believe, was his other pseudonym.

He has not been found in the 1930 census. It's not known when he left Chicago for Los Angeles, California. His uncle and aunt, from the 1910 census, were listed in the 1939 Los Angeles City Directory at “827 N Rampart blvd”. He shared that address with them in the 1940 census, which said they were there in 1935. He had four years of high school and was a freelance illustrator. About three weeks after the census enumeration, his aunt passed away May 13. His uncle followed on August 28, 1949.

In Witchcraft & Sorcery, number nine, 1973, E. Hoffman Price wrote about his meetings with Rankin, who had illustrated one of his Weird Tales stories. The last time Price saw Rankin was January 3, 1952, at his Los Angeles home, 446 North Occidental.

Rankin passed away January 3, 1956, in Los Angeles, according to the family tree which had this note: “Although he was actually buried at Ft. Rosecrans National Cemetery in San Diego, his name is engraved on his mother’s gravestone in the Atlanta Cemetery in Loda, Illinois. In both places his name is listed as Hugh D. Rankin.”