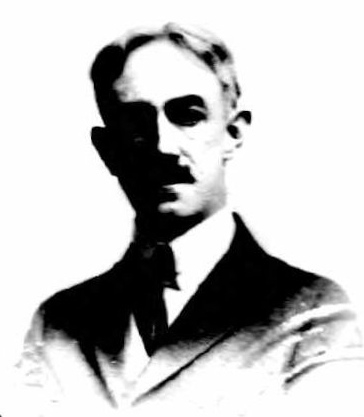 Paul Clarendon West was born in Boston, Massachusetts, at 13 Hanson Street, on January 26, 1871, according to his 1918 passport application (see photo). His description was five feet ten inches, brown eyes, grayish hair, and a tattooed name on his left arm. The application also said his father died in 1892. His middle name was found in a Google search.


In the 1880 U.S. Federal Census he was the oldest of four children born to Paul, a lawyer, and Fannie. They lived in Boston at 778 Broadway.

The name of Paul West has been more or less identified with theatrical affairs in this country for the past fifteen years, but he has recently come to the fore with considerable import as a playwright and songwriter. His name has been on Broadway play-bills dozens of times within the past five years, and his is a future that is pretty sure to bring a wealth of success and prosperity. Mr. West was born in Boston, Mass., and was educated at the Boston Latin School and at Peekskill Military Academy. From 1888 to 1892 he was engaged in newspaper work in Lawrence, Mass., and his native city. The two years following he was press representative with the Hoyt forces, after which he served as business-manager for a season each with Camille D’Arville, “The Sphinx” and Frank Daniels. Mr. West took up newspaper work again in 1897 on the New York Evening Journal, the following year becoming affiliated with the New York Sunday World, with which paper he has remained ever since. As a contributor to stage literature, Mr. West has written several hundred musical numbers that have been interpolated in various musical plays. Among the pieces for which he has been responsible, one finds: “Fad and Folly,” 1902, for Mrs. Osborn’s Playhouse; “The Man from China,” 1904, produced at the Majestic; “The Pearl and the Pumpkin,” 1905, for Klaw and Erlanger; the adaptation of “Sergeant Brue,” 1905, for Frank Daniels; “Fascinating Flora,” 1907, at the Casino; and “The Love Waltz,” 1908, a pretentious vaudeville offering. He also wrote the lyrics for “The White Hen,” 1907, for Louis Mann, and “The Merry-Go-Round,” 1908, produced at the Circle Theatre. Mr. West is most energetic and ambitious, with considerable facile power as a lyric writer, and there is no question that his to-morrows hold many bright things for him. 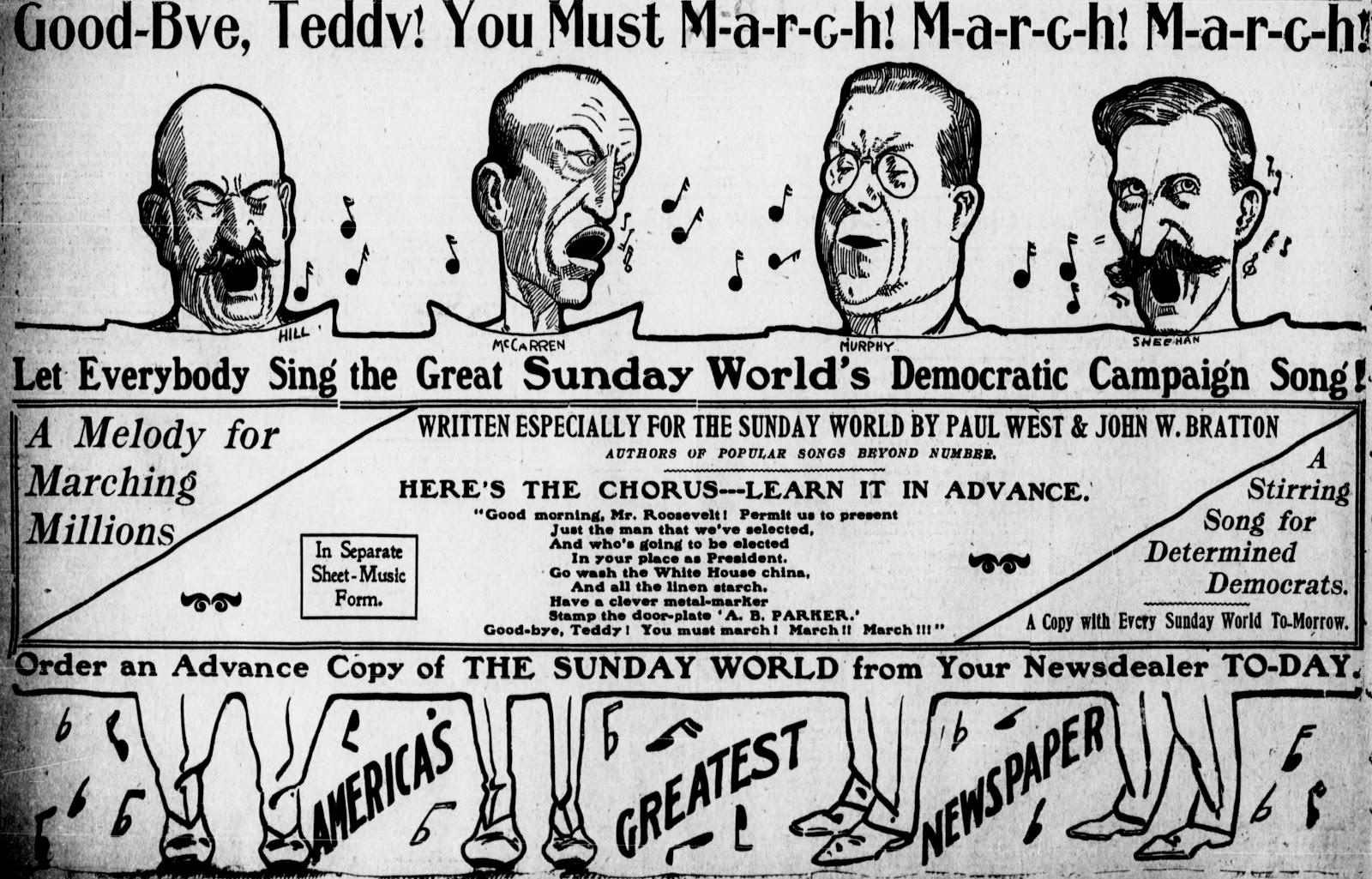 The Morning Telegraph (New York), August 4, 1901, reported cartoonist Dan McCarthy’s plan to move from his Harlem flat to the countryside. About the design of his new home he said:

“…I want all newspaper artists to feel at home, and so I will have a long line of lockers with private keys where they can keep clean collars, pencils, pens and cardboard.

He collaborated with W.W. Denslow to create the illustrated book, The Pearl and the Pumpkin (1904), which was turned into a musical the following year. The New York Dramatic Mirror, October 31, 1908, published this item: “The Leffler-Bratton company will begin rehearsals this week for their new muscle comedy production. The Newlyweds and Their Baby, by Aaron Hoffman and Paul West, founded on the cartoons by George McManus.” 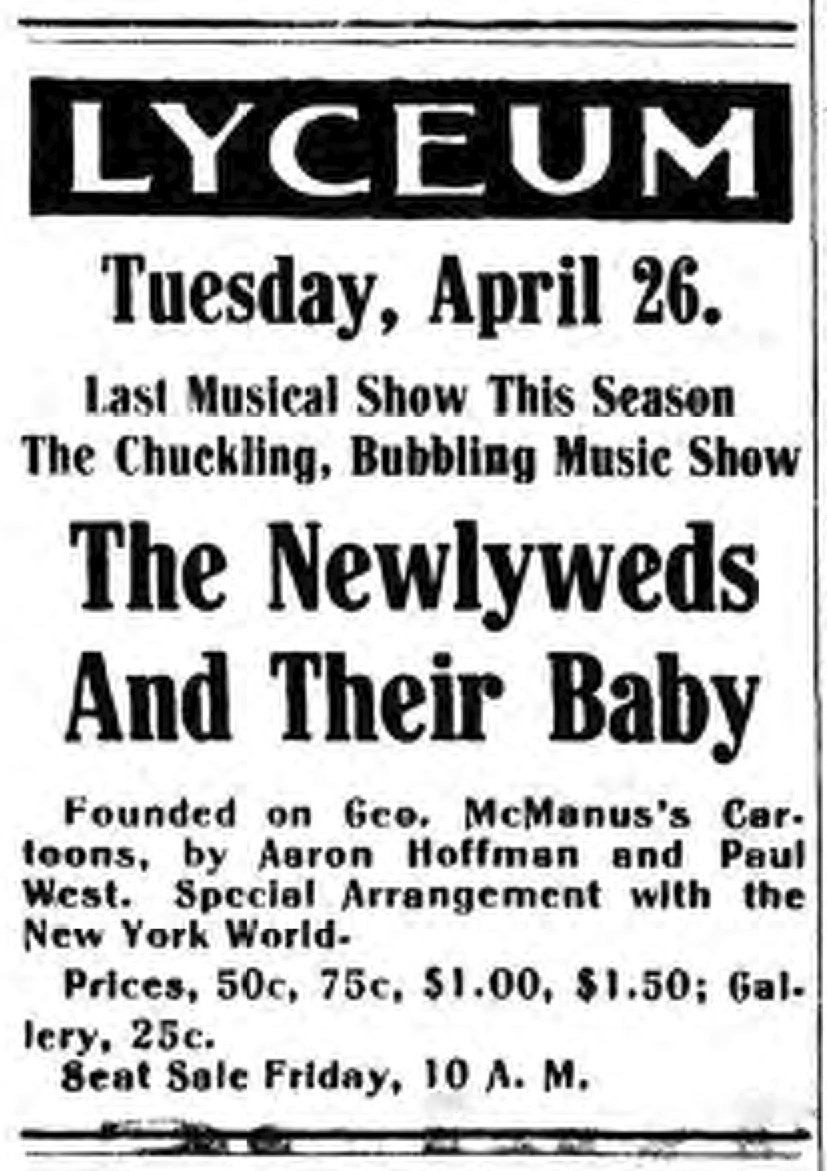 The 1910 census recorded West in Manhattan, New York City, at 610 West 111th Street. His occupation was newspaper editor. Many of his short stories appeared in the New-York Tribune. On April 24, 1918, he sailed to France for Red Cross duty. On October 26, the New York Sun reported his disappearance.

Paul West, a prominent figure in New York newspaper work, is missing from his quarters in Paris, where he went as a Red Cross worker, and the officials fear that he is dead. Information concerning his disappearance came yesterday by The Associated Press in the following despatch:

“Paris, Oct. 25.—Paul West, a New York writer, who came to France as a Red Cross worker, has disappeared. His cap was found on a Paris bridge. With it were two cards. One was addressed to Captain R.T. Townsend, and on the other was written in French: ‘When this is found I shall be dead.’ ”

West’s health has been bad, and he was to have sailed for America this week. Mrs. West and her daughter, Miss Jane West, live in East fiftieth street. At the home yesterday Miss West said:

“Father went with many other Red Cross men to the front lines at Chateau Thierry. He worked there through the crisis of the battle, and while he was with the wounded in the dugout he was gassed. A cablegram came to us telling of the gassing but it said that it was nothing to worry about. For a week he was in the hospital at the front. Later it was possible to move him and they sent him to Paris where he was in another hospital for some time.

“We thought he had quite recovered and he thought so, too. His letters were cheerful and he was planning to come home. We thought that he had actually sailed, for it was only two days ago that we received a cablegram saying he was about to sail on the same ship bringing Gen. Thornton of the British Mission.”

Paul West wrote a great quantity of comic verse and short stories, in addition to doing much regular work for the New York press. He was the “Fluffy Ruffles” of the Herald [It’s not clear to me how West was connected to this feature. Carolyn Wells was credited for the verses.]; wrote “The Dime Novels of an Office Boy,” “Widow Wise,” “Just Boy” and hundreds of other short works.

As a playwright he created “The Man from China,” “The Pearl and the Pumpkin,” “The Song Shop,” “The Red Petticoat,” and other popular light plays. More than 300 songs came from his pen and moving pictures fans have seen 100 pictures made from his scenarios.

On October 30, the Sun reported his death:

Paul West’s Body Found.
Discovered in Seine in Paris, Near Where He Left Note

Paris, Oct. 29.—The body of Paul West of New York, who came to France to work for the American Red Cross and who disappeared last week, was found yesterday in the River Seine.

The Paris edition of the New York Herald says the body was found close to the bridge where he left his cap with a note, and which was found after his disappearance. The body had lodged beneath a barge, and was fully dressed in the Red Cross uniform and overcoat.

Capt. West left here on April 24 to work in France for the Red Cross. His wife and two children, Miss Jane Elizabeth and Paul West, Jr., the latter of whom is in France with the American forces, survive him. He was in the front line with the American troops at Chateau Thierry and again at St. Mihiel.

Capt. West was a native of Boston, and worked there as a newspaper reporter, joke writer, chalk plate artist and theatrical press agent before he came to New York, where he achieved great success as a writer of songs, light musical plays, books and newspaper and other stories, aw well as more than a hundred motion picture scenarios.

And he was remembered in the Authors’ League Bulletin, December 1918. The Reno Evening Gazette, January 15, 1919, reported the following:

Grave of Red Cross Worker Is Decorated
Paris, Jan. 15.—American newspapermen went to the American Red Cross cemetery this afternoon and placed a wreath on the grave of Paul West, well known New York writer and Red Cross worker. The flower covered grave was photographed and copies will be sent to his late home.

Paul West died in Paris after his return from the Western front where he had engaged in war work and at one time narrowly escaped death when a shell from a big German gun exploded near him. He suffered from shell shock as a result.

Hi Cole --
This is an Alex Jay post (as are all posts headed Ink-Slinger Profiles), but I agree with you that the art looks like Cory's work.