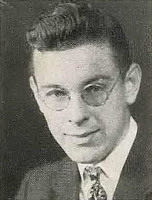 Carlisle Carlton Cooper, Jr. was born in Alabama on September 6, 1919. His birth date was found at a public record at Ancestry.com, and his World War II enlistment record had the birth state.

In the 1920 U.S. Federal Census, he was the only child of Carlisle and Mazie. His father was a dry goods traveling salesman. They lived in Andalusia, Alabama on Riley Rankin Street.

Ten years later, he, his parents and brother, James, resided in Charlotte, North Carolina at 1304 Harding Place. He attended Central High School and, in his senior year (top photo), contributed art to his yearbook, Snips and Cuts 1937. 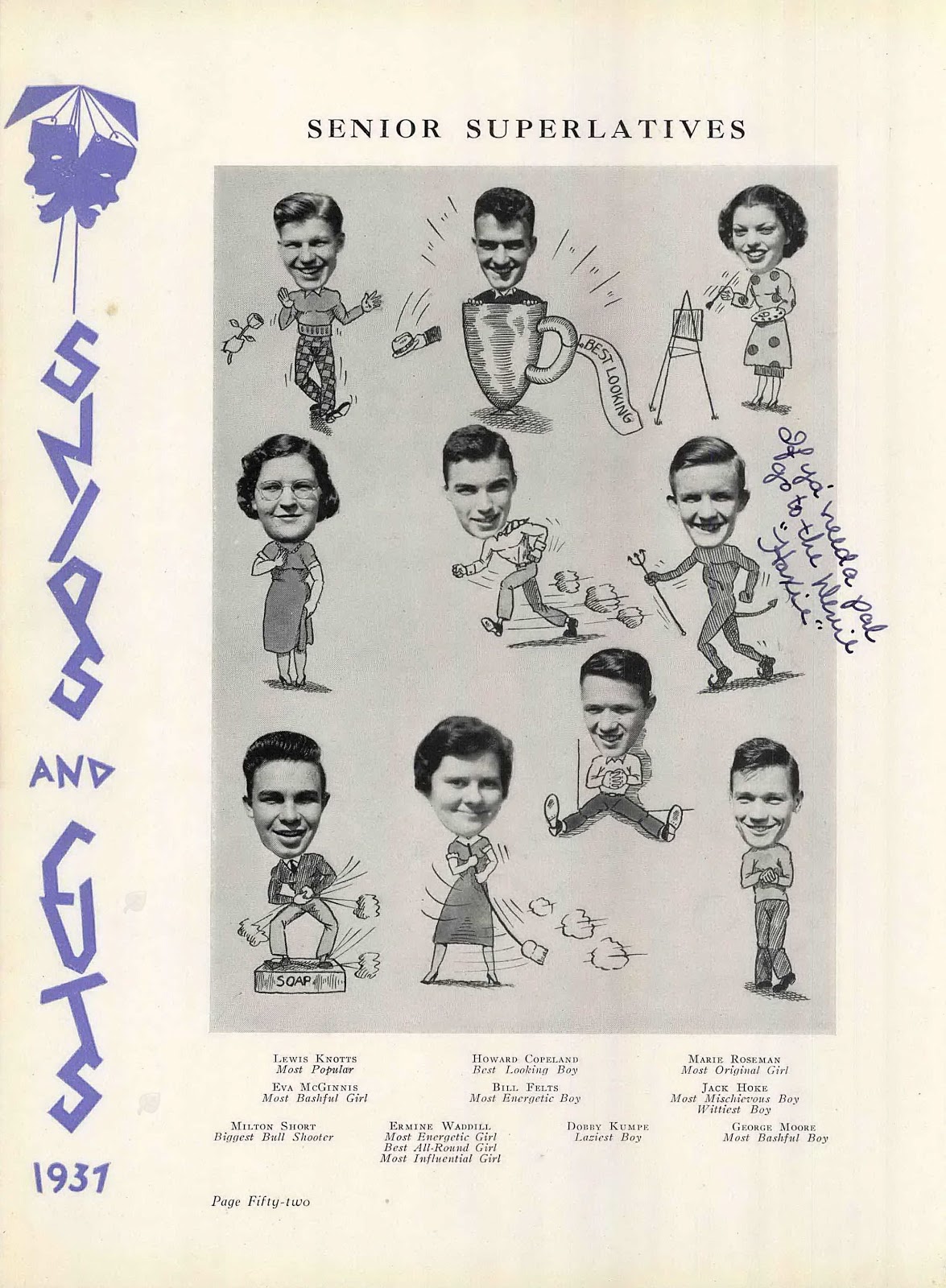 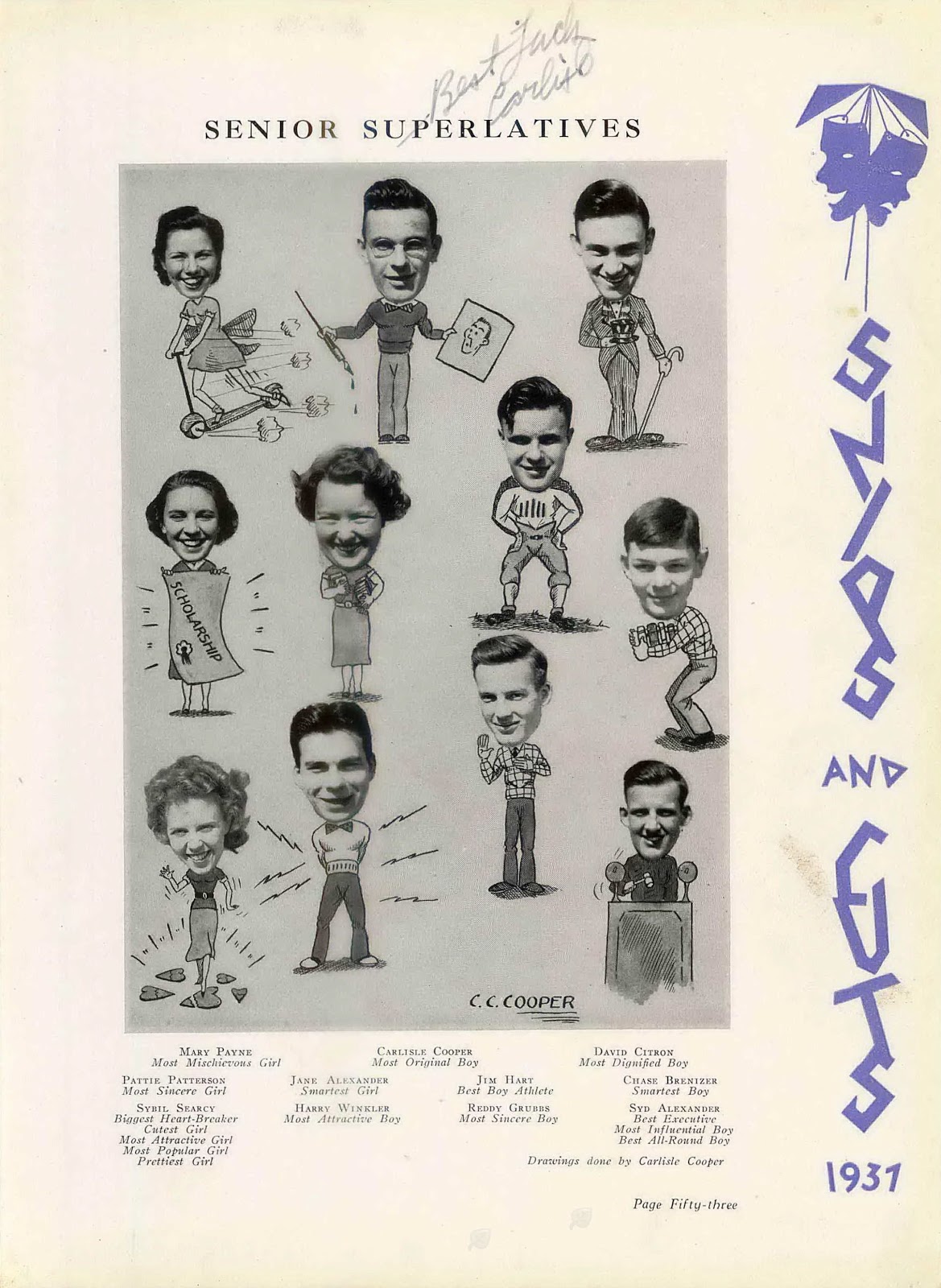 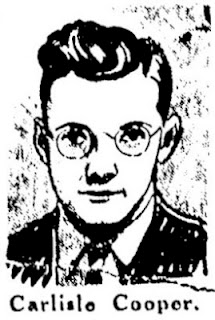 Why? There are several reasons. First, I enjoy cartooning more than anything else I have ever done; second, it pays well and is one of the best fields of self-expression in the business world. I keep these facts in mind all the time.

I have always been interested in drawing—cartooning was a development of that interest. In the first grade I learned that I liked to draw. Since, I have been drawing, drawing and drawing! I have averaged at least one picture a day during school months. I am 17 now.

About four years ago I took a correspondence course in cartooning. The course soon made me see that my drawings were very crude. I had never known the many little tricks that give a drawing a professional appearance.

Those lessons opened a new field of thought to me. I realized my work must improve and began studying in earnest. I am now taking another correspondence course and learning new things. In the last year four of my cartoons have been published and I have won various prizes for other work.

A cartoonist must remember that it’s the idea that counts most of all. He must keep practicing: it’s the only way to improve. He must never be satisfied with his work, but continually strive for better ideas ad drawings.


The Fillmore Gazette, June 11, 2012, said Cooper “…was an avid drawer of adventure figures from a young age.” After high school he attended Duke University. Hill’s Charlotte City Directory 1938 listed him, as a student, and his parents at 1348 Harding Place. Their address in the 1939 directory was 211 E Park Avenue. His father passed away July 9, 1939.

The 1940 census, which was enumerated in April, recorded Cooper, his mother and brother in Andalusia, Alabama at 402 Smith Street. His mother was an artist working on a Works Progress Administration project. Having completed four years of college, he moved to Chicago, according to the Gazette, to study cartooning at the Academy of Fine Arts.

On October 27, 1940 his comic strip, Fighting with Daniel Boone, debuted in the Chicago Tribune Comic Book. It ended May 9, 1943. The Press-Courier (Oxnard, California), January 25, 1981, said he “…had to give it up hen he was stationed in England during world War II.” He had enlisted in the army August 5, 1942, according to Ancestry.com. After his discharge in 1945, the Gazette said:

…Cooper studied nights and weekends at the American Academy of Art (Chicago) where he met teacher William Mosby. Carlisle suggests that had it not been for Mosby, a graduate of Brussels Academy of Fine Art, he would have never realized his own talent as a painter….

Cooper later received his master’s degree in art education at the Art Institute of Chicago where he studied under Isobel McKinnon [sic] Rupprecht and Edgar Rupprecht, original students and sponsors of Hans Hoffman, as well as Boris Anisfeld, internationally known Russian painter and former set-designer for the Metropolitan Opera House, New York.

Polk’s Glendale (California) City Directory 1951 listed him at 1227 North Brand Boulevard. The Press-Courier said he returned to Chicago and, in 1959, moved to Seattle. There, he married Brigitte Dehmelt, a dancer, on May 28, 1960, as reported in the Seattle Times, May 29. After their wedding trip to San Juan Islands and British Columbia, they settled in Seattle.

The Press-Courier said they moved, in September 1963, to Ventura, California, where he accepted a teaching position at Ventura College (see photo below). 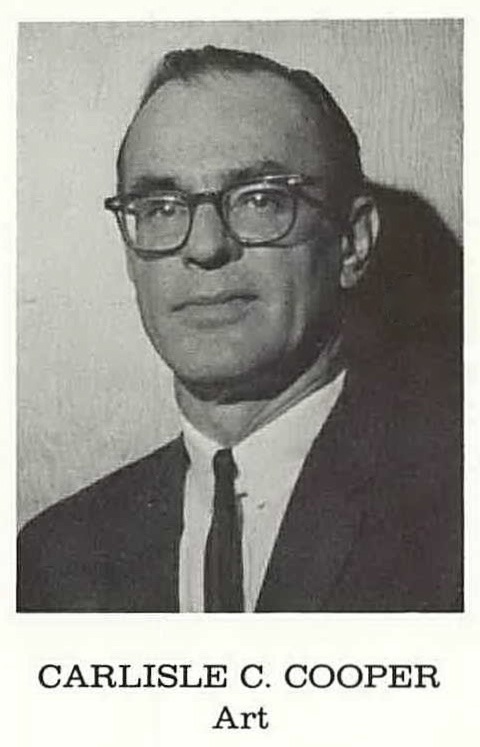 He retired from teaching in 2011 and continues to paint at home.