Eugene Anthony “Gene” McNerney Jr. was born in Philadelphia, Pennsylvania on August 11, 1899, according to his World War I draft card and the 1900 U.S. Federal Census. In the census, he was the only child of Eugene, a letter carrier, and Margaret. They lived in Philadelphia at 1225 North 18th Street.

McNerney attended the Academy of the Fine Arts in Philadlephia. The Evening Public Ledger (Pennsylvania), March 24, 1919, reported the caricature exhibition at the Academy and noted his contribution:

…By far the most popular picture for funmaking was Carles’ “Marseillaise.” One version by Eugene McNerney showed Carrie Nation rampant, arms outstretched, brandishing a hatchet over the dead body of “John Barleycorn, who died with his boots on.” This version won the third prize of a copper cent medal.

His Academy award-winning ways were noted in the Philadelphia Inquirer (Pennsylvania), June 1, 1919:

Eugene McNerney, Jr., of this city, won the Ramborger prize of $25 for the best drawing in black and white of a head from life by a pupil who has not been under instruction for over two years. The same student also was given the first Zoological prize of $30 for studies of animals in the Zoo. 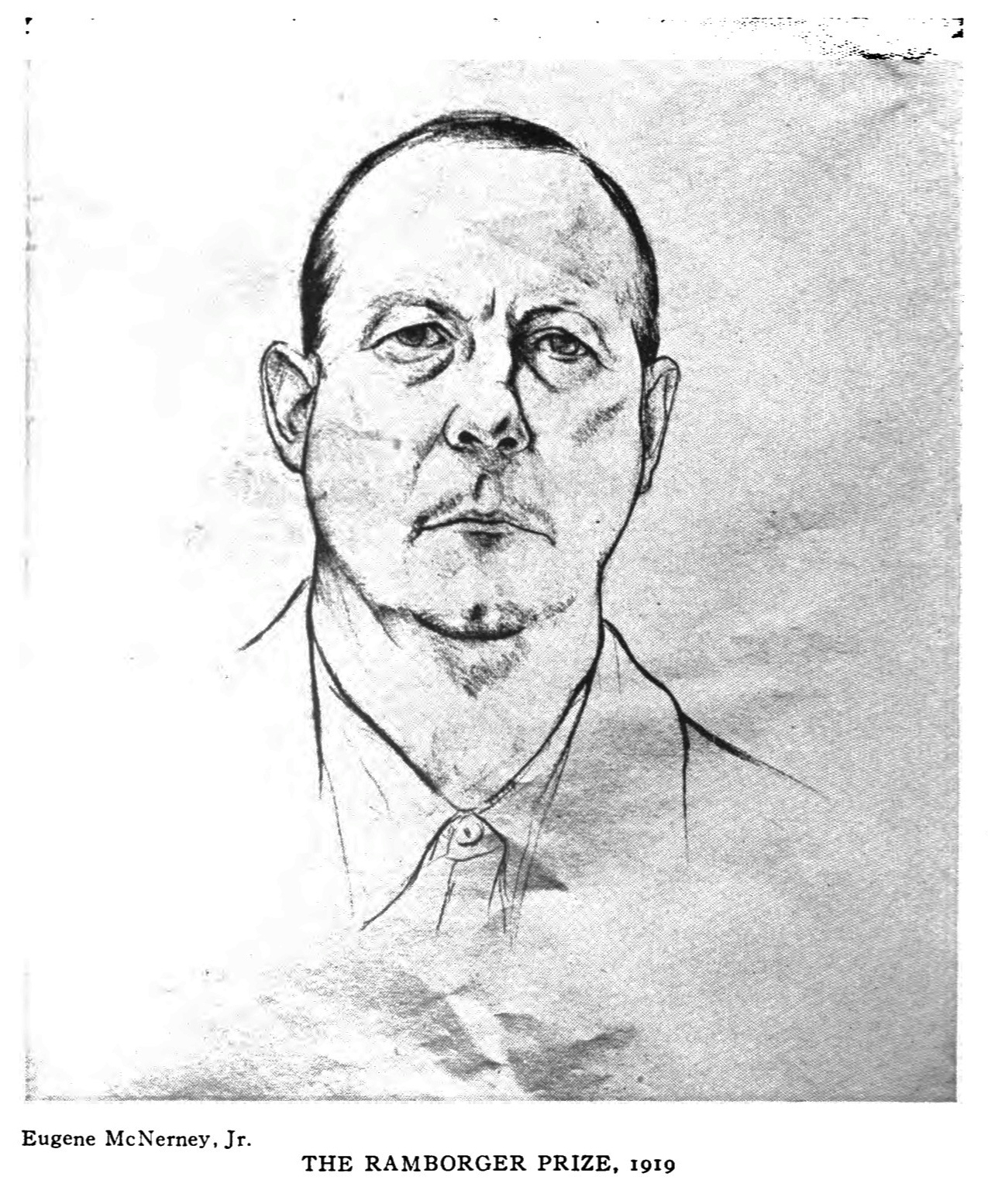 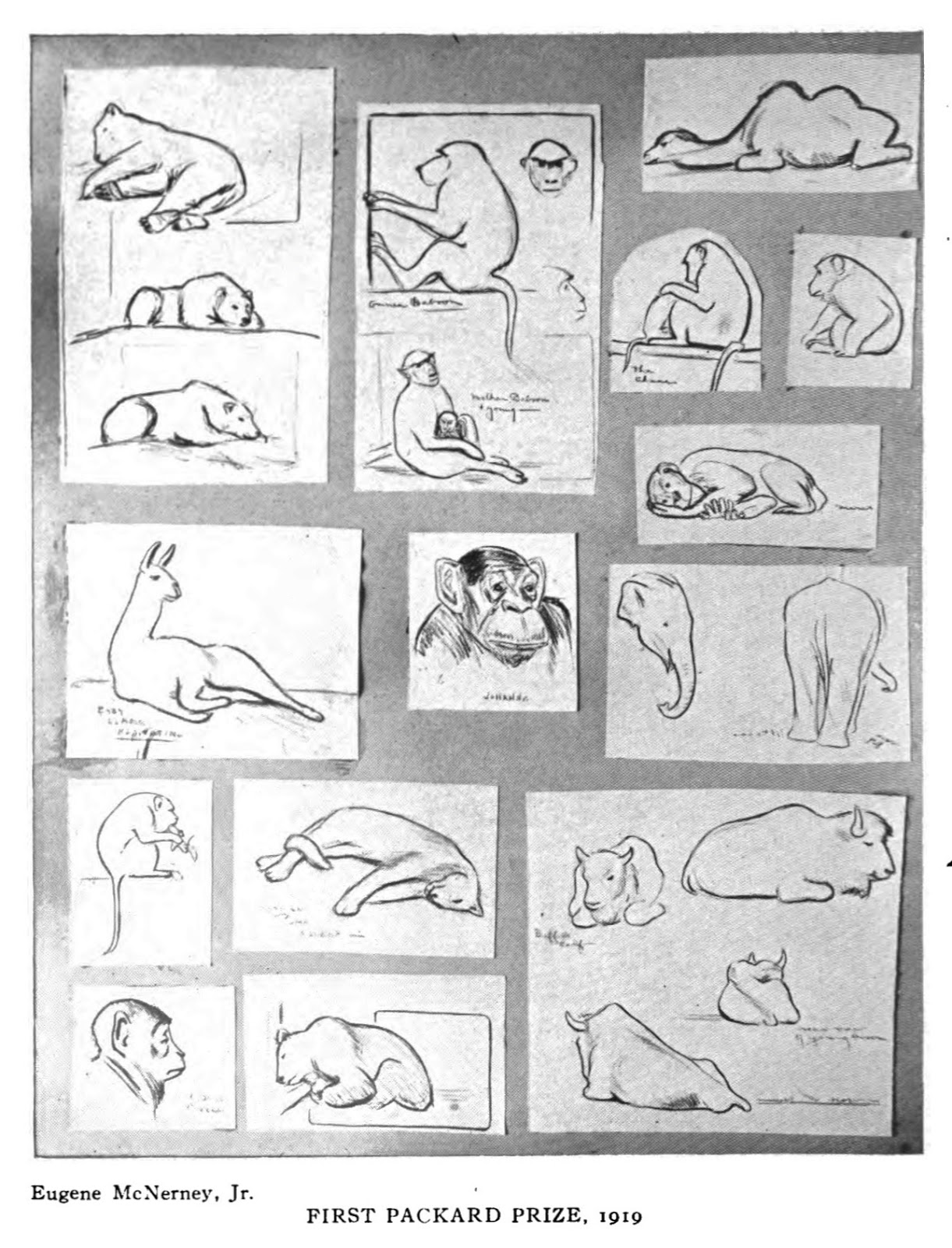 Soon afterwards, he was working for a local newspaper, according to the Inquirer, July 27, 1919:

Artists on staffs of Philadelphia newspapers were entertained yesterday by the officials of the Academy of Fine Arts at the Academy’s Summer School of Art at Chester Springs. Cartoonists, illustrators, “funny” men and sports picture-makers went out on an early train and spent the day sketching, swimming in the famous quarry pool, playing tennis and sampling the mineral springs.

Among those who went were: …Eugene McNerney…

The 1920 census recorded him, a newspaper artist, and his parents in Philadelphia at 3254 Ridge Avenue. He was the drawing instructor at the Pennsylvania Museum and School of Industrial Art. The Philadelphia, Pennsylvania, Marriage Index, 1885-1951, at Ancestry.com, said he married Anne Devine in 1923. Evidently he moved to the East Coast to be closer to the New York City publishers. The Westport, Connecticut, City Directory 1927 listed him on East Meadow Road. He was a contributor to the New Yorker magazine.

In the next census he, his wife and daughter, Nora, remained in Westport on East Meadow Lane. He was an illustrator. His drawing of “The American Flapper” appeared in Scribner’s Magazine, January 1937.

McNerney has not been found in the 1940 census. He may have resided in Chicago for a period of time, when he produced Kit Cabot for the Chicago Tribune Comic Book; the strip ran from June 8, 1941 to April 26, 1942.

During World War II, he enlisted in the Marine Corps from 1942 to 1945; starting as a private and finishing as a captain. The San Diego (California) City Directory, 1943, said he resided at 612 Prospect, during his service. He continued with the Marine Corps Officers Volunteer Reserve and attained the rank of major, according to the U.S. Marine Corps Muster Rolls, 1798-1958, at Ancestry.com. The Marine Corps Reserve: A History (1966) acknowledged his work.

McNerney passed away December 25, 1980, according to the California, Death Index. The Social Security Death Index said his last residence was Huntington Beach, California.

Comments:
I have just left a meeting with a retired USMC officer and the daughter of Gene McNerney to discuss his service in the USMC with General Holland Smith and the art work and writings her father produced during his time with General Smith. As a result I started to roam about for further information about McNerney and found your blog. A lovely coincidence!

I know this is late, but I have a drawing signed "E. MCNERNEY JR Capt USMC / 44 with s brief note to my grandfather. My email address is gstahl75672@gmail.com....looking for information on this drawing.