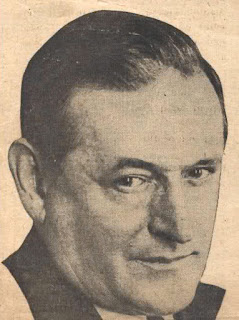 Herbert Anthony Aloysius “Hype” Igoe was born in Santa Cruz, California, on June 13, 1877, according to his World War I draft card and a 1937 passenger list at Ancestry.com. His full name was used in a “Damon Runyon Speaks Out” column, which appeared in the Oregonian (Portland, Oregon), September 20, 1932. The origin of his nickname was also explained.

Summit, N.J., Sept 19.–Now, with your kind permission, I will present to you Mr. Herbert Anthony Aloysius Igoe.

In his youth in San Francisco Mr. Igoe was two pounds lighter than a Panama hat.

He was so skinny that every time he stepped into the elevator of the old Examiner building big, fat Gus Rapp, the elevator man, would go through the pantomime of shooting a charge into his arm with a hypodermic syringe, and would sing out “Hy-p-o-o!”

Gus Rapp had a high, shrill voice. Indeed, he was the tenor in the Examiner engravers’ quartet. He sang baritone. Of course Gus Rapp’s pantomime was libelous, but he gave Mr. Igoe a tag that has stuck to him for many a year and which he has made famous all over the world.

Mr. Igoe has been using the “Hype” as a signature to his cartoons and newspaper articles for upwards of 37 years. He is one of our most celebrated sports writers, and of a vintage that brings him dangerously close to the title, “dean of the corps.”

Mr. Igoe is short, and his form would no longer suggest tissue wasting practices, even to Gus Rapp. In fact, Mr. Igoe is shaped like a man who has inadvertently swallowed a watermelon. His hair is thinning, but still coal black. He is on the lee side of 50, but his mind and spirit remain eternally young….

Walter Winchell, in his column “On Broadway”, published in the Brownsville Herald (Texas), August 9, 1941, wrote: “…The most mispronounced name in the [sports] profession is Hype Igoe’s. He is called everything from Hip Igoe to Hype Ego. The gentleman’s name is Herbert Igoe and when he first came here to New York from San Francisco, his East Side off boy used to call him ‘Hoib.’ This was gradually transformed into ‘Hype’ and he adopted it as the first half of his by-line.”

So far, the earliest use of Hype was found in 1915 when he was with The Sun. Before Hype, his first name was shortened to Bert.

On the 1880 U.S. Federal Census, his name was recorded as “Albert” and was the oldest son of John and Catherine [sic]. His father worked for the gas company. The family lived in Santa Cruz. The census listed a younger son, John, who died apparently at an early age as he was not listed in the 1900 census.

The undated book, Who Is Who on The World, had an entry for Igoe which said in part:

The birth year was incorrect. Edan Hughes said, in his book Artists in California, 1786-1940: “Igoe studied art under Maria Van Vleck while a student at Polytechnic High School in San Francisco and continued at the Mark Hopkins Art Institute.” Igoe started his newspaper career at as a copyboy, at age 15, on the San Francisco Examiner, according to the San Mateo Times, February 12, 1945. Igoe was involved in the annual ball of his alma mater, Franklin Grammar School, which was mentioned in the San Francisco Call, December 1, 1895. In the 1897 Crocker-Langley San Francisco Directory, he was listed as an artist who resided at 337 10th.

In the 1900 census the family lived in San Francisco at 337 Tenth Street. His father was a pipe fitter for a gas company. Igoe was a newspaper artist and a member of the Nyght Byrds, “…an organization composed exclusively of artists and scribes on the newspapers of this city…” according to the Call, January 21, 1900. He was credited with an illustration in the December 1900 issue of The Muse. The Call, October 9, 1904, covered the newspaper artists exhibit and reproduced Igoe’s art.

Cards are out announcing the marriage of Herbert Anthony Igoe and Florence Ethel Edmundson, who were married Wednesday [June 7], at St. Agnes Church in San Francisco. Rev. Father Collins was the officiating clergyman, and none but relatives witnessed the pretty ceremony.

The bride is a beautiful girl of the Titian blonde type, and wore a traveling gown of blue pongee, and blue picture hat. Her only attendant was Miss Antoinette King, who was gowned in pink crepe de chine. Hayes Igoe, brother of the groom, acted as best man, and the bride was given away by her brother, George Edmundson.

Mr. Igoe is a clever and popular artist of the Examiner staff, and has met with great success in his work. After a honeymoon. Mr. and Mrs. Igoe will live in San Francisco.

On June 26, 1930, the Nevada State Journal published the column, “Old Timer Says—,” which recounted the honeymoon:

“Ever know Igoe of the San Francisco Examiner? No, well kid, back in 1905 he was the ‘hot stuff’ writer and artist on the Examiner. Along in June 1905 he got married and did or tried to, spend his honeymoon at Lake Tahoe. Igoe and bride made a sneak out of San Francisco but were soon located at Tahoe. Within two days every hotel around the lake had the following notice posted in their lobbies:

“ ‘Stop Them!’
(Below were pen and ink sketches of the couple.)

“ ‘The above are excellent likenesses of Herbert Igoe and wife. Look out for them. They are a newly married couple.

“ ‘Herbert Anthony Igoe—Age 28 years; height about 5 1/4 feet; weight 114 pounds; wears his face edgewise and occasionally shaves; walks very erect as though he felt twice his real size and as though he amounted to something; dresses neatly in grey sack suit; wears flat rimmed derby. When last seen had dark brown eyes and long black hair but may be bald by this time and black and blue eyes as he was married long ago as June 7. His wife answers to the following description, that is, when she answers:

“Wonder if anybody has one of those notices today. They are worth some money. The sketches were by long since noted artists of the Examiner staff. Bob Edgren, whose signature, R. Edgren, you see to sports pictures and name to articles on sporting events; Max Newberry, now head of the art department of the Boston Herald; Knappenback [sic], one of the best color artists in the country; Mrs. Davidson, famed portrait artist; Jimmie Swinnerton, famed for his Little Bears and still drawing comics for the Hearst papers. Some others that Old Timer in the lapse of time has forgotten. Oh, yes, Alice Rix, who recently died in England, had a hand in the joke…. 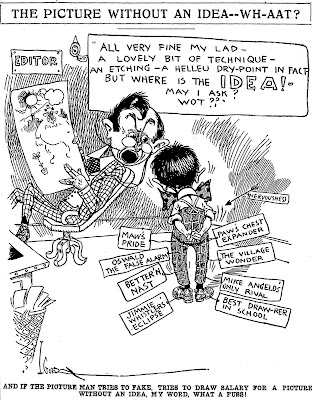 Who’s Who in The World said he “…worked in that paper’s [Examiner] art department until the year following the earthquake; came to New York and worked on New York American’s art staff for few years, thence to New York Sun as a writer of boxing, later to the Tribune, and for the past five years a member of The World’s sports staff. Is considered an authority on boxing in particular, but covers all angles of sport in a widely distributed series of drawings illustrating his own writings.”

Some of his artwork, from Sunset magazine, was reproduced in the book, Francisca Reina (1908). He drew Mr. Dwindle which ran in the New York American from December 16, 1909 to January 10, 1910. In Walter Winchell’s column, “On Broadway”, published in the San Antonio Light (Texas), August 13, 1941, he noted that “…Igoe…was one of the first to play ukulele in New York, bringing his beloved Hawaiian harp here from San Francisco early in the century.”

In 1910 Igoe lived with his wife, son Edmund, and servant at 4241 Broadway in Manhattan, New York City; he was a newspaper artist. According to American Newspaper Comics (2012), in 1911 he produced the panel, Our Comic Postcards for the New York American. The 1915 New York State Census had the same address and occupation. He signed his World War I draft card on September 12, 1918. On the card it said he was a newspaper writer at The World and his address was 513 72nd Street in Brooklyn. He named his wife as his nearest relative, who resided on Fort Washington Avenue in Manhattan. His description was medium height and build with brown eyes and black hair.

Igoe has not been found in the 1920 census but he had remarried, to Katharine Murphy, around 1920, according to the 1930 census. (Her name was mentioned in the Long Island Star-Journal (New York), February 13, 1945.) His family was involved in an auto accident which was reported in the Times, April 22, 1922. Their 17-month-old daughter suffered a skull fracture while in the arms of another passenger. At the time, they lived in the Bronx at 1706 Vyse Avenue. In the 1925 New York State Census, he, wife and daughters, Juanita and Gloria resided in Queens, New York, at 169-06 Highland Avenue. He was a newspaperman. The New York Times, February 12, 1945, said he rejoined, in 1927, The Journal, which later became The Journal-American.

The New York Tribune, October 28, 1921, reported the funeral service for Bat Masterson. Igoe was one of the honorary pallbearers. According to the Times, January 23, 1935, his father died in 1924.

In 1930 Igoe lived in Bayside, Queens at 35-52 222nd Street. With him was his wife, two daughters, mother and a servant. He was a newspaper writer. His mother, Katherine, died January 22, 1935, as reported the following day in the Times.

The 1940 census recorded the family of five, which included son Jack, at the same address. Igoe, a newspaper cartoonist and writer, had two years of high school. The 1942 New York City telephone directory listed him at 228 West 47th Street.

Igoe passed away on February 11, 1945. The Times reported that he had a heart ailment for over a year. The Cleveland Plain Dealer, February 12, 1945, published the Associated Press story which said: “…A confidante of champions from the days of James J. Corbett down to Joe Louis, Igoe had ‘covered’ all the championships heavyweight bouts for the last 40 years and was famous for his ‘inside’ stories. He illustrated his own yarns and was called the dean of fight writers. With the exception of Gene Tunney he predicted correctly the rise of each heavyweight champion….Damon Runyon, one of his oldest friends, declared Igoe was ‘probably the best informed writer on boxing that ever lived.’...” The Long Island Star-Journal, February 15, 1945, said he was buried in St. John’s Cemetery, Glendale, New York. He was a subject in a cartoon of the week’s news which appeared in the Fresno Bee Republican (California), February 17, 1945 (below). A selection of cartoons was provided by Igoe’s grandson, Kevin Igoe, at Yesterday’s Papers. 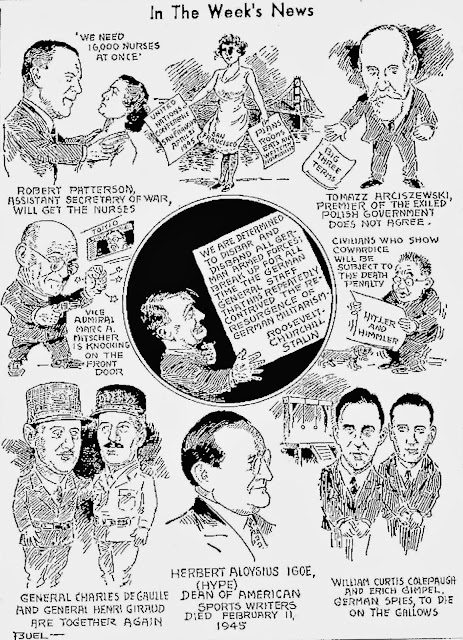