The Funny Fellows who Furnish Pictorial Political Sermons to the Newspapers

Originally published on October 21 1900 in the Dubuque Sunday Herald 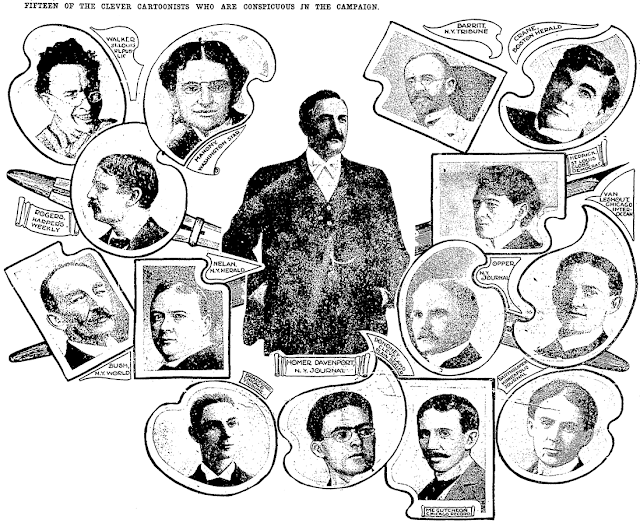 Although the modern cartoonist has not exactly pushed the spellbinder and the leader writer from the stool of chief importance, he has given these worthies a hard battle in the race for popularity, and the victor is yet to be declared. The up to date reader now takes a glance at the cartoon in his dally paper as an appetizer for the elaborate details of the news column and the clinching arguments of the editorial page. A happy depiction of the subject of current interest is the great cartoonist's forte. Since the days of Tom Nast, who did "Boss" Tweed to an untimely death with his little pencil, the cartoonist has been an indispensable feature of progressive American journalism. It was the popularity of the cartoon, a popularity due to Nast's brilliant genius, which gave rise to the humorous weekly printed in colors, and as Nast's power waned, more for want of a subject than.a lapse of energy, the public looked with longing for the appearance of Puck and Judge, with their rival cartoons from the hands of Keppler, Wales, Glllam and Opper.

Opper, now one o£ the New York Journal's staff, is among the last of the old school cartoonists, yet few of his admirers would admit that he is any the worse for that. His character studies fairly talk .from the printed sheet, his tramps are redolent of trampdom and his ward politicians seem ready to step out of the saloon and haul the reader up to vote straight. Frederick Opper was born In 1857 and began work for the New York papers at the age of 20. After doing comics for Leslie and Harper, he joined the staff of Puck, where his cartoons alternated from week to week with those of, Keppler and Wales.

Homer Davenport, the westerner whom the New York Journal has been starring, is ten years younger than Opper and has been in journalism only eight years. Born and reared .in a small town, in Oregon, he had. few advantages, and owes his skill to natural genius, supplemented by hard work. There are judges who place Davenport at the head of the American cartoonists of today, but in any contest for honors in that field Mr. Pulitzer would beg to present as a rival, The World's well known artist, Charles Green Bush.

Bush is a worker who at least did not come up in the irregular way. He believes that the cartoon should be an editorial in picture form, with a dash of humor thrown In. Before Bush found his element he studied art three years in Paris, and even after that was compelled to give lessons in drawing to make both ends meet In his little household, for while abroad he found an American girl courageous enough to marry a struggling artist. While drawing weekly cartoons for the New York Telegram, Bush made a few hits that brought him fame. One of these was his "Klondike," a powerful sermon against the lust for gold which even the religious papers copied. Then he gave David B. Hill the little hat with its big streamer bearing the legend, "I am a Democrat." Being well read in the classics, Bush draws upon history and mythology for characters and settings, while the main idea of the cartoon is often developed in a chance conversation or even worked up after the artist sits down to his task with the feeling that something must be done.  "Study, application and hard work" is his stereotyped advice to beginners who burn for fame and yearn for emoluments around the art sanctums of the New York press.

The career of Charles Nelan, cartoonist of the New York Herald, is an illustration of the fact that the cartoon is an old feature breaking into a new field. The press is growing, and the cartoon is essential to the new development. Nelan was an Ohio boy, and says that, after losing several positions for drawing funny pictures, he concluded that funny pictures must be his forte. He made his first cartoon for a weekly paper published in his native town of Akron. This drew the attention of Cleveland editors to the budding genius, and he got regular work there. Finally he engaged with a league of papers and manipulated the chalk in Cincinnati, St. Louis, Kansas City and Chicago, by which time his work was known in the east, and The Herald took him on the strength of his western reputation three years ago.

For a real free lance cartoonist one instinctively turns to Leon Barrit, now of the New York Tribune, hence a free lancer no longer. Barritt, like Topsy, "jest growed." He began active life as a newsboy in his native town of Saugerties, N. Y. From selling newspapers to reporting, editing and publishing was a natural step, but meanwhile young Barritt kept his eye upon art. He had learned wood and photo engraving, and, working at that in Boston for a year, returned to journalism and finally launched his bark upon the troubled sea of Gotham life as a contributor of cartoons to any paper which would buy. His name appeared regularly in nearly every daily of consequence, and, his ideas not being narrowed down to the requirements of a single sheet, his work had a wide range.

A newspaper man whose, name is known to the public as a clever correspondent from the seat of war in the Philippines and South Africa is John T. McCutcheon of the Chicago Record. His letters have been extensively copied, but it was only the accident of happening to be in the Pacific when Dewey sailed to Manila that caused him to put pen to paper as a journalist. He says that while at school in his native town of Lafayette, Ind., he developed cartoon symptoms, and they have stuck to him ever since.

Crane, the Boston Herald man. is new to that paper, but his work is well known In New York, having appeared in The Recorder, now defunct; The World and The Herald. He was art editor of the Philadelphia Press four years and held the same position on the New York Herald two years.

The traditions of life in America are rather reversed by the career of Felix Mahony, cartoonist of the Washington Star. Born In New York of cultured ancestry, he passed through school and college and began the study of art in Washington. Mahony Is now 30 years old and has delighted readers of The Star with cartoons and caricatures for the past three years.

A. J. Van Leshout now enlivens the Chicago Inter Ocean with a pencil once devoted to rough caricatures of railroad men who came under his notice while a telegraph operator. Finally his contributions to the press were accepted and he abandoned the key to become a cartoonist. After working two years on the staff of the New York Press, he engaged with The Inter Ocean.

Ryan Walker, whose signature—a black cat—has become famous in the St. Louis Republic, where he is the all round "funny man," is a Kentuckian 30 years old. He worked at everything from engraving to pork packing, from publishing to reporting, in order to study human nature. He turns out two or three cartoons a day, besides managing the comic supplement and doing outside work.

W. R. Bradford, who contributes an occasional cartoon to tho Chicago Tribune, is a machinist by trade and a cartoonist by nature, having inherited skill with the pencil from his father.

Hedrick of The Globe-Democrat has had a varied career as a. self-taught newspaper artist. He emigrated from the Texas prairie to the St. Louis sanctum three years ago.

"Donnie", J. H. Donahey of the Cleveland Plain Dealer, began work as the "devil" of the Ohio Democrat, and by hard study has won reputation for high art in his cartoons.

A glance at a cartoon signed "Bart" (C. L. Bartholomew) in the Minneapolis Journal is like a hasty survey of a well ordered dinner table: the beholder is conscious of being up against a feast, details of which may be left for future investigation. He is the pioneer cartoonist of the northwest, and The Journal set the pace in the matter of printing a daily cartoon.

Harper's Weekly clings to the feature which made it a power in the fight against Tweed 30 years ago. The cartoons now appearing- in that journal are the work of one of the editors—W.A. Rogers—who, like Opper, is something of an old timer. Rogers worked on The Daily Graphic in the seventies. He made a hit with a political cartoon in the Garfield-Hancock campaign, and his pencil has never since been idle. He is an all round illustrator for the weeklies and magazines.

[thanks to Cole Johnson for submitting this article]