Frank Engli was born in Chicago, Illinois on November 10, 1906, according to the Cook County, Illinois, Birth Certificates Index at Ancestry.com.

In the 1910 U.S. Federal Census, he and his sister Ella were boarding with Frank and Rose Cosma in Chicago at 1931 Wolfram Street. The two children were recorded with their Hungarian emigrant parents, Colman and Mary, in the 1920 census. They resided on a farm in Tallmadge, Michigan.

Information about Engli’s education has not been found. For his art training, Who’s Who of American Comic Books 1928–1999 said he attended the Chicago Academy of Fine Arts and the Art Institute. And in 1928 and 1929 he assisted Milton Caniff who was working for the Columbus Dispatch in Ohio. At some point Engli moved to New York City.

Milton Caniff: Conversations (2002) reprinted Will Eisner’s interview with Caniff who, in 1932, moved to New York to work in the Associated Press bullpen. Caniff recalled looking up Bil Dwyer:

Caniff: ...Now about the studio: when I reached New York I called Bil Dwyer who had also worked on the Columbus Dispatch.

Eisner: Oh—he did Dumb Dora, that was it.

Caniff: Well, it’s pertinent here. I called him just socially and told him I was in town to say hello. I didn’t know where he lived, on Christopher Street. I didn’t even know where Christopher Street was. So he said, “My God, I’m glad you called! I’ve got a problem here. Come on down!” This was like the first night I was in town and he had been submitting things to King Features and selling gags, by the way, to the magazines, Collier’s and the New Yorker. Anyway, he had submitted a gag-type strip to King Features and he got a call back saying that Paul Fung was being pulled off Dumb Dora and Dwyer had the assignment. Here he was suddenly with six strips and a Sunday page to do and he’d never done anything except single panels.

Eisner: Oh boy!
Caniff: And he was in trouble. Frank Engli was helping him.

Eisner: Frank Englil...He was a sports cartoonist, right?
Caniff: No, he did lettering. He later on did a strip called Looking Back, about stoneage characters—

Eisner: Oh, I see.
Caniff: —very well done cartooning. But his lettering was especially good. So I went down to see them and they were laboring away at the first release. Bil was a good gag writer, but he'd never had this kind of assignment before. So he said to me, “Will you sit in on this thing and especially draw the girls?” So I laid out the first batch of stuff and again, it was not hard for me to do because I had those eleven o’clock deadlines every morning. And so then I inked the girls and he inked the other characters; very simple drawing.

The Sarasota Herald (Florida), February 18, 1934, carried George Tucker’s column About New York which said: “Frank Engli, the artist, lives at No. 1 Christopher street. In Omaha he lived at No. 1 Sixteenth street, and in Salt Lake City at No. 1 Monto street.”

It was in 1933 that Zack Mosley felt confident enough to take a flier on his own. This was ‘On the Wing’, starring Mack Martin, pilot, his pal Bumpy, and his ‘gal’, Mary Miller.

It was one of eight new strips selected from over 400 by Captain Joseph Patterson, owner of the Chicago Tribune, for his Sunday comic section. Mosley was given one day to convert his daily strips to a Sunday page, complete with colour overlays. Nothing is impossible to a hopeful cartoonist, and with help from a buddy from his art school years, Frank Engli, Mosley managed it. The strip was launched on Sunday 1 October 1933...

According to Who’s Who, Engli worked as an in-betweener and opaquer on Betty Boop and Popeye at the Fleischer animation studio from 1935 to 1936. His next move would be a long-term association with Caniff, as explained by Bruce Canwell in The Complete Terry and the Pirates: 1937-1938 (2007):

…Caniff and [Noel] Sickles had combined forces and opened their small studio, where Sickles wrote and drew the daily aviation strip Scorchy Smith while Caniff launched the daily-and-Sunday Terry and the Pirates. “It was at that time,” Caniff said as part of a 1982 interview, “we decided that between the two of us, we’d hire a lettering man. We went back to Engli…Between Sickles and me, we were able to afford to have him quit his job and come to work for us. He was glad to be able to leave the [Fleischer Studios]. It was a backbreaker—hell on the eyes.”

Caniff’s procedure is to get a mental synopsis of what he is going to do. He plans the sequence while reading or listening to the radio, then has to document it by reading from his comprehensive library on the orient and matters military and naval or by searching through his files for pictures of, say, a French locomotive.

He says he spends much more time time on actual documentation than on drawing, but it pays.

He next writes the dialogue. He writes it directly into blocked-out cardboard strip forms in pencil, and Frank Engli, one of his two assistants (Engli draws “Rocky, the Stone Age Kid,” and Ray Bailey, his other assistant, draws “Vesta West”), checks the words for spelling and accuracy (not long ago Caniff used a verse from the army air corps song; he used two wrong words; Engli corrected this) and inks them in.

Life Magazine, January 6, 1941, published a photograph of Caniff’s studio with Caniff, Engli, and the secretary at work. Engli lettered Terry during Caniff’s tenure which ended in 1946. He followed Caniff on his next project, Steve Canyon, from 1947 to 1975.

In the 1940 census, Engli, his wife and daughter, both named Mary, lived in Clarkstown, Rockland County, New York on Old Greenbush Road. He was syndicate cartoonist. The strip he produced for the Chicago Tribune Comic Book was Rocky the Stone Age Kid, which ran from August 25, 1940 to October 31, 1943. Two years later Looking Back began on December 30, 1945 and ended on May 25, 1947. 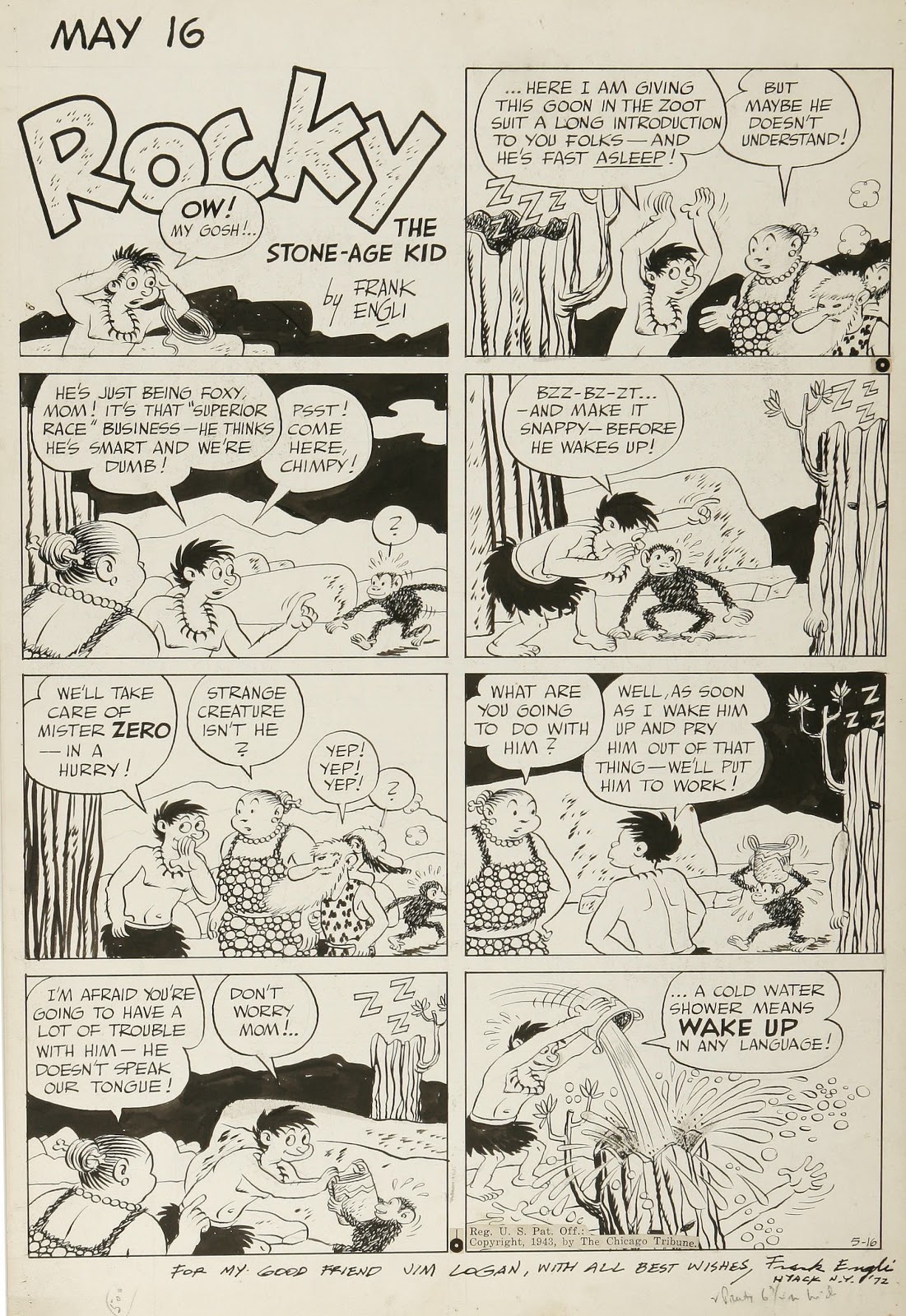 During the rest of August an exhibition of cartoons, drawings, and illustrations by 15 Rockland County cartoonists and illustrators will hang in the Tappan Zee National Bank, Main Street, Nyack.

…The county cartoonists and illustrators, all with established national or area reputations, are exhibiting 89 pieces.

The Telegram, November 20, 1958, reported the Theater Arts Ball for the benefit of a fund drive. In the category for best costume representing a play or character: “…Third prize, a man’s leather jewel case from the Penguin Shop, Nyack, went to Frank Engli, of Upper Nyack, who was easily recognized as one of the most famous of all ‘show business’ figures—Emmett Kelley, the sad circus clown.”

Caniff was profiled again in World-Herald Magazine, February 2, 1975, on his Steve Canyon strip. Caniff said: “…I take a ruled Sunday page, which Frank Engli (an associate) has already prepared, rough out in pencil what will be involved as far as drawing is concerned, indicate wording for the balloons, then send it off to Frank (in Tucson, Ariz.) who does the lettering in ink. Next, Engli sends the page on to Dick Rockwell (a nephew of Norman) in Peekskill, New York…”

Canwell said: “…Engli worked on the first ten thousand-plus Canyon strips before retiring in 1977, shortly before his death….” Engli passed away February 16, 1977, in Los Angeles, California, according to the California Death Index at Ancestry.com.